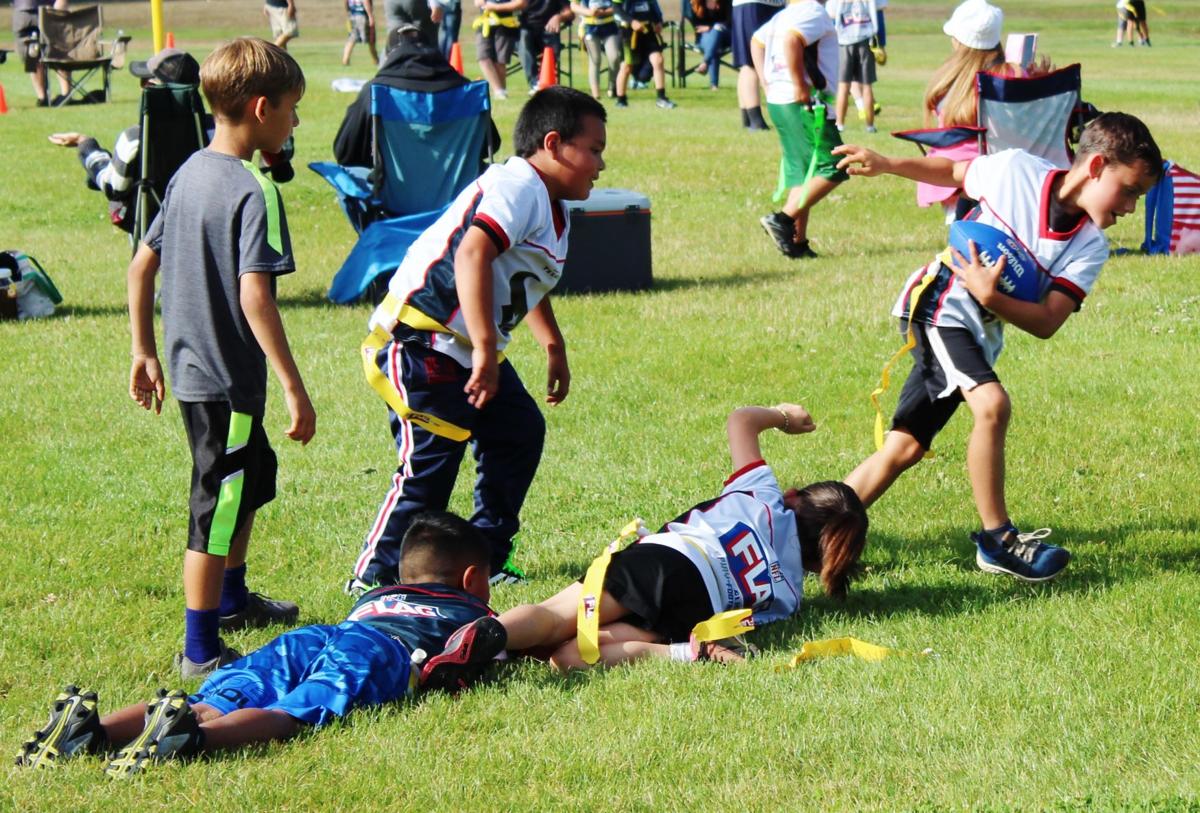 The south-coast weather couldn’t have been nicer as kids ran, jumped, hiked the ball, and passed to teammates from respective teams bearing the names of NFL squads.

Meanwhile, parents and friends of the campers, kindergarteners through eighth grade, gathered along the sidelines to rest in lawn chairs, snap photos, chit chat, and generally enjoy the day.

Brookings Harbor High School football coach Shaun Bravaro heads up the Wild Rivers interstate co-ed venue, which is in its fourth year and was started by the high school’s then-defensive coordinator, Alonzo Nalls, who Bravaro credits with the vision to involve young players in summertime football.

Meantime, if you think flag football is just for boys, guess again.

Bravaro grins: “Yeah, we have lots of girls signed up to play, and that’s great!”

Bravaro said the nationwide NFL flag camps benefit not only the kids, who are out having fun and getting some exercise, but the local game of football overall.

Bravaro and his fellow coaches are able to help the young players learn some of the fundamentals of amateur football. “Ultimately,” he said, “some of them will grow up to play football on area high school football teams, and the knowledge learned here goes a long way to preparing them for that.”

Today, there are four teams from four age groups scrimmaging down on the field. The teams are from Gold Beach and Brookings, with kids from Del Norte County mixed in on the Brookings teams, said Bravaro. Two-thirds of the participants are from Brookings.

“The teams typically get to play six games a year and some of them are double-headers” Bravaro said.

In flag football, no helmets or pads are worn, no blocking or tackling is allowed. The offense is primarily catching and running the ball in the open field.

The goal of the opposing defense is to pull the bright-yellow flag from the ball carrier’s belt to represent tackling the runner.

The emphasis, Bravado said, is on “safety and fun!”

During the camp, practices are hold on Mondays and Wednesdays for about an hour, with game days on Tuesdays. The summer season wrapped up a few days ago.

As one of the sessions winds down, two mothers, Maria and Kendall, watch their children from the grassy edges of the field, enjoying the sun and each other’s company. What do they think of the NFL flag program?

“I think it’s great! “ said Maria, nudging her friend. “ It gets them off of the couch, away from the video games, and out having fun.” Kendall nods in agreement.

For more information about the NFL flag football program, e-mail Bravaro at shaunb@brookings.k12.or.us.