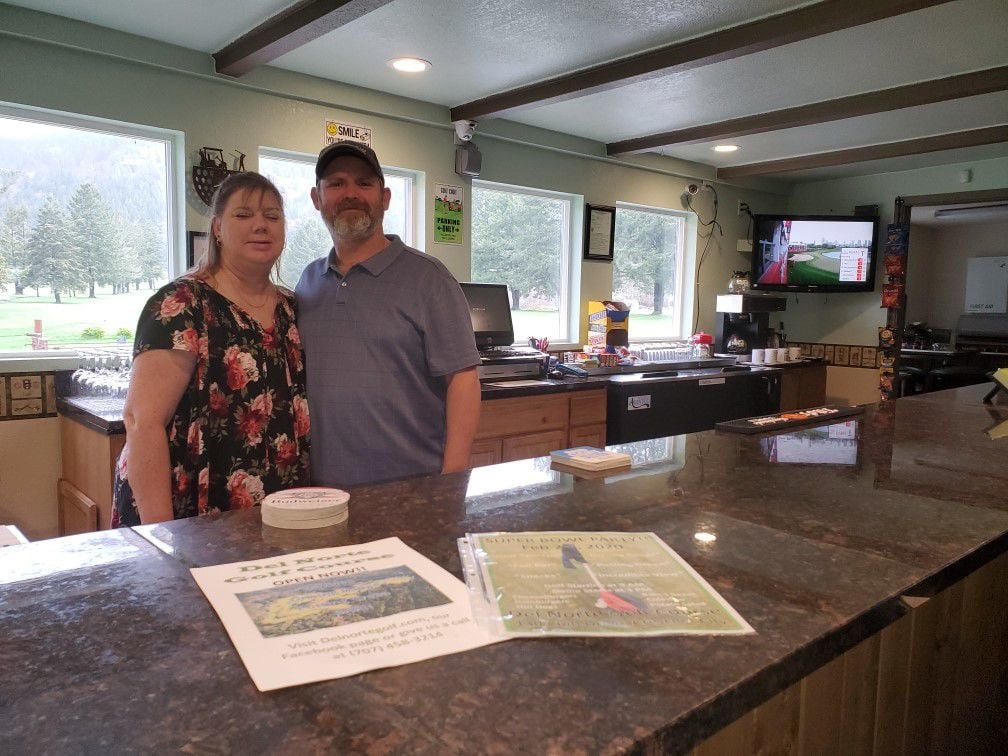 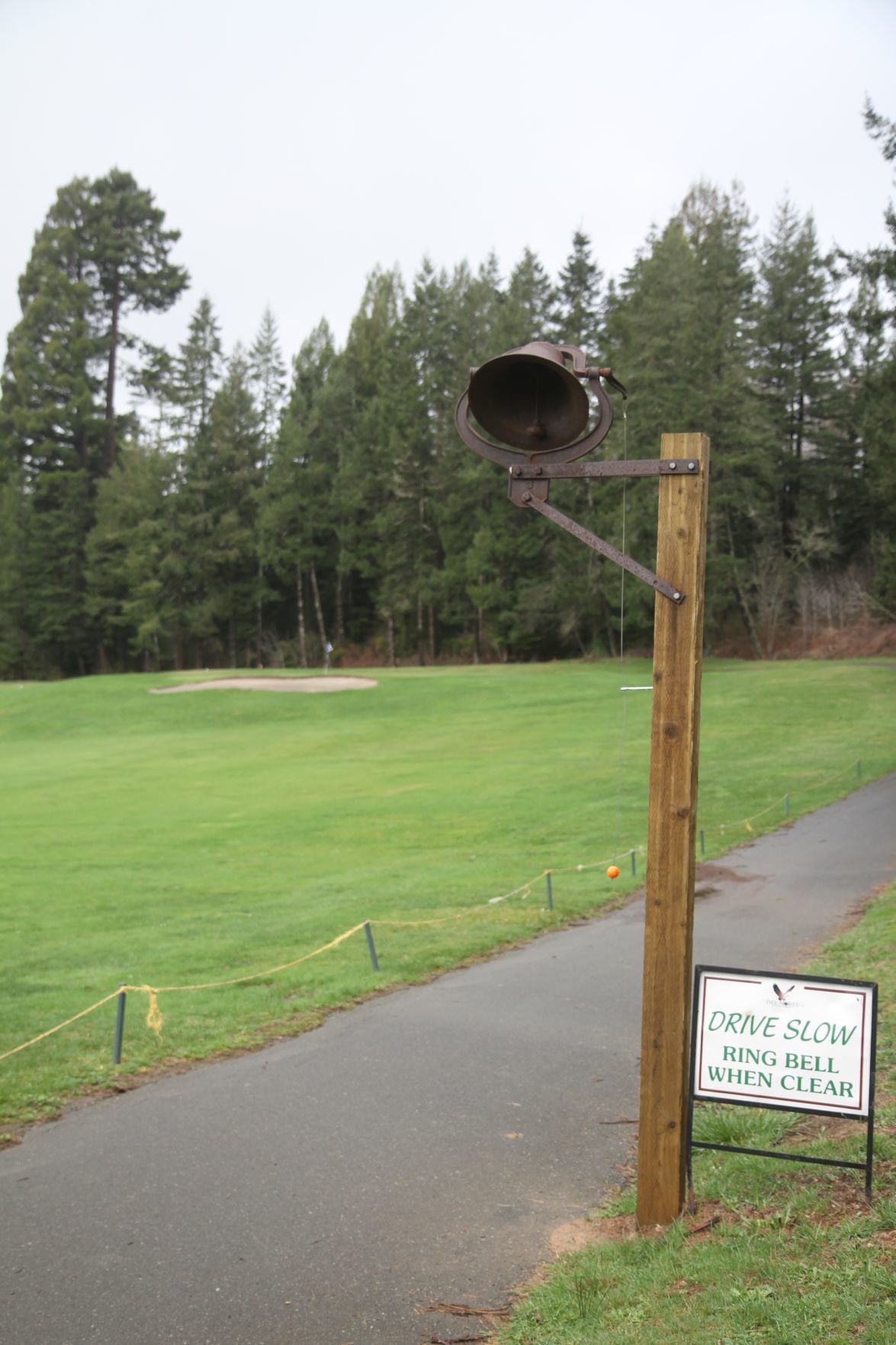 The Martin family brought a bell from the old Illinois family farm to use on the blind fairway to let the following groups know it’s safe to swing away. Photo by David Hayes. 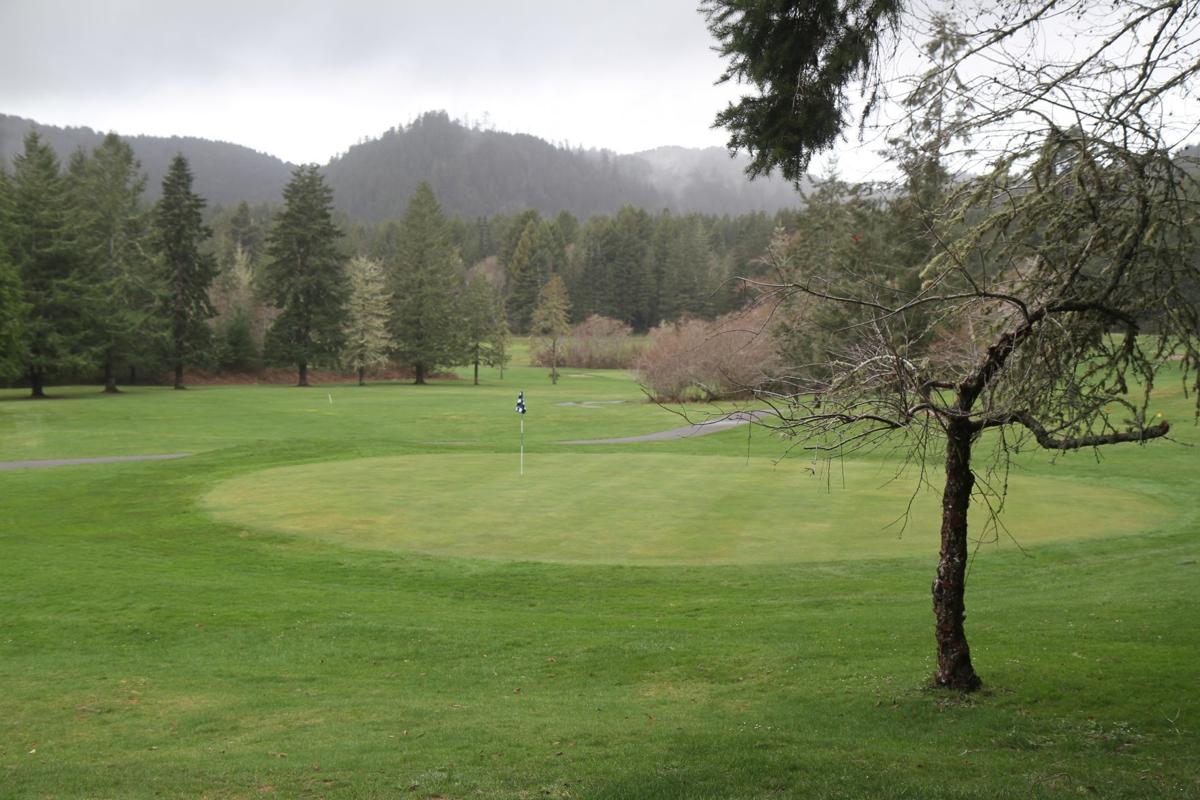 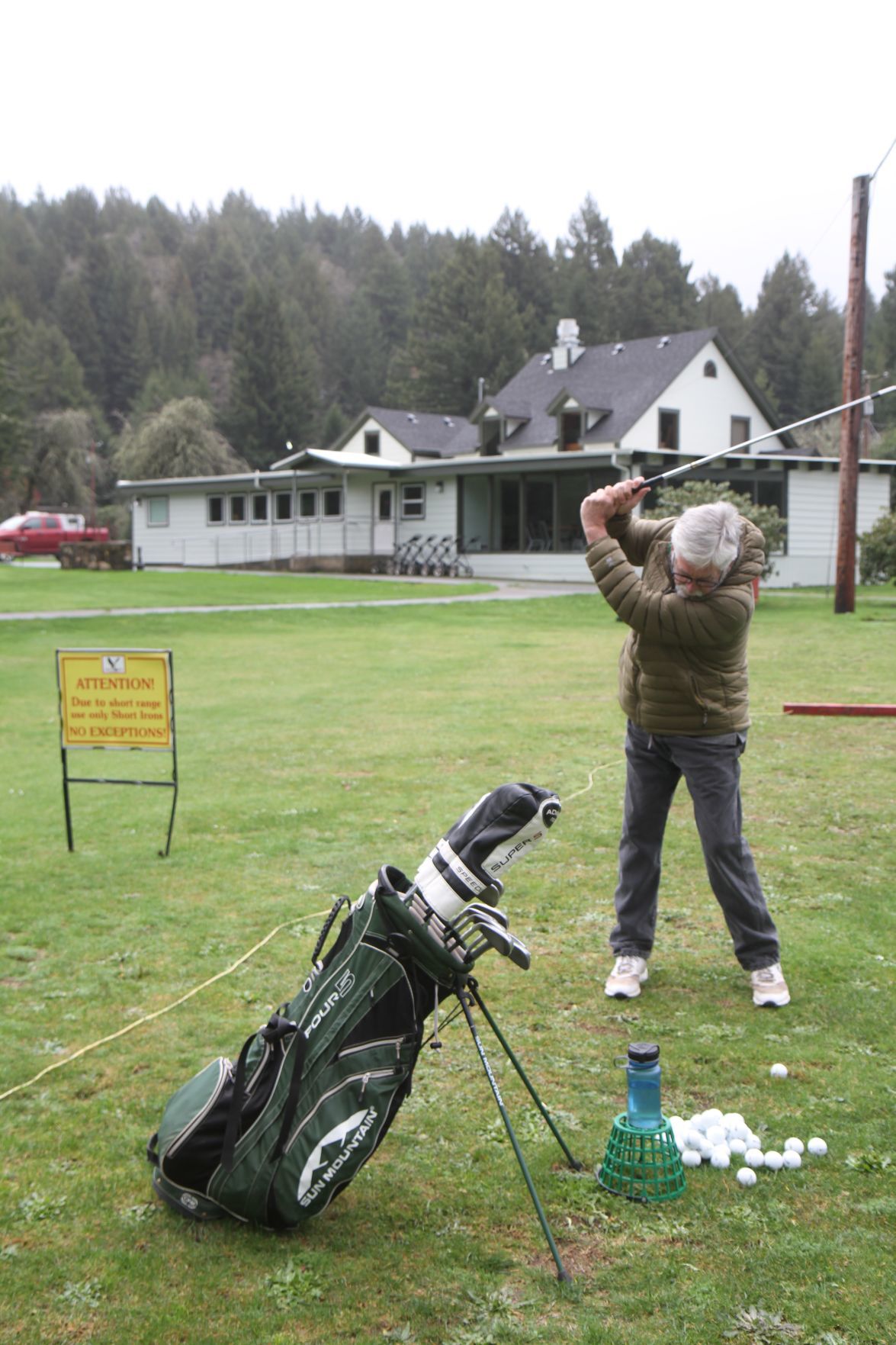 Philip Bright, of Crescent City, hits some balls at the driving range before hitting the links at the reopened Del Norte Golf Course. Photo by David Hayes. 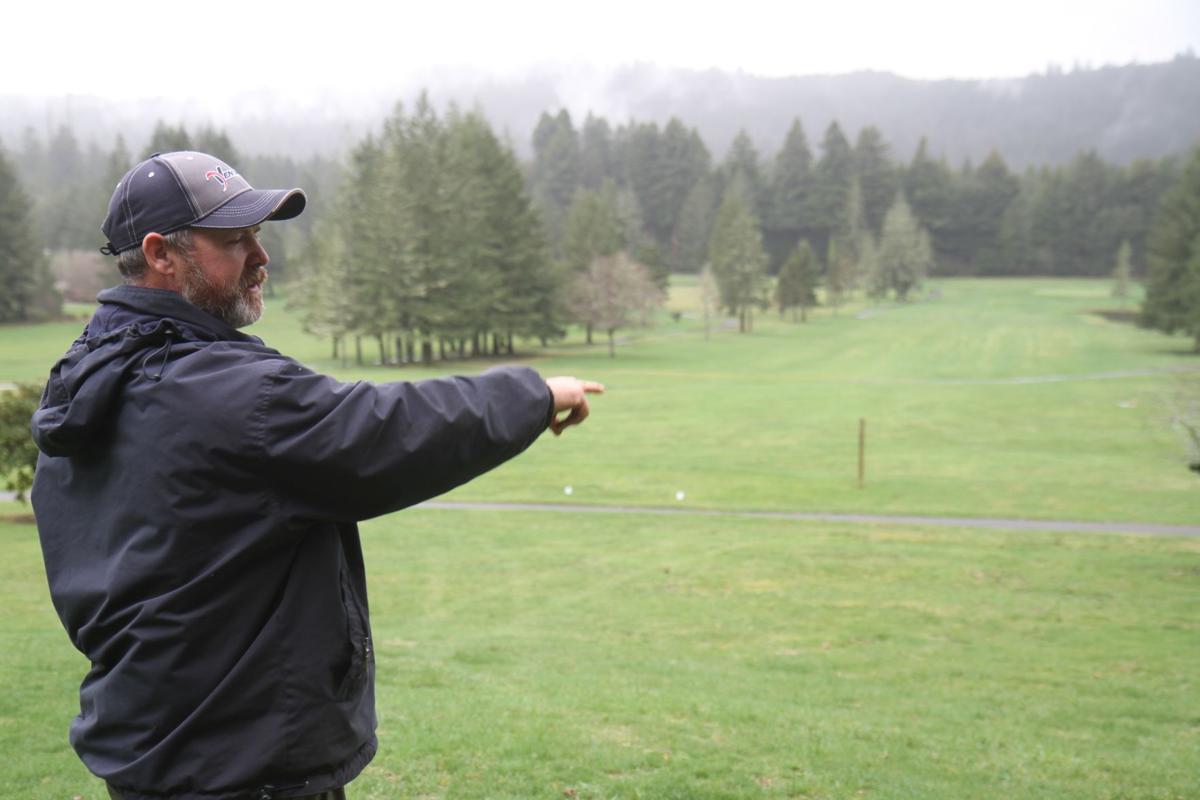 Alan Martin explains all the work that went into bringing back the Del Norte Golf Course. Photo by David Hayes.

The Martin family brought a bell from the old Illinois family farm to use on the blind fairway to let the following groups know it’s safe to swing away. Photo by David Hayes.

Philip Bright, of Crescent City, hits some balls at the driving range before hitting the links at the reopened Del Norte Golf Course. Photo by David Hayes.

Alan Martin explains all the work that went into bringing back the Del Norte Golf Course. Photo by David Hayes.

In January, after an early morning rainstorm swept over the region, Crescent City resident Philip Bright weighed his options for the day’s activity and decided to hit the links.

The option became available locally with the reopening of the Del Norte Golf Course, 130 Club Dr., Crescent City, last month after being closed for more than two years.

Bright, 72, said he used to play a round a golf a couple of times a week before the course closed due to declining attendance and maintenance.

“Everybody I know who plays golf is delighted it’s reopened,” Bright said in between practice swings on the course's driving range.

Jim Martin purchased the defunct course, located about halfway between Crescent City and Brookings off Highway 197, from the Elk Valley Rancheria Tribe last July. The longtime contractor turned his years of experience building homes, condos and townhouses toward resuscitating the course with the help of his son, Alan.

Alan said it took months of patience to cut back the overgrown brush and cultivate the greens back into playable shape.

“You can’t rush the turf by cutting it down to a quarter-inch and think it’s ready,” Alan explained. “We wanted to get it open the soonest we could, but it took time to work the things that needed to be worked to get it into good shape.”

Nestled within the hills, Alan said he’s ready to see the greens on the Del Norte Golf Course get used by actual golfers, and not as a congregating spot for roaming elk herds.

“We’d come out some mornings and have to repair big divots left by the elk. I don’t understand why they hang out on the greens. There’s nothing to graze on there,” he said.

In addition to making the fairways more accommodating, the Martins have also renovated the clubhouse, making it more inviting for golfers and community members looking for a place to host events.

Alan said they opened up the banquet room, with a custom-built barn door crafted by his dad, which can now seat between 40 and 50 for parties or meetings.

The walls, which were all pasty white, now have a golf-themed wallpaper and aesthetic throughout. The carpet is new, there are new high-top tables to eat from their limited menu (so far) and the picture windows now offer a clear view looking out on the course.

His wife Bobbie said they’ve already booked a wedding event for the summer and a birthday party next month. They’re in negotiations to get catering from Hiouchi Cafe and Juanita’s Food Truck and other businesses to draw in more than just golfers to the clubhouse.

Word has already gotten out they’re open for business.

“After a nice day we had, a few golfers come out and were smiling after their round. That makes our day,” Alan said. “And a 3-year-old girl was out there with her clubs. That’s what this is all about, introducing the course to a whole new generation.”

The older generation is pleased the course is back open, too. Don Olson, the Men’s Golf Club President, is happy to get his members back on local links.

“We’re very happy. It’s a great addition to the county because a lot of people like to play golf, but had to go to Grants Pass or Medford or Bandon, just to find a place to play,” Olson said. “The Martin family has done a fabulous job of rehabbing the greens. For the most part, the course was unattended for a year and a half. It got dried out and damaged. But now, it’s respectable again. They’ve cleared the brush. It was a constant battle keeping the weeds and brush back. So, the place looks sharp and greatly improved.”

In addition, the Men’s Golf Club looks forward to filling its tournament schedule again which runs from Feb. 29 through October. He’s especially excited to see the return of the Bill Speer Memorial Tournament, which had to be held for the first time in decades in Weed last year.

“The Speer family is looking forward to coming back to Del Norte,” Olson said of the club’s founding family.

Olson said the Men’s Club has 70 members and he’s trying to reconnect with another 30. He welcomes new members for just a $20 annual fee, which can be dropped off at the course or by calling him at 707-218-6344.

Wayne Bolman was one member who didn’t need any convincing to return to the reopened Del Norte Golf Course. Bolman, 84, lives across the street and has witnessed its slow progression back to playability.

“It’s wonderful. The Martin boys have done a tremendous job on it. It’s a very, very good course,” said Bolman who was the Men’s Club Tournament Director for 45 years. “I’d like to see groups like CASA host tournaments again to bring the girls back and the Rotary Club, in addition to the Men’s Club and Del Norte Women’s Club, too.”

Bolman said the 9-hole course, which also has additional tees to hit from to provide an 18-hole experience, is good for hosting tournaments and is easy enough for beginners and challenging enough for advanced golfers with pretty good slopes on its greens.

“Any course you’re going to lose golf balls if you don’t hit them where you want to,” he joked.

The Martin family hopes the community once again loses themselves at the reopened course, be it for golfing or hanging out for a family barbecue. They are planning a grand opening celebration sometime in the spring. They recommend checking for updates on their revamped website, www.delnortegolf.com.

Is it time for Gov. Brown to reopen the state and lift all restrictions, like California?