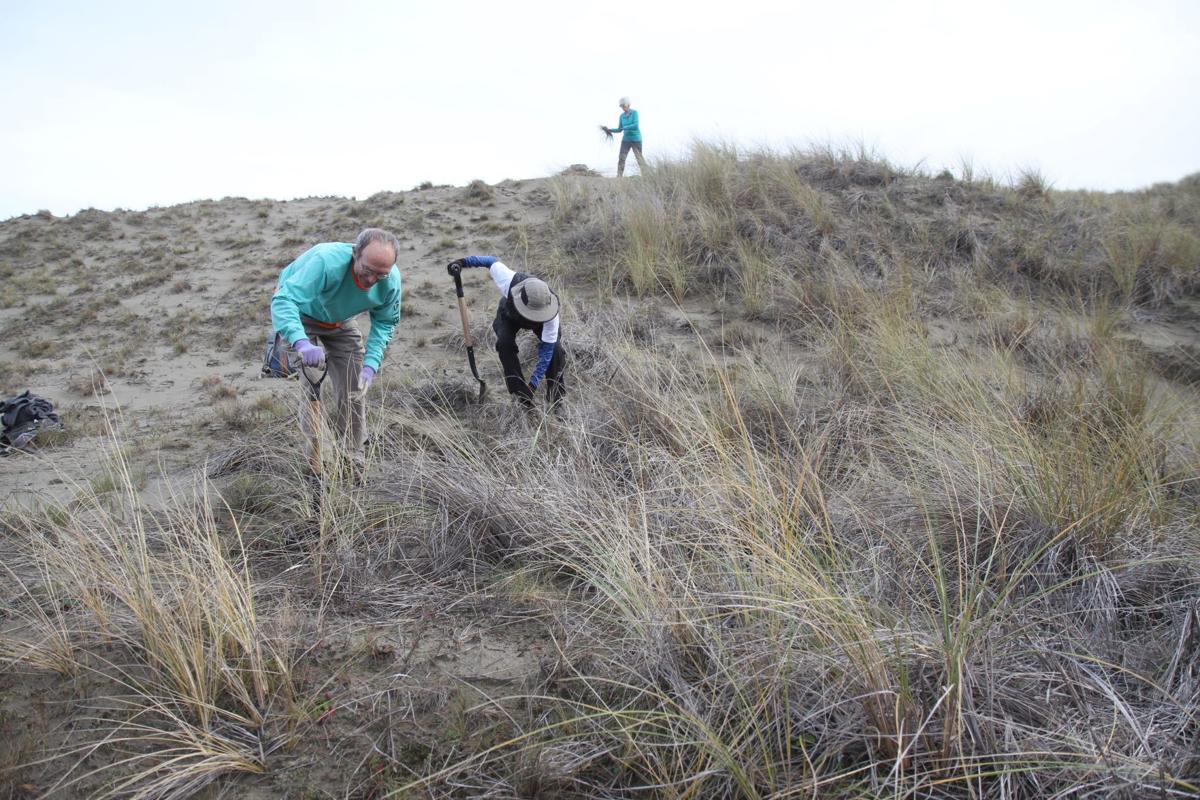 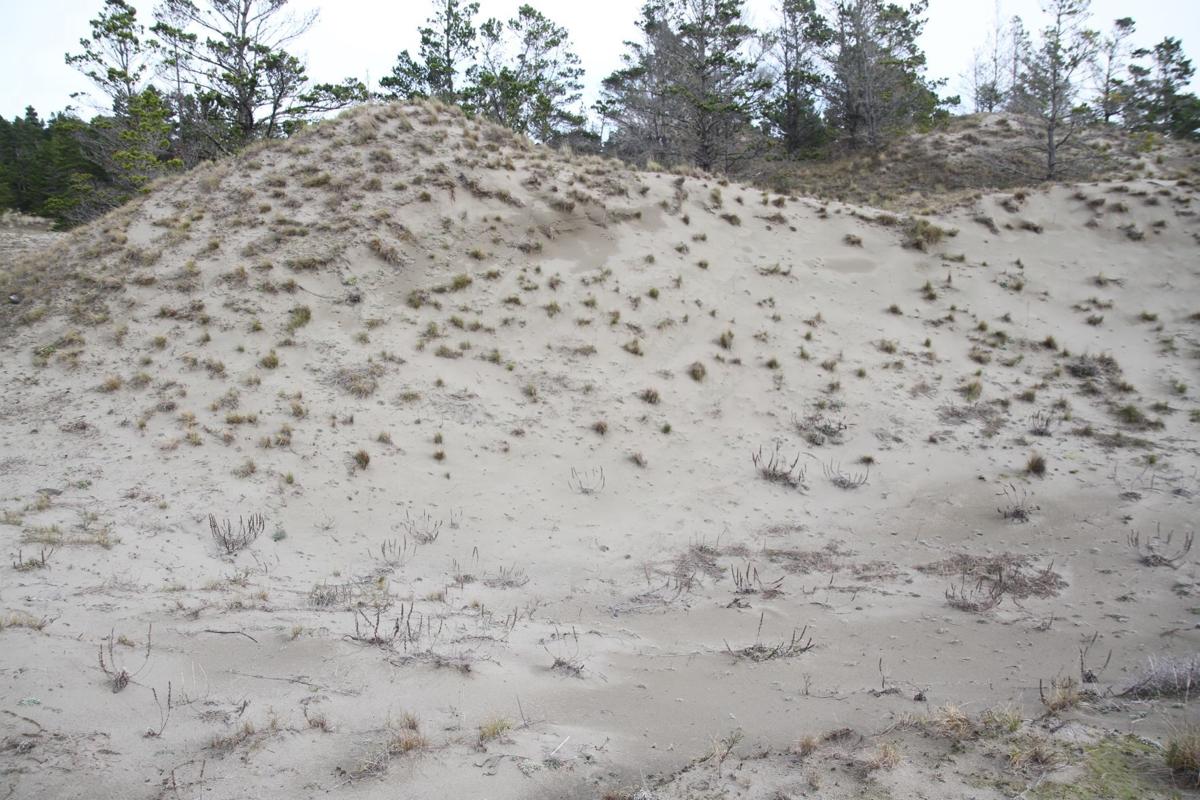 An area of South Big Dune, once awash in English beach grass, has been cleared by the Tolowa Dunes Stewards. Photo by David Hayes. 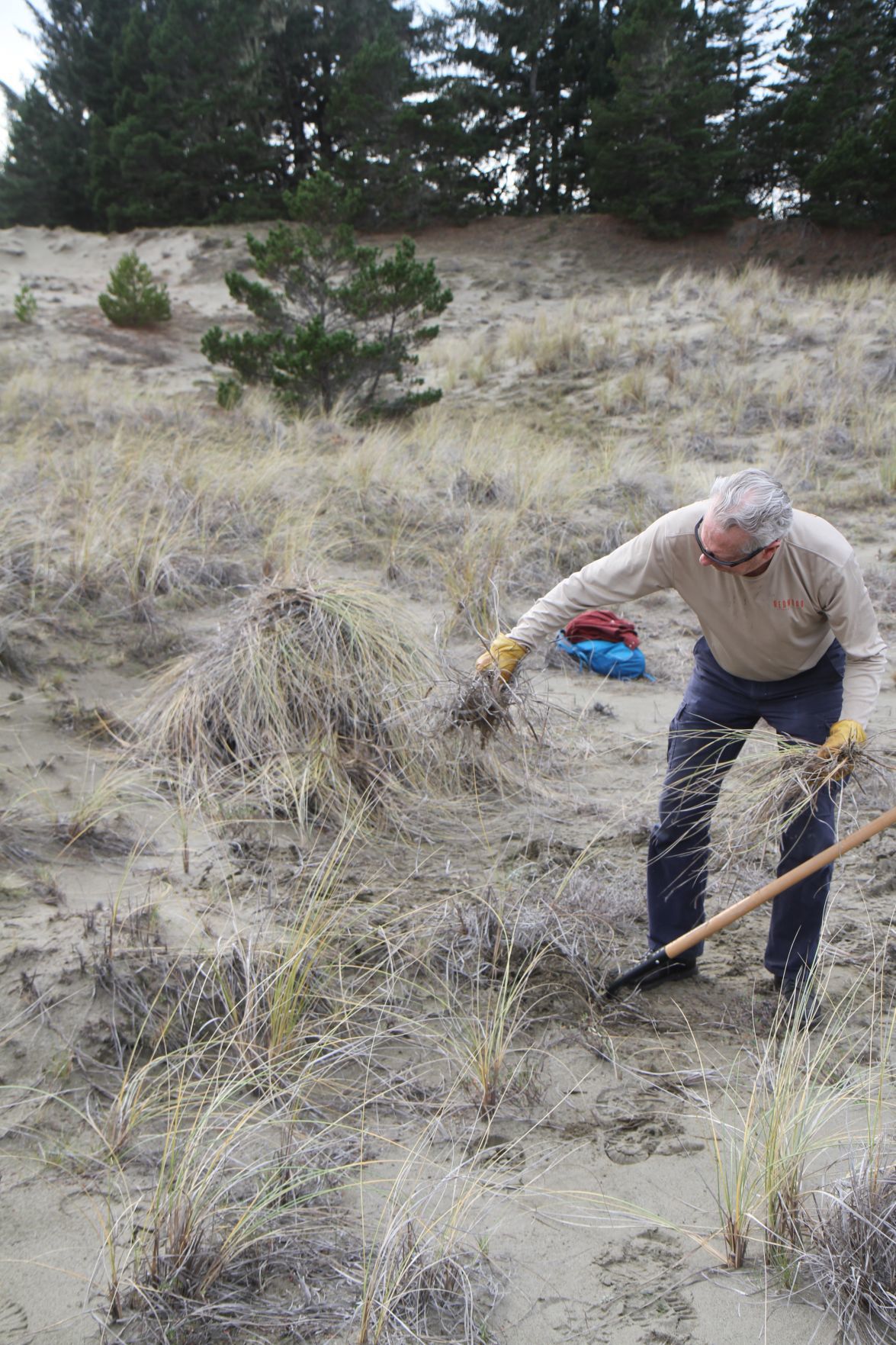 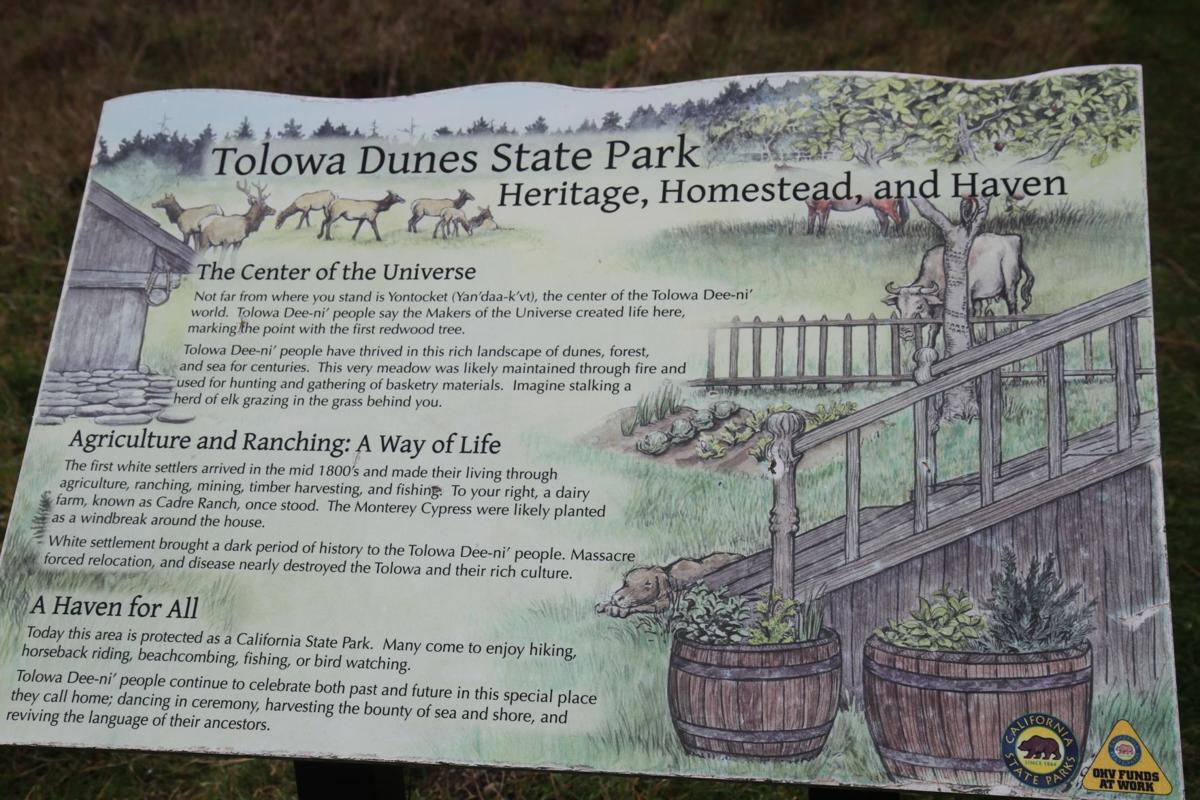 An area of South Big Dune, once awash in English beach grass, has been cleared by the Tolowa Dunes Stewards. Photo by David Hayes.

More than a century after Europeans settled on the West Coast, Del Norte County volunteers are still cleaning up after them.

Specifically, the plants they brought with them.

Those plants now are classified as invasive species, and they’re crowding out native varieties.

According to Sandra Jerabeck, director of Tolowa Dunes Stewards, the organization’s volunteers are removing the species that the European settlers didn’t realize were invasive.

“When European settlers came here, they brought what they were comfortable with, in terms of plants and animals. Those plants - English ivy, English holly - they brought because they liked it.

“There was no understanding at that time what it could do to this environment. Where it doesn’t have any controls or predators, like those built into our environment, it just takes over and you have nothing but English ivy.

“It will kill all the trees, the forest, it will cover the ground so thickly you’ll have nothing else growing,” Jerabeck said.

The volunteers with Tolowa Dunes Stewards have been focusing their efforts on removing the English beach grass.

Over the decades, the grass grew unchecked, creating a sea of plants that were crowding out local varieties such as the rare Tolowa coast wallflower, which Jerabeck said probably doesn’t exist anywhere else in the world.

She and a rotating group of volunteers have been digging up invasive species at Tolowa Dunes State Park for 16 years.

Jerabeck said the California Department of Parks and Recreation asked for help because it had run out of money to pay crews for the work.

“In terms of all our public lands, the money they used to have for work like this is gone. They are very underfunded. They can’t do their job without volunteer support.

There are 11,000 acres of public land in the Tolowa Dune State Park area. Tolowa Dunes Stewards has been concentrating primarily on the South Big Dune and South Lake Toloway areas.

Located a couple of miles north of Crescent City, there’s no road leading all of the way to South Big Dune. So, the volunteers must park at the end of Old Mill Road and hike more than a mile inland to reach the dune.

They fight back the dunes’ English beach grass twice a month, and tackle other invasive species when they can by removing English ivy, Scotch broom, tansy ragwort, English holly and other, less well-known invasives.

A growing threat, said Jerabeck, is pampas grass. “I think for this community, it would be really important if everyone removed some English ivy and pampas grass where they live,” she said.

“Because English ivy is going to eat the community. It kills our trees. It smothers them. It’s very heavy. Even redwood trees can be killed by English ivy.

“I know that people care about this, they just don’t understand how it works,” she said.

For 16 years, the Tolowa Dunes Stewards have concentrated their efforts within the 30 acres of South Big Dune. Jeraback said that close to half that area has been restored and is under maintenance.

“It’s an enormous accomplishment,” she said. The work is hard going.

As a result, nearly 10,000 pounds of the invasive plant were removed from the county’s lands.

Gilbert has also been volunteering with the Tolowa Dunes Stewards for years. “We can get the grass out,” she said, “and it has a really good chance of the native plants taking over, with minimal maintenance required.

“You can actually see what you’ve accomplished. That’s one of the beauties.

“It’s sort of daunting,” said Gilbert. “It’s definitely hand/shovel labor, but you get a really great sense of being out in nature and enjoying it. There’s a peaceful meditation to it.

“We enjoy working as a group. But we work individually, too. So, it’s like having a Zen moment, working but feeling good about it.”

Jeraback said that once the English beach grass is pulled, it’s disposed of in one of two ways. Sometimes, it’s piled high and burned. Other times, it’s placed on a tarp to dry out and die.

Either way, the stewards return to cleared areas regularly to check for re-sprouts, as the grass has yards-long running roots that can easily be missed.

“You have to pick your fight,” said Jerabeck. “You have to pick locations where once you remove it, you can maintain it. Because it’s surrounded by water or forest, most of Big Dune has that protection. Once it’s finished, it will be maintainable.”

Volunteers Leonard and Joan De Vries split their time between living in Crescent City and Seattle. When they’ve here, they said they always find time to volunteer with the Tolowa Dune Stewards.

“I don’t know how we heard about this,” Leonard said, “but it seemed like a really nice way to contribute something to the environment. We both enjoy the outdoors. I enjoy working with my hands.

“The area is sublime. Beautiful. You feel like you’re doing something good but having a lot of fun at the same time.”

Tom Trueblood said that after 30 years of living in Sacramento, he relocated to Crescent City to move his mother away from the record heat there. An avid bicyclist, Trueblood said he’s been volunteering about a year and a half at the dunes and couldn’t think of a better place to help the environment.

“I especially like it when we work at the big cut to save silver phacelia, a very endangered species. Few known places have it. It’s beautiful little plants. Gorgeous. Plus, it’s good exercise,” said the 69-year-old Trueblood.

“Older people are supposed to still go out and do stuff. I may go home a little sore, but a day or two later I’m fine. And I know I’ve helped. It’s good. Healthy.

“Plus, I like the people. During snack time, we sit around and enjoy each other’s company.”

Jerabeck invites others to join their group of volunteers by going to facebook.com/tolowadunesstewards, or by calling her at 707-954-5253.