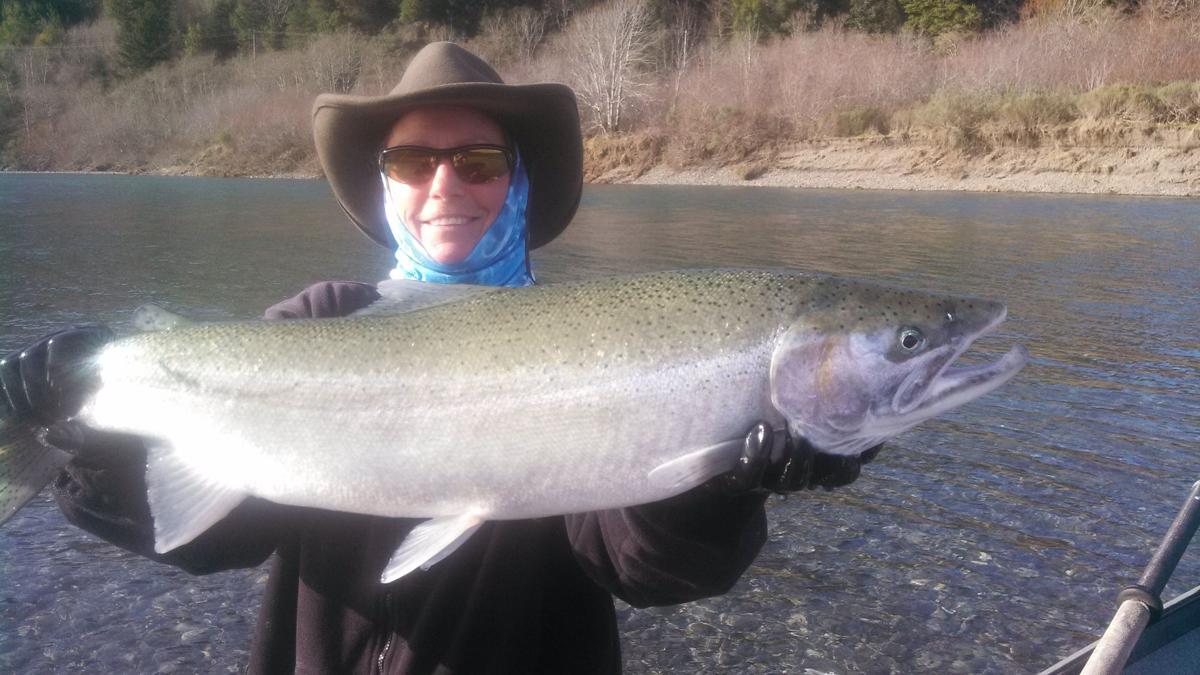 An Oregon Department of Fish and Wildlife employee shows a native steelhead harvested for the Chetco River hatchery program in 2015. 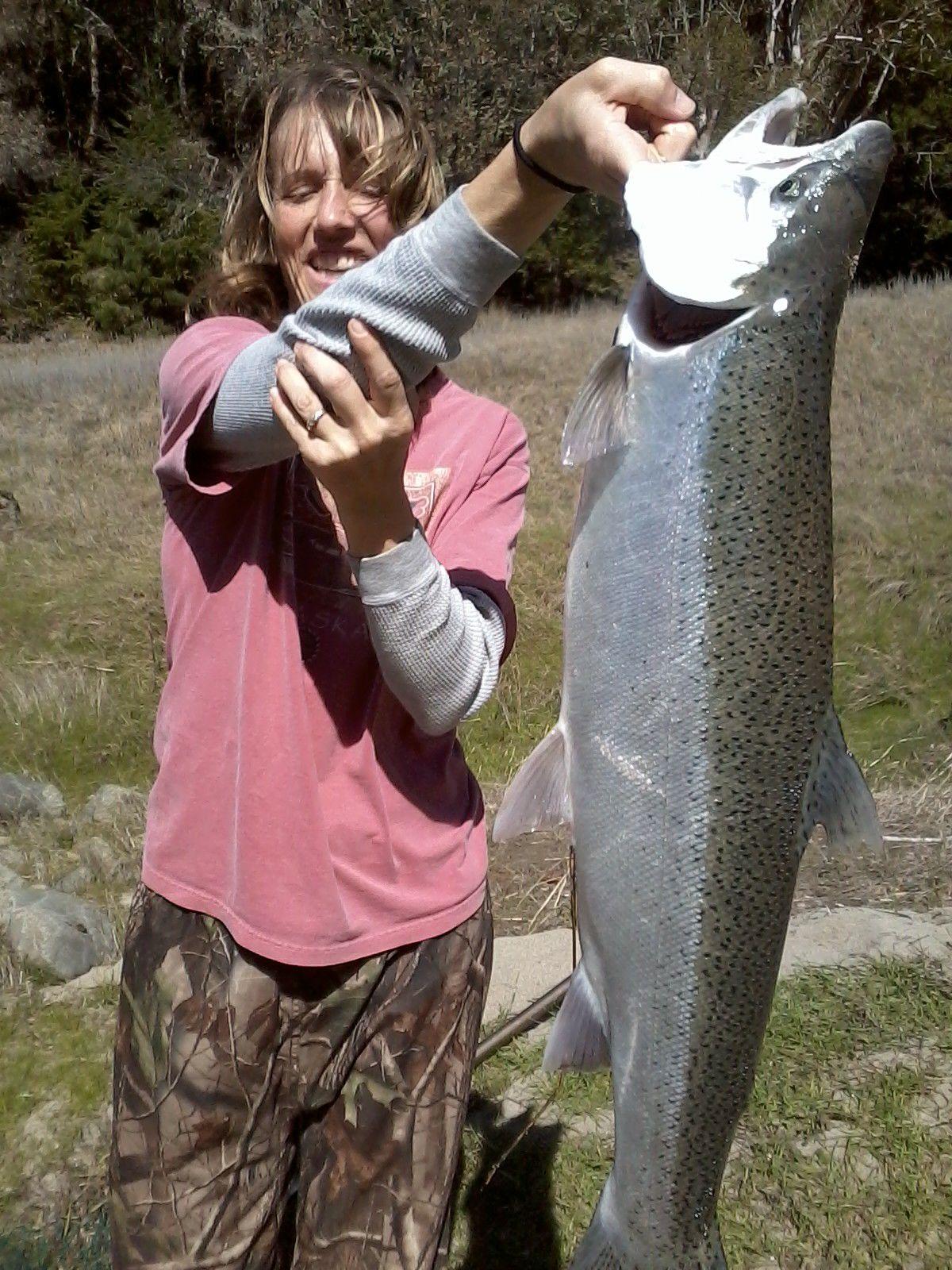 Anna Krug holds up a 20-pound fin-clipped steelhead that came from the Oregon South Coast Fishermen’s hatchery program on the Chetco River.

An Oregon Department of Fish and Wildlife employee shows a native steelhead harvested for the Chetco River hatchery program in 2015.

Anna Krug holds up a 20-pound fin-clipped steelhead that came from the Oregon South Coast Fishermen’s hatchery program on the Chetco River.

A group of five fishermen from across southern Oregon has petitioned the Oregon Fish and Wildlife Commission (ODFW) to make a temporary rule change restricting all harvesting of wild winter steelhead in the entire Oregon Southwest Zone, effective with the 2020 season.

At stake, say opponents of such a rule change, is the winter and spring tourism industry throughout Oregon’s south coast.

Those opponents point to the Smith River, 10 miles to the south, where local economies in towns such as Crescent City, Smith River, Gasquet and Hiouchi were negatively affected following a similar change.

“The Smith River steelhead fishery and its local economy are but a shadow of what they were before they opted for catch and release,” said Leonard Krug, executive director of the South Coast Fishermen in Brookings.

The rule change request was discussed during an ODFW meeting Dec. 6 and has drawn considerable comment from both sides of the fishing community. The public correspondence file in response to the petition stands at 384 pages and continues to grow, given that the public-comment period is still open.

The matter will go to the commission for a vote during a Jan. 17 meeting in Salem.

The current regulation allows one wild steelhead to be taken per day, and a total of three for the entire year.

A previous proposal, for permanent prohibition of wild steelhead harvesting in the Southwest Zone, was made in August 2018, according to an ODFW summary. At that time, the commission denied the petition, but did lower the harvest limit from a total of five per year to three.

It also directed its staff to “address permanent harvest regulations” while developing a conservation plan, including a comprehensive assessment.

Proponents of the recently proposed temporary rule change have the support of the Native Fish Society. Mark Sherwood, the society’s executive director, cited in a Dec. 6 letter a lack of studies and data by ODFW. He urged the commission to “err on the side of caution” if it did not have enough data to provide high confidence that “the current fishery is not overharvesting wild fish.”

Petitioners for the closure drew parallels between low population forecasts and poor ocean conditions, which have prompted protective measures for wild fall Chinook salmon on the Rogue River, as being likely to also impact winter steelhead populations on the entire south coast.

• The closure would increase angling opportunities, since fish that are caught and then released can be caught multiple times

• “Steelhead fishing has been really tough,” with drought and ocean conditions resulting in “a perceived decline with lower than normal returns and reduced catch rates over the last couple of years.”

Local fishermen are opposed to changing the current rule, which Krug says was a “mutual agreement… between all parties to allow the process to work” at a September commission meeting in Bandon.

Krug faults the petitioners’ arguments, saying, “There are NO ‘low population forecasts’ for wild winter steelhead for 2019-20,” and that those forecasts were for a portion of fall Chinook only.

“Steelhead spawn in conditions of high cold water and can access more habitat more easily,” Krug said. “The steelhead in question are the most viable and adaptable salmonid in all of North America.”

As for the notion of “tough fishing,” Krug shrugs it off with, “Steelhead are ‘the fish of a thousand casts.’ They are always tough to catch.”

Oregon South Coast Fishermen reportedly has collected more than 600 signatures supporting the current rules. The group, along with “other Salmon Trout Enhancement Program (STEP) organizations like them, have enhanced and/or increased habitat on these south coast streams by planning, securing funding, and successfully completing many habitat projects over the years,” Krug said.

“It is unfortunate that a special-interest group can petition and attempt to dismantle a proven system that fishermen and biologists have worked so hard to ensure.”

Oregon Department of Fish and Wildlife staff are recommending denying the petition, in favor of maintaining current regulations, in a 10-page report available on the fish and wildlife commission hearing website. The ODFW report cites:

• A conservation plan already under development

• Existing regulations that provide limited opportunities for harvest; of about 5,800 miles of adult steelhead habitat in the Southwest Zone, only 7% (405 miles) are open to wild harvest

• Data from angling tags that indicate few anglers actually harvest up to the annual limits; in the Rogue River, 90% of anglers reported harvesting between 0 and 2 wild winter steelhead annually.

The report goes on to say, “Steelhead populations in the Southwest Zone are limited by environmental conditions, not harvest.” Factors such as passage, sedimentation, in-stream structure, and water quantity and quality (temperature) affect populations more than harvest, according to the report.

The ODFW report also states that eliminating the harvest of wild steelhead is unlikely to result in larger fish in the Rogue River.

“Rogue River steelhead are unique in Oregon,” the report says. “Within 3-5 months of going to sea as smolts, roughly 95% of Rogue River summer steelhead and 30% of winter steelhead turn around and swim back upriver to feed late summer through winter, before heading back to sea for another year or two prior to spawning.

“The Rogue is the only river in Oregon that has this ‘half-pounder’ life history stage (also observed in rivers in northern California).

This specific lifecycle contributes to the species’ resiliency, although it also also results in smaller adult fish because of their shorter ocean residency. Studied since the 1950s, the smaller size of the Rogue fish is “not size-selective harvest occurring under existing regulations.”

Both sides of the issue are passionate, with opponents to the change arguing for ruling “on the side of science,” while proponents for catch and release argue for “protection in the face of uncertainties.”

Weigh in by writing to Oregon Fish and Wildlife Commission, 4034 Fairview Industrial Drive SE, Salem, OR 97302 or by email: odfw.commission@coho2.dfw.state.or.us. Learn more about the issue and read comments from both sides at dfw.state.or.us/agency/commission/minuts/20/01_Jan.