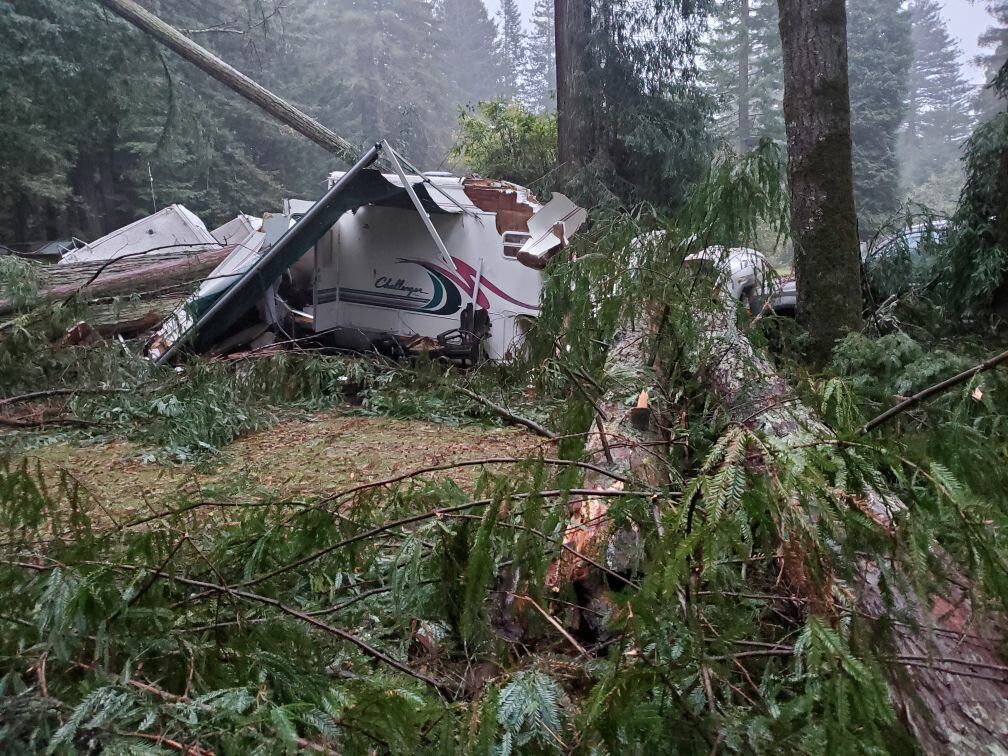 A Redwood tree crushed an empty RV at Rambling Redwoods Campground and RV Park at 6701 Highway 101 during the Tuesday storm. No one was injured. 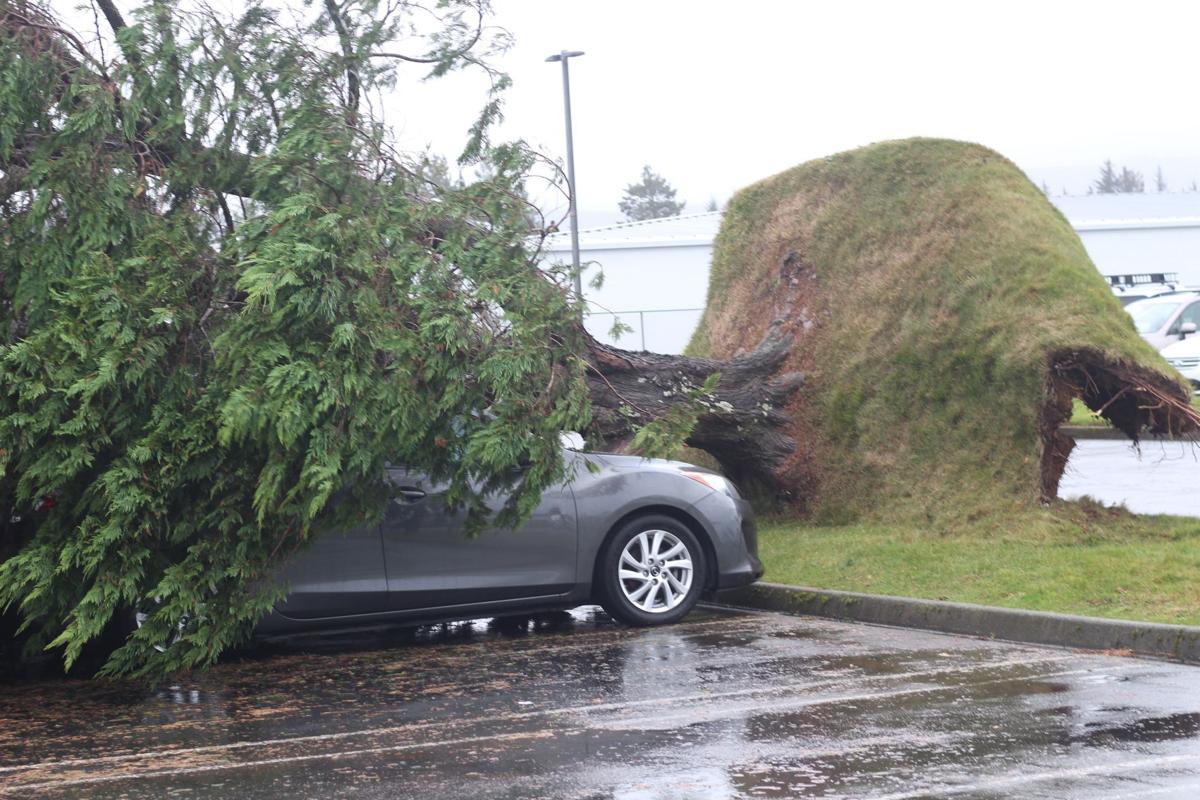 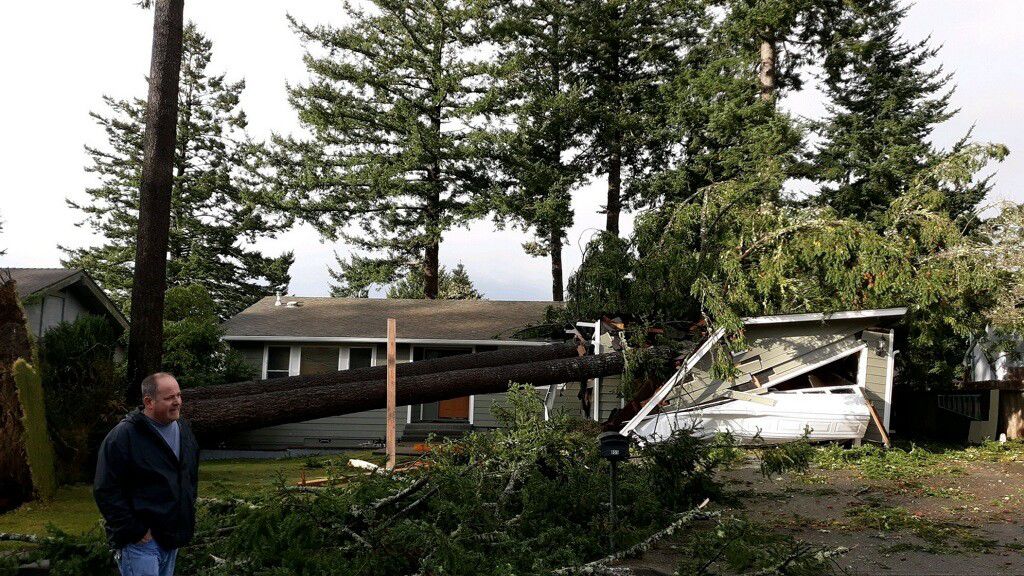 A homeowner assesses the damage when a large tree destroyed his garage on Highland Avenue in Brookings. 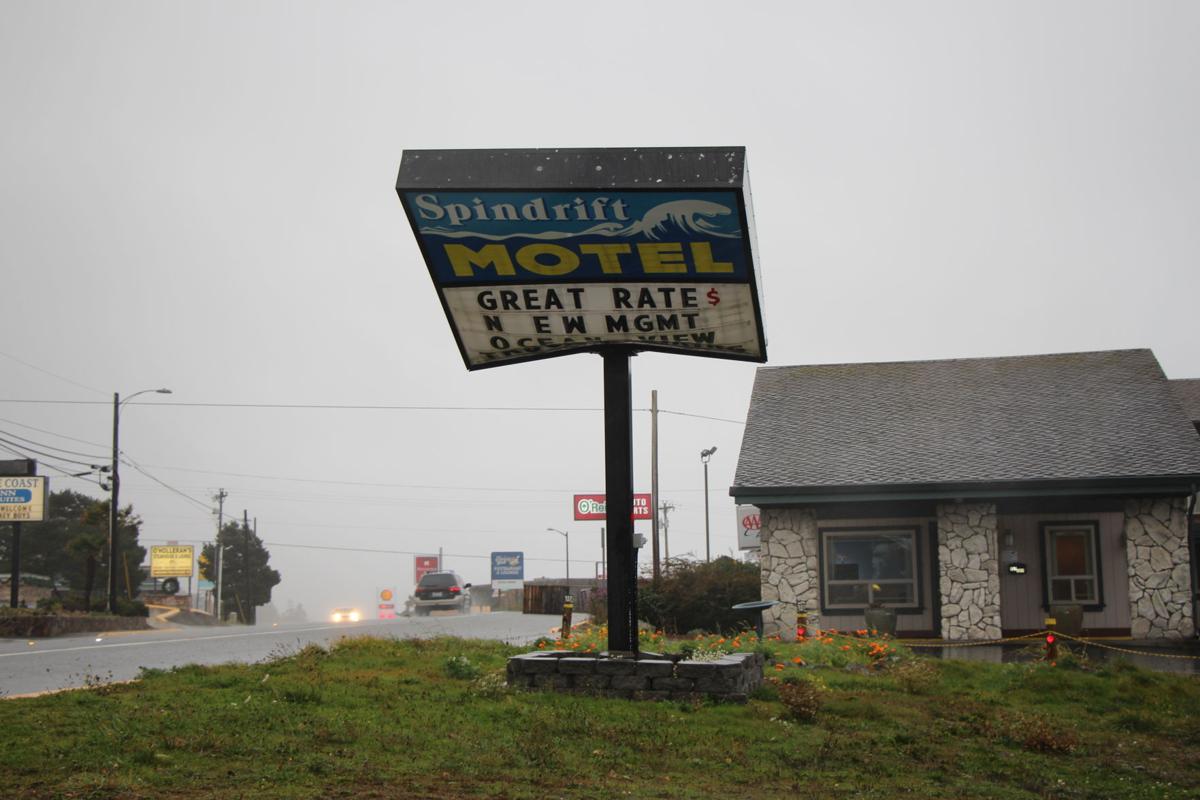 This business sign along Highway 101 in north Brookings was a victim of the strong winds. 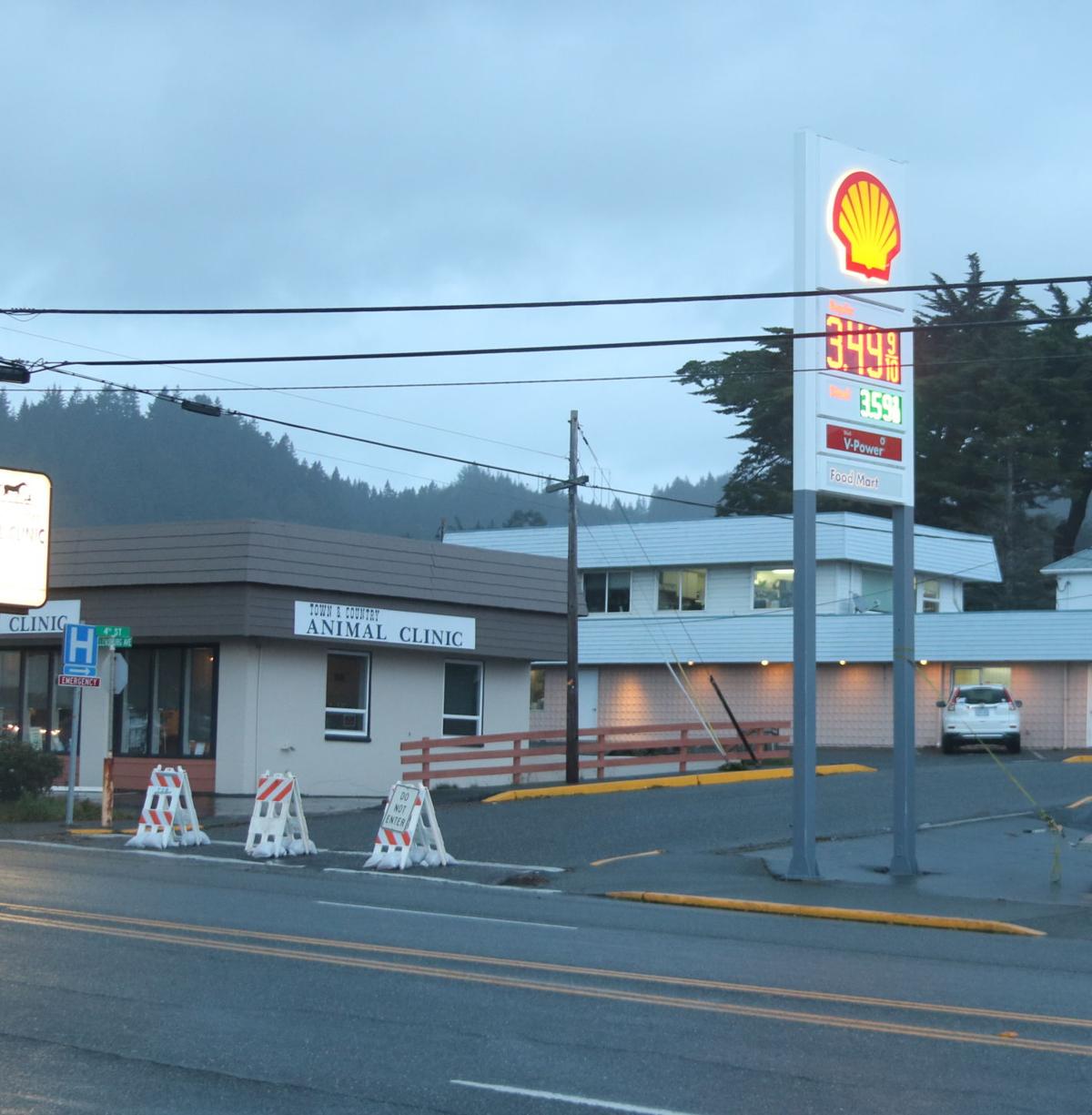 This Gold Beach Shell gas station’s sign was deemed unsafe by the God Beach Police during the storm, so Fourth Street was closed as a precaution. A large U-Haul truck was tied off to the sign, and may have kept it from falling overnight. 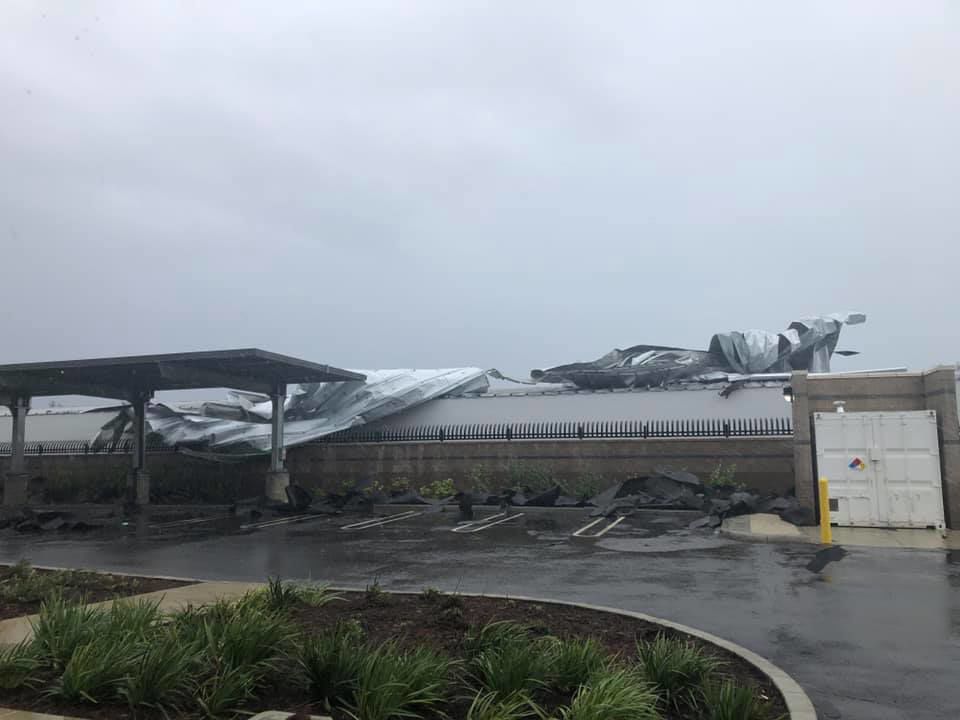 A portion of the roof on one of the Crescent City Ace Hardware store’s lumber buildings was damaged by the wind.

A homeowner assesses the damage when a large tree destroyed his garage on Highland Avenue in Brookings.

This Gold Beach Shell gas station’s sign was deemed unsafe by the God Beach Police during the storm, so Fourth Street was closed as a precaution. A large U-Haul truck was tied off to the sign, and may have kept it from falling overnight.

The clean up from Tuesday's strong wind storm is underway this morning in our region.

The storm left a path of destruction as the winds toppled trees and sent debris flying. As of Wednesday morning, there were no reports of injuries following what forecasters called a “historic bomb cyclone weather system” that swept across Curry and Del Norte counties.

First responders and utility crews were kept busy will a flurry of service calls while drivers and pedestrians dodged the downed trees, fallen electrical wires and other debris in roadways and along sidewalks.

Brookings Police reported no blocked streets by Wednesday morning after city, county and state public works crews removed the debris in the city. Motorists should be prepared to find some outlying roadways that might still be impacted by the downed trees.

In Crescent City, Russell Kinikin, Ace Hardware assistant manager, said at about 1 p.m. one of the lumber buildings lost about 7,000 square feet of roof out of a 120,000 square foot facility. Kinikin said the wind caused no damage to the main store nor to any merchandise or vehicles. The Crescent City Ace Hardware was open for regular business on Wednesday.

Crescent City Manager Eric Wier said the storm kept emergency responders tied up throughout the day on Tuesday and into the night.

“The major issue with this storm was not major rain, but major wind creating a lot of unusual scenarios and power outages,” Wier said.

Emergency calls put a significant demand on the city’s response resources, Wier said. He estimated more than forty 911 calls were received between noon and 9 p.m. Tuesday.

Wier said the 60 mph winds hitting Crescent City combined with the king tides created a storm surge a lot larger than normal. As a result, he said portions of Howe Drive and the B Street Pier were closed. In addition, Wier said the wind caused one trailer tent at the Shoreline RV park to flip and  tore off a portion of the roof at Ace Hardware, located at 840 East Washington Blvd.

“Also, at the Shoreline RV park we asked campers to move back from the beachfront sites due to the high tides. We made sure they had things tied down,” he said.

On the utility side, Wier said many of the 21 lift stations in the city and adjacent areas, which operate the sewers, don’t have generators attached. So throughout the night, crews took generators to these sites to maintain operations. He added the storm also caused issues with communications with the city’s water systems.

“But there were no outages with water and sewer systems. They ran without loss of service throughout the night. We have a lot of tired crews this morning,” Wier said.

He said non essential city staff were sent home about mid day due to brownouts, adding the brownouts can cause substantial damage to city computer systems, that’s why financial services shut down.

“Hats off to Pacific Power as well. Multiple trees came down. We had reports of damaged transmission mains outside town, so we expected a lot longer outages to at least  1 or 2 a.m. But Pacific Power evaluated the situation and had power back on around 11 p.m. That was not expected. It was a welcome site, especially since colder temperatures are expected tonight expected. With a sustained power outage, the drain on our resources would have been substantial,” Wier said.

California Highway Patrol Public Information Officer Brandy Gonzalas said CHP deputies responded call to call to help clear debris and reports of downed power lines. At one point, she said residents lost cell service along Highway 199 due to the weather. She was unable to quantify at this time how many calls CHP came into CHP. Gonzalas said the bottom line is there were no major injuries or fatalities reported.

Pacific Power crews worked throughout the night making repairs to storm-damaged equipment in Northern California and Southern Oregon to restore power to customers affected by a powerful Pacific storm with high winds and heavy snow in the mountains.

According to the utility, the number of customers affected has been reduced significantly from approximately 19,000 at the peak of the storm to approximately 1,700 by 10 a.m. Wednesday. Pacific Power brought in additional crews to continue restoration efforts Wednesday morning .

Jacob Knudsen, marketing and member services manager at Coos-Curry Elector Co-Op, said approximately 3,500 members had power interrupted for more than a few minutes due to the storm.

The utility estimated the majority of the outages would be resolved by Wednesday afternoon.

Knudsen said the outages were caused by branches, trees and debris being blown into the power lines.

"We sustained only minor infrastructure damage with just 3 poles being broken," he said. "Our power grid proved to be very resilient and we weathered a significant weather event with only minor damage. We want to thank our line crews and support staff for their hard work over the past 24 hours and we appreciate our members patience and support as we make repairs."

The wild windstorms of the “bomb cyclone” that struck Curry and Del Norte counties on Nov. 26 were universally awe inspiring, no matter where …