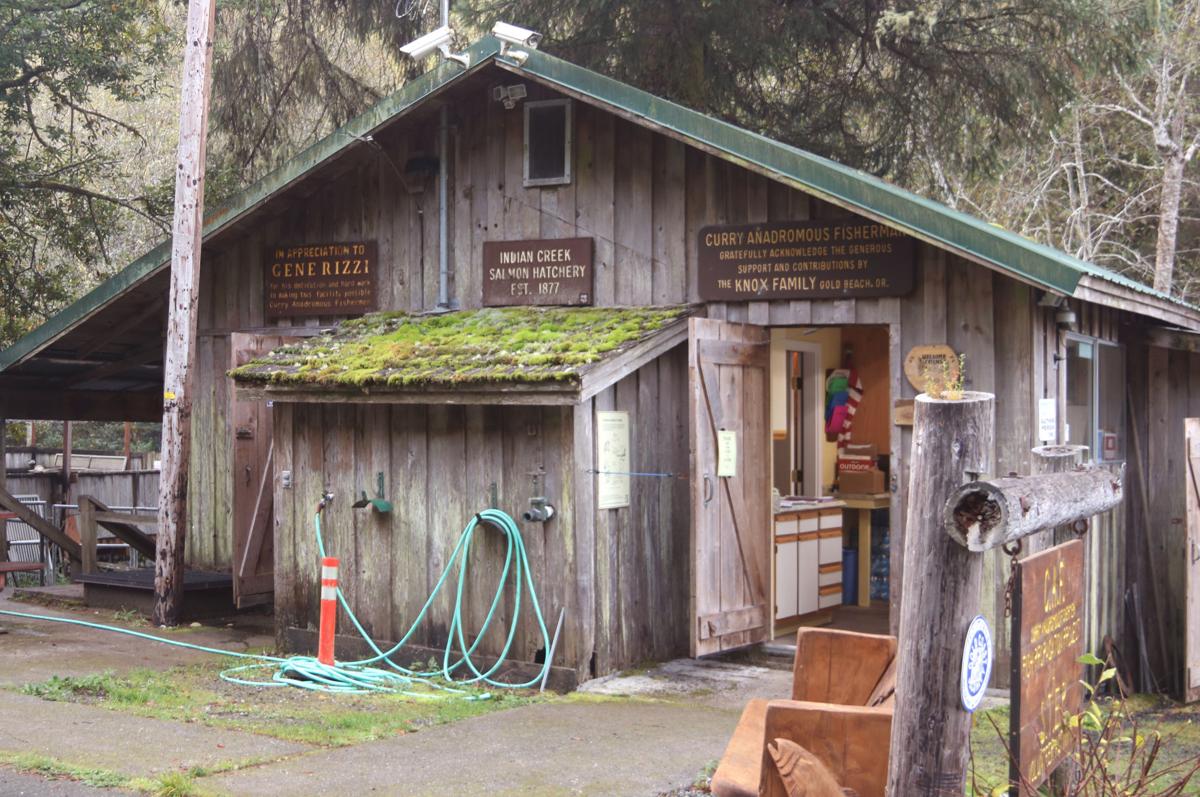 The present-day hatchery building at Indian Creek was actually constructed in the 1980s, although the site dates back to 1906 when fish canning baron Robert Hume established his fourth hatchery. He built his first hatchery on the Rogue River in 1877. 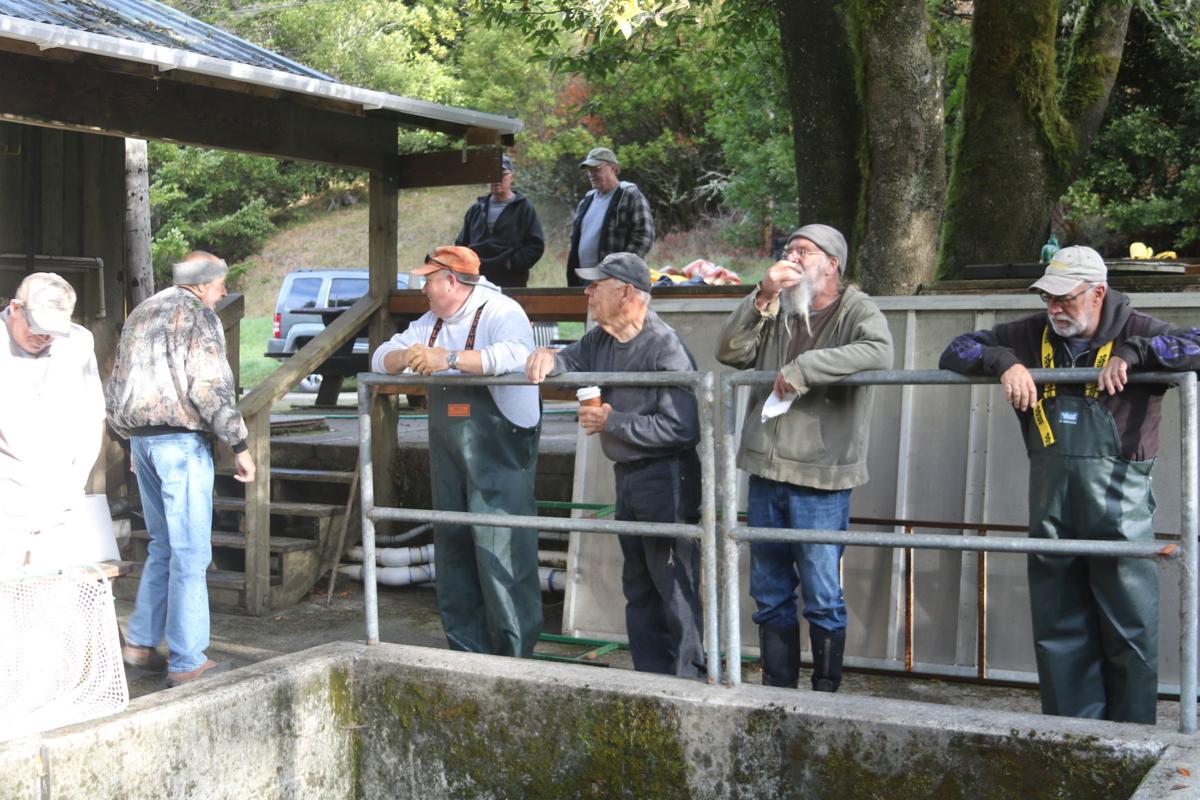 Volunteers and spectators turn out for the first spawning of the season at Indian Creek Hatchery. 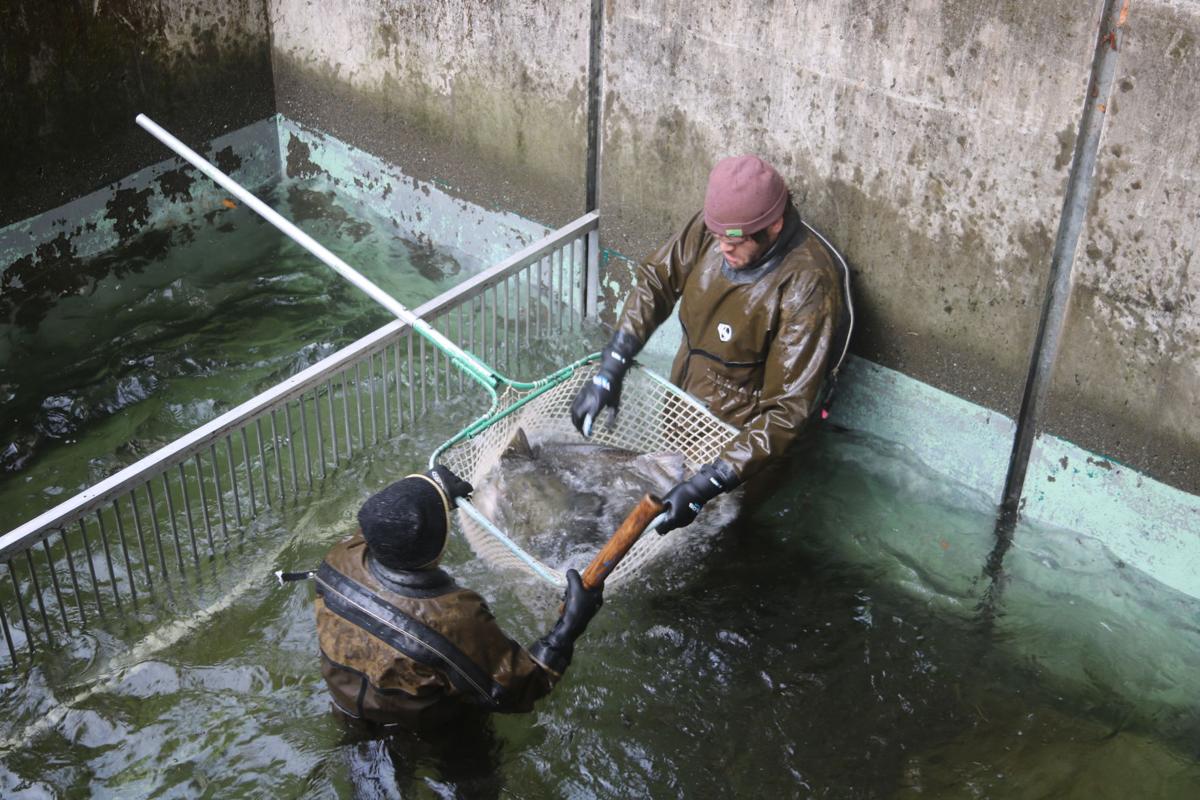 Joan Cooper assists the Oregon Department of Fish and Wildlife’s Andrew Wells as he begins checking the netful of fish for those ready to spawn. 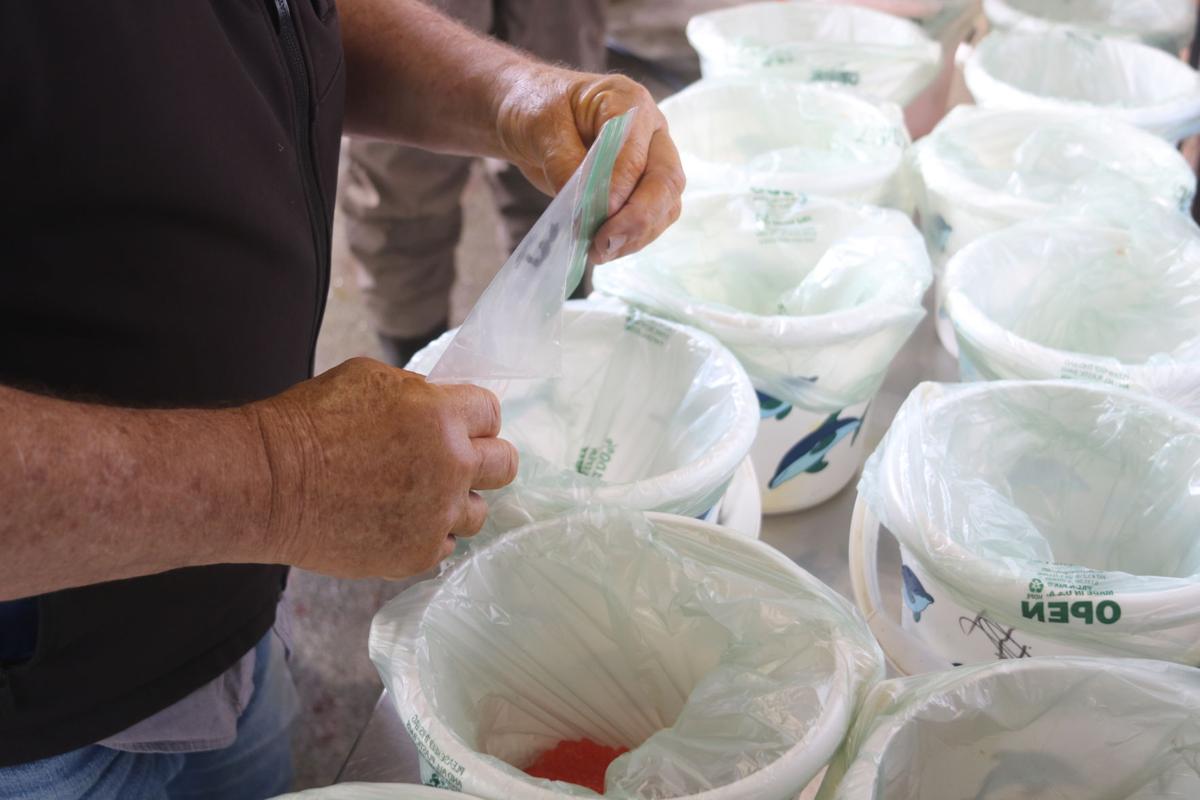 Salmon milt is added to the collected salmon roe in buckets to fertilize them. 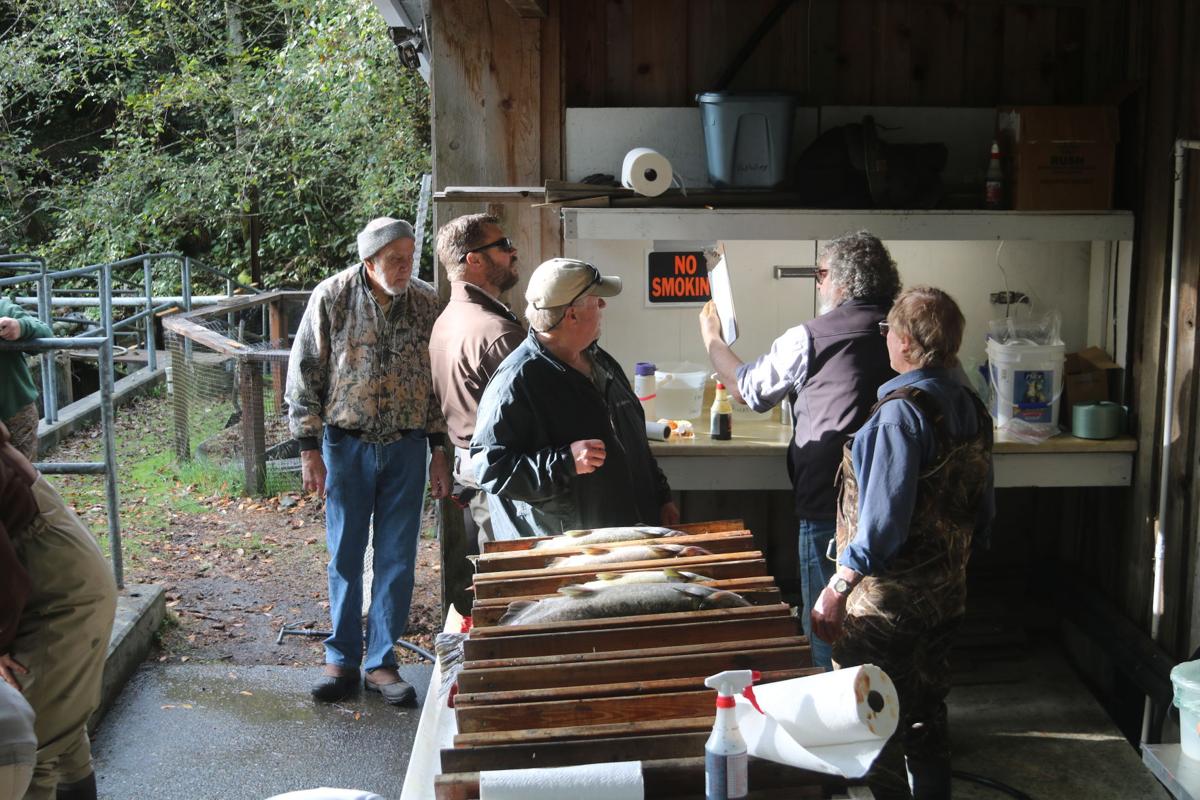 Each volunteer has a specific job. 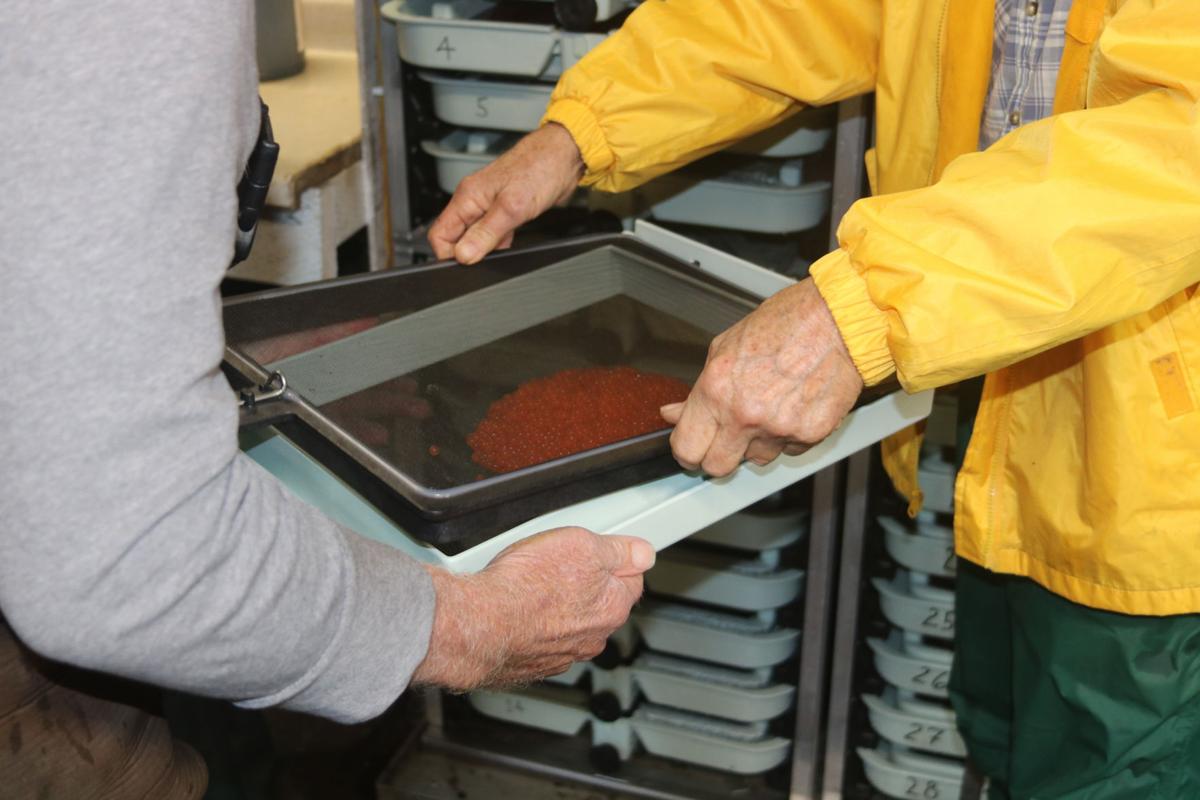 The fertilized eggs are loaded into the incubator. 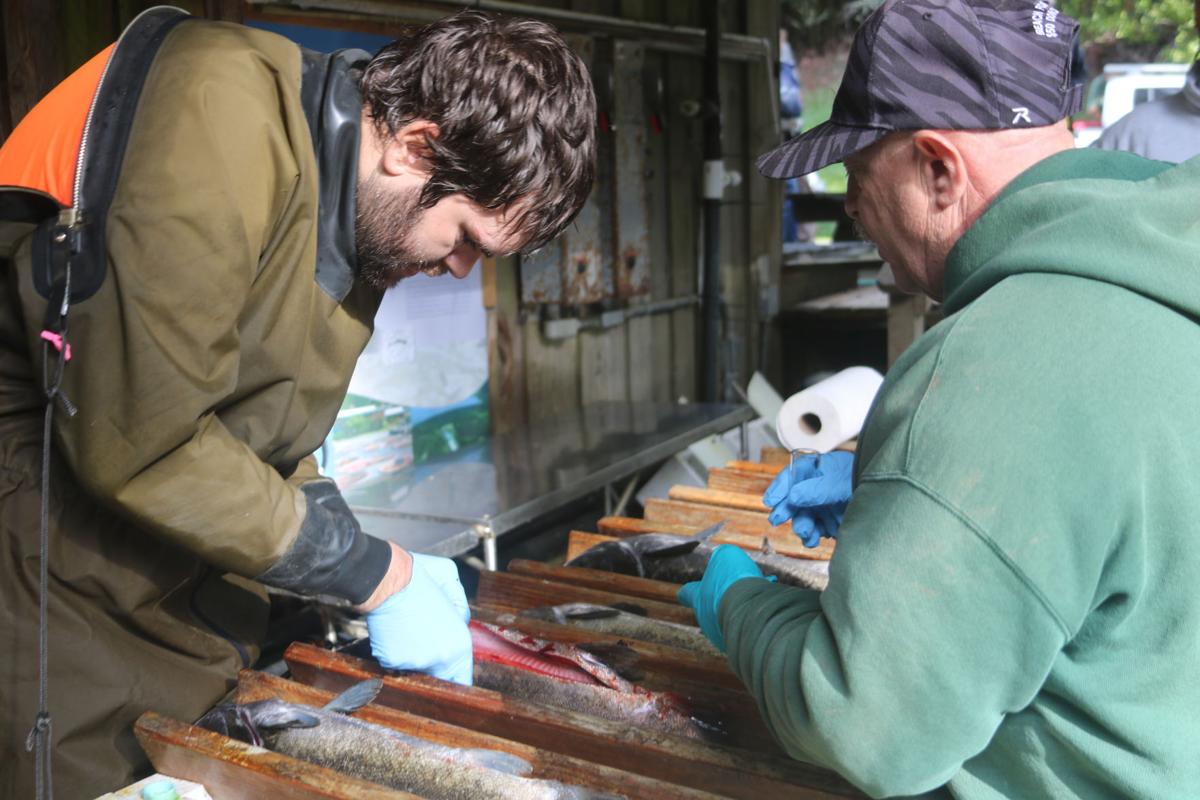 Fish biologist Andrew Wells gathers specimens to check the health of the fish that have been spawned.

More than a dozen volunteers, supporters and Oregon Department of Fish and Wildlife (ODFW) employees were at Indian Creek Hatchery in Gold Beach on Nov. 13 for the season’s first spawning of Rogue River hatchery chinook salmon.

“First spawning (brings out) quite a crew,” said David Sophusson, president of Curry Anadromous Fishermen (CAF). “But after the third or fourth time, we need to recruit more volunteers.”

For this first spawning, CAF, along with ODFW, spawned four female salmon, fertilized their eggs with milt from four males, and placed the spawn into incubator trays. As of Dec. 3, the group had spawned 36 fish, 18 of which were females.

The program is authorized through the Rogue Fall Chinook Management Plan, adopted in 2013 by the Oregon Fish and Wildlife Commission.

The spawning continues weekly, as fish continue to become “ripe,” until sometime in mid to late December.

The goal is to produce 90,000 smolt (fish ready to head out to the ocean) to be released at the mouth of Indian Creek in the Rogue estuary late next August.

ODFW experimental biological aide Andrew Wells climbs into the waist-deep tank containing all of the fish that have been brought into the spawning program this year. With him is 75-year-old Joan Cooper, who is slightly shorter in stature – so, she’s chest-deep in the water.

Joan Cooper is the official “fish whacker” for each fish Wells selects as ready to spawn. “Every year, she says she’s not coming back, but she always does,” Sophusson said. “The water is very cold.”

With each netful of fish, Wells and Cooper are drenched by the fish splashing and thrashing.

“Wild female, over,” Wells yells, as he releases the fish back to the holding pen. A volunteer keeps track of the fish as they’re being sorted. “Hatchery male, over,” as the sorting process for the 101 fish present continues for nearly two hours.

Wells lifts every one of the fish, which average 20 to 40 pounds. That’s a ton or two of salmon!

Seventy-eight of the fish came from seining the Rogue River; the remainder are fish that returned to the hatchery on their own. More Indian Creek fish will arrive with the seasonal rains.

“Today’s usually the longest day, because we have to go through all of the fish to find which ones are most ready,” Sophusson said. “Once the spawning has started, someone has to be out here every day to make sure everything is okay.”

“These guys are dedicated,” said ODFW STEP biologist John Weber. “They inspire me. They all want to give something back.”

The hatchery has an alarm system to notify overseers if the water is getting low. The water is gravity-fed from upstream, but sometimes a problem can occur. If the alarm goes off, one of two pumps automatically starts pumping water from the creek.

Each volunteer has a specific task to perform this day, from lowering the penstock barriers, to squeezing the fish into a tighter area, to lifting selected fish from the tank in a net, bleeding them out, disinfecting the incision areas, pulling the eggs, catching the milt, combining the eggs and milt in a bucket with a gentle swirl of water, then draining and placing the eggs into incubator trays.

Weber explained what happens in coming months: The next day, someone will come out to remove any of the eggs that didn’t get fertilized, but otherwise they’re kept in the dark and not disturbed for 30 to 40 days.

Next, they enter an “eyed” stage, indicating they are fertilized eggs. That’s when they’re counted. Within the following month, they’ll begin hatching and absorbing their yolk.

When it’s time for them to start being fed, the tiny fish are placed in the hatchery’s raceways until they’re ready for release.

Volunteers start by feeding them just ounces a day, which increases to about 30 pounds daily to feed all of them. It takes at least two hours every day for two volunteers to feed and keep the ponds clean, Sophusson said in CAF’s recent quarterly newsletter.

In June, the adipose fins are clipped on all of fish at the hatchery. “When they come back to spawn in three to five years, they are legal to catch and keep during the salmon fishing season,” Sophusson said.

“We also put coded wire nose tags in the snouts of the first 30,000 fish to identify and track them for research purposes.”

After the volunteers finish their work, ODFW fish biologists and managers meticulously gather and log specimens from organs and flesh, to check the health of the fish taken for the program this day. The carcasses are gathered, to be placed back into streams to provide nutrients to native fry - as would happen in the wild.

Indian Creek Fish Hatchery, established in 1877 by Robert Deniston Hume, may be the oldest such hatchery in Oregon. It’s distinguished by its private ownership, as opposed to the federal hatcheries.

Hume owned and operated a huge salmon cannery on the Rogue River near Mill Rock, on the south bank of the Rogue River, in the vicinity of where present-day Patterson Bridge on U.S. Highway 101 is located at Gold Beach.

“Hume was a pioneer in hatchery production to supplement the natural runs of salmon,” according to the Curry Anadromous Fishermen webpage. “In 1907, he had about 1,400,000 fry in his hatchery pens.”

The present hatchery on Indian Creek was the final of four, built by Hume in 1906. He operated the hatchery until 1926, when the State of Oregon took it over.

The state closed the hatchery in the mid-1930s, about the same time state law halted commercial fishing on the Rogue River, in 1935.

In 1958, the Salmon Unlimited group organized to improve salmon production on the lower Rogue, helped by the Oregon Game Department. The fall chinook they captured produced eggs that were hatched in the Bandon hatchery. The fingerlings were reared at Libby Pond and at the Knox family’s Indian Creek property.

In the 1970s, several groups were rehabilitating salmon runs by using “hatch boxes” in tributaries, which is where the Salmon and Trout Enhancement Program (STEP) was born. The local group affiliated themselves with the Northwest Steelheaders in Woodland, Washington, allowing them to gain organizational status and state funding.

The group worked on habitat improvement and on creating mini-hatcheries on several tributary streams, including Euchre Creek, the Rogue River, Hunter Creek and the Pistol River. Those hatcheries eventually were discontinued as salmon populations began to rebound.

In the 1980s, the Knox family created several hatch boxes on Indian Creek and built a hatchery building next to an earthen pond. They raised 200,000 “eyed” (fertilized) eggs from Cole River Hatchery in their hatchery and ponds.

The Northwest Steelheaders became Curry Anadromous Fishermen in 1985, so membership dues could remain in this area.

In 1987, more than 2,500 adult salmon returned to Indian Creek, in what was deemed the highest rate of return in the state.

Scott Knox’s hatchery had become a full-time job … and the hatchery needed work. Which is when CAF took over its operations. CAF volunteers continue to operate the hatchery more than 30 years later.

To learn more about CAF and how to volunteer, visit http://www.rogueriversalmon.org.