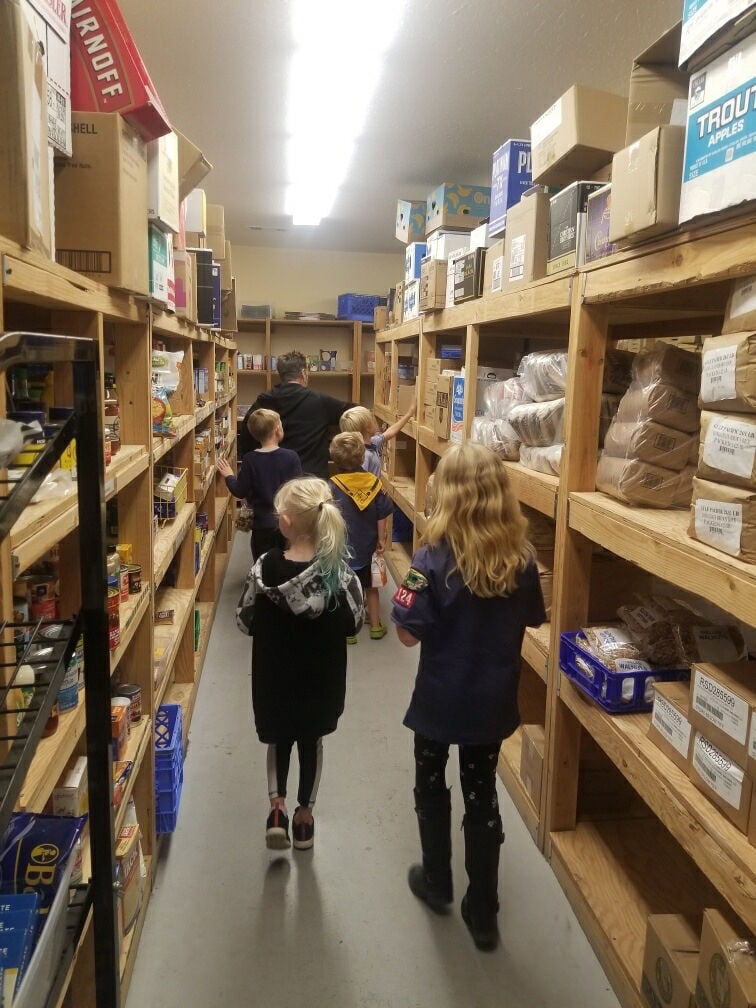 The den members went ‘shopping’ at the food bank in a role-playing scenario where they learned about homeless and hungry members of their community. 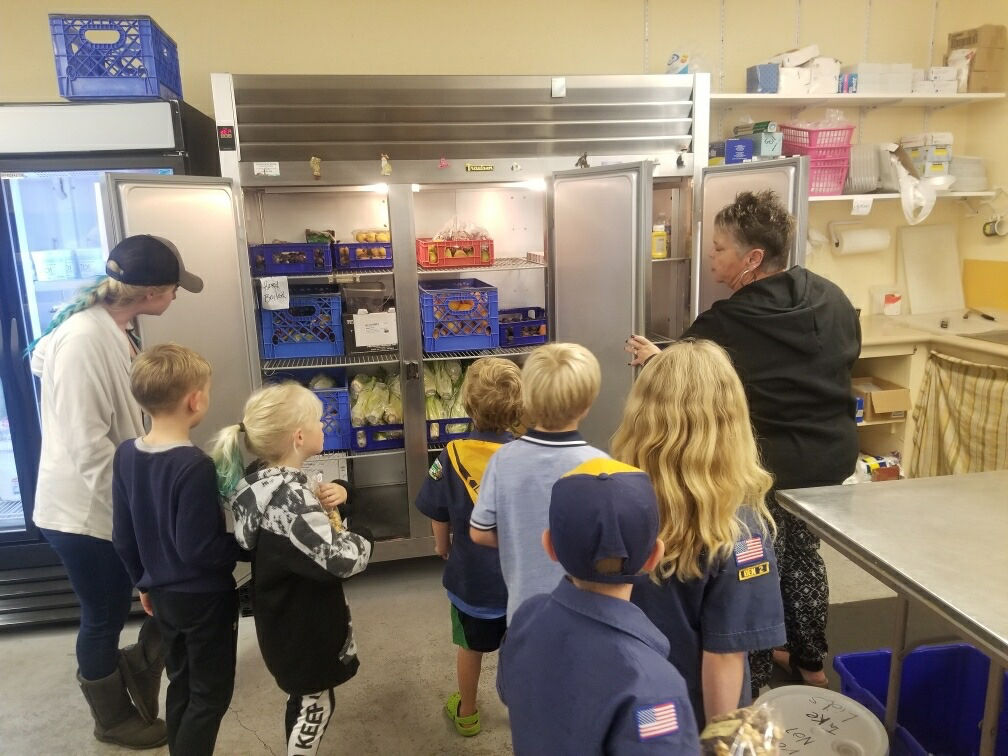 Pamela Winebarger, director of the food bank, shows the fresh fruits and vegetables they store. 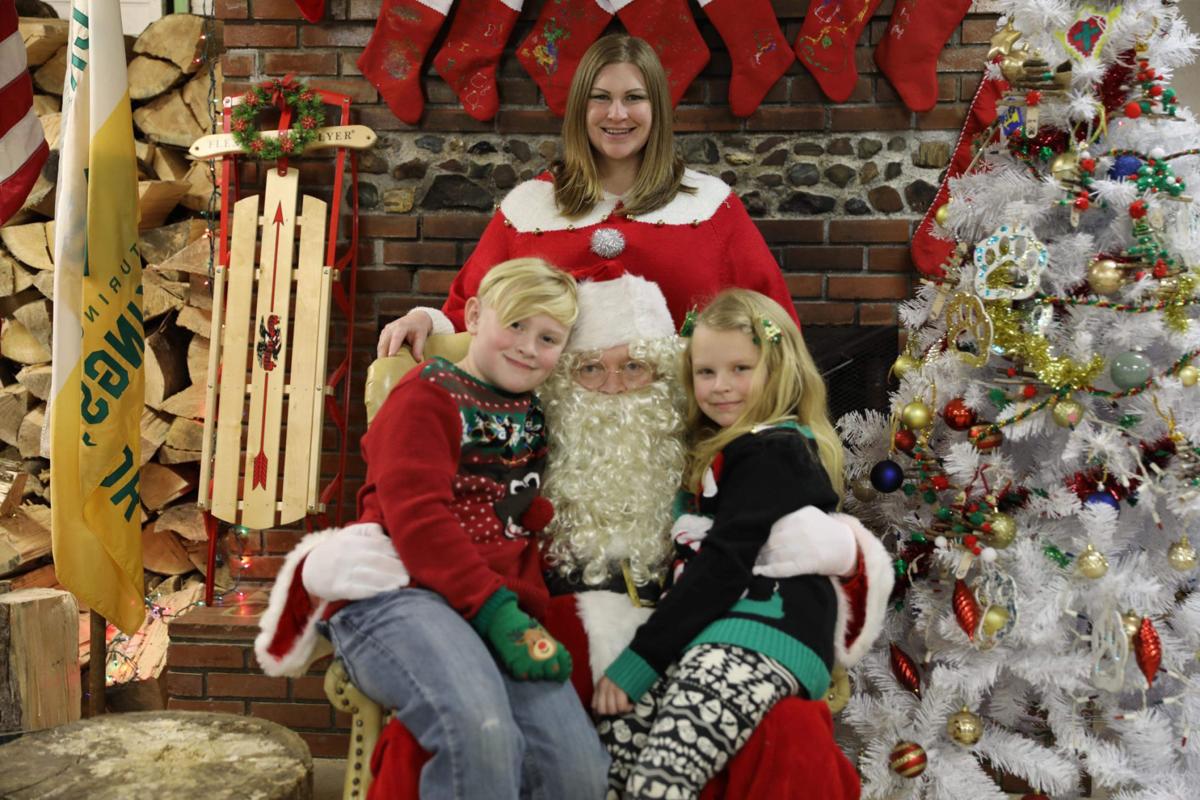 The Hamilton family took a picture with Santa — Liam, Mike and Eden Hamilton (front left to right) and Taira Hamilton (back).

The Hamilton family took a picture with Santa — Liam, Mike and Eden Hamilton (front left to right) and Taira Hamilton (back).

Brookings Cub Scout Pack 124 presented a $400 check to the Brookings Harbor Food Bank on Jan. 7. They earned the money through a photos-with-Santa fundraiser held Dec. 14. They also held a bake sale, with $250 from that going to the scouts.

The cub scout pack members range from kindergarten through fifth-graders, and includes both boys and girls.

The idea for the fundraiser came after the Wolf den visited the food bank. The Wolves are first- and second-graders. When they toured the food bank, they got to learn about how to serve the community and the homeless as one of their badge requirements, said den co-leader Taira Hamilton. Paul Slosser is the other leader of the Wolf den.

Pamela Winebarger, executive director, allowed the den to come in and tour the food bank when it was closed.

“They did some role-playing and pretended they were in that situation,” Hamilton said. “She checked them in like they were homeless and needed help with food, or they were just a family that needed help. Then we went ‘shopping.’

“That was quite an experience because she got to explain to us how everything worked,” Hamilton said.

They learned that over the summer, the food bank served more than 3,000 children in the community with 250 snack packs delivered each week over 12 weeks. Winebarger said they partner with the Brookings-Harbor High School’s food program, which expanded their reach. The high school has a bus that goes out into the community, with four different stops in Brookings and Harbor to bring the food to where the kids are, instead of them having to make their way to either the high school or the food bank. The addition of the bus increased the number of children this past year by 1,000 compared to the previous year’s 2,000 children.

“The kids in our group were like ‘Those are my friends? You mean the friends in my class had to come here? Wow, the people in my class, they’re hungry?’ What hit my daughter Eden was that could be some of the kids’ meals over the entire weekend — a couple of granola bars and this and that,” Hamilton said, “because the only food they get is what the school gives them.”

“The food bank has some very large refrigeration units, and try to do as much fresh food as they can. As much as they like canned donations and all the nonperishables, they do have a lot of donations that are perishable and try to get as much of that as they can,” she said. “The electric bill gets quite expensive. To keep them open, they need to pay that electric bill.”

The electric bill fluctuates between $400-$500 each month, depending on the month, according to Winebarger.

One of the other requirements for the cub scouts is to do a money-raising service project for the community. The cub scouts set the goal of trying to at least pay one of the electric bills for them. That’s when they came up with the idea to do photos with Santa.

The kids did everything, Hamilton said. They cleaned Scout Hall. They made all of the ornaments on the tree. They decorated everything themselves. They even scrubbed toilets in the bathrooms.

The photographer was Stacy Skaggs, who donated all of her time.

“She didn’t charge us a cent, which really helped,” Hamilton said. “The generosity from the community and all the parents’ help, I was just overwhelmed and blown away by it. It has really become family scouting.

“The kids did the work cheerfully. I think the kids understanding what it was for was a big deal. Pam having the children in really ignited this fire.”