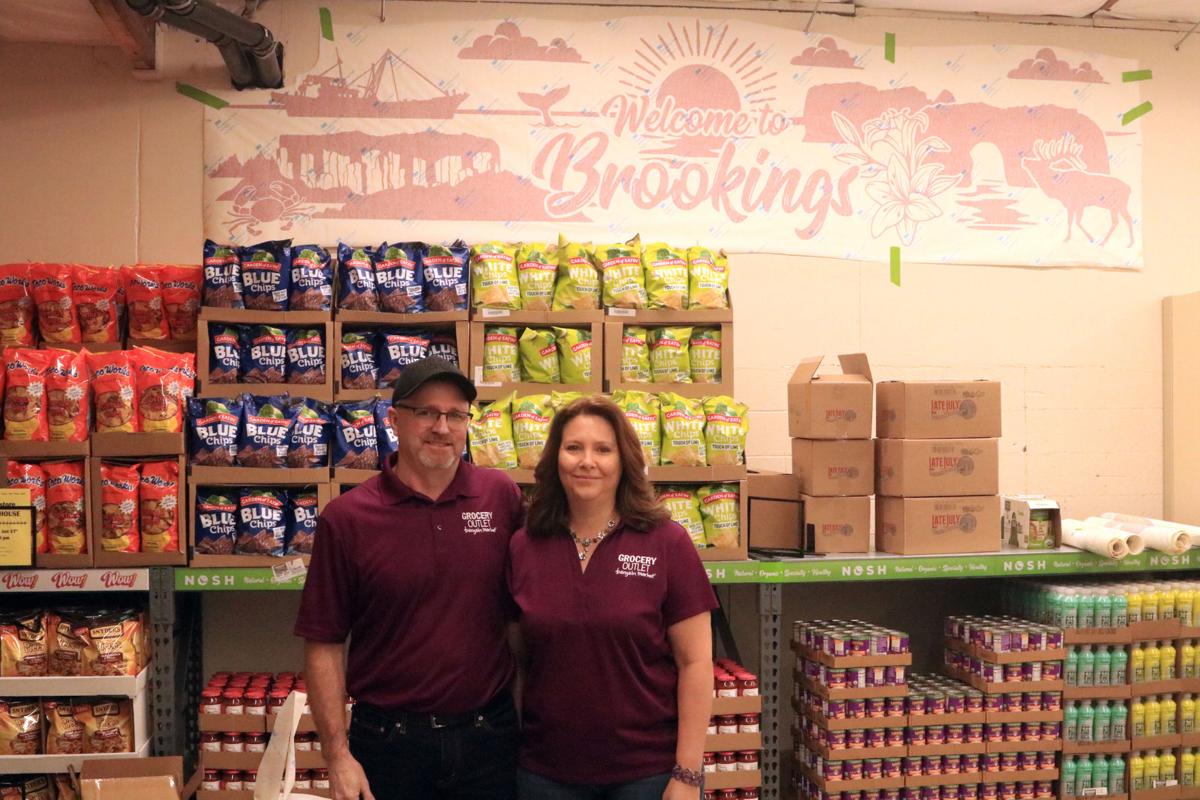 Hal and Lori Panter were still unpacking boxes at their new Grocery Outlet location. The mural layout above their heads should be finished by Jan. 30 when the store reopens. 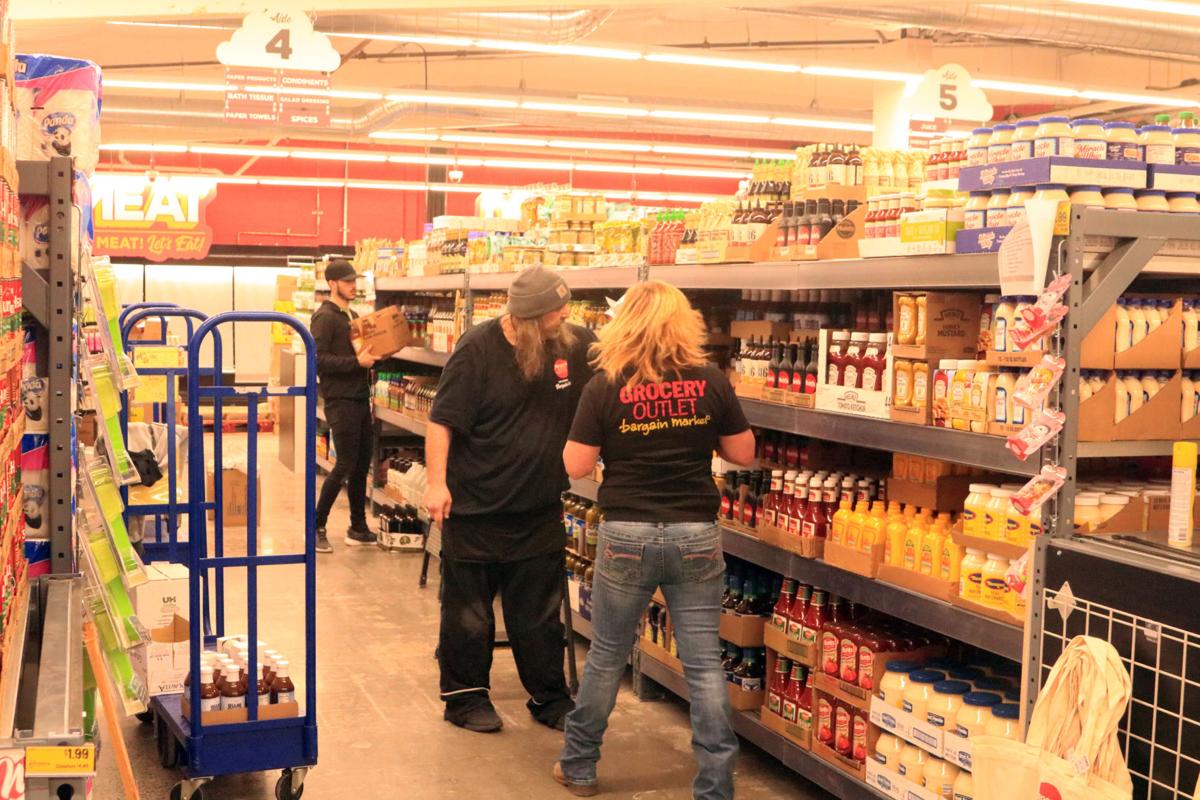 Employees have been working nonstop for more than two weeks to get everything set up onto the new 4-tier shelving. 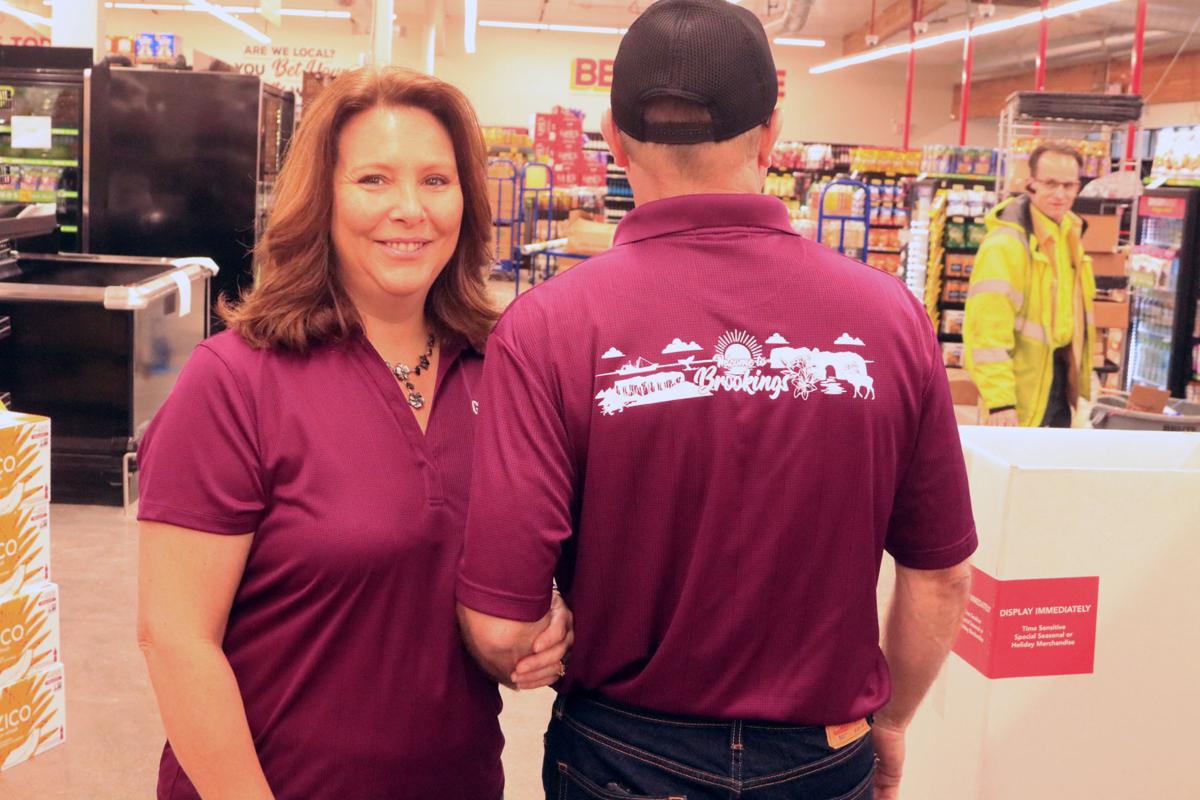 Work is almost complete for Grocery Outlet’s move from Harbor to Brookings into the old Ray’s Food Store at 906 Chetco Avenue. Owners Hal and Lori Panter gave The Pilot a tour of the new store last week, answered our questions and described the changes customers will see on Jan. 30 when the new location opens its doors.

The grand opening festivities start at 8 a.m. with free reusable bags for the first 200 customers in line. Free coffee and donuts will be available until noon, with a live DJ. At 9 a.m. an opening ceremony and ribbon cutting will officially open the store. Free wine tastings are from 1 p.m. to 3 p.m. The store will hold a series of prize drawings over the next three weeks for a 55-inch TV and surround sound system, a pair of Mongoose fat tire mountain bikes and a tandem kayak.

The store’s new decor will feature a custom-made mural that highlights sights from around Brookings, with azaleas, Natural Bridge, elk, whales, crabs, fishing boats, and more. The mural complements the new signage throughout that gives shoppers immediate direction to find produce, meats, deli, dairy and more.

The mural design is also on the back of the new uniform shirts, which the Panters were wearing this day. Employees are excited about the new store, and when they saw the new shirts, wanted to know when they would get their new polo-style shirts.

Many of the employees have spent the last couple of weeks moving items from the old store and stocking the shelves at the new store. “Our employees have been separated between the two stores,” Hal said. “They put in so much work and so much effort without any complaining. They just do it.”

One of the bigger questions around the community is “Why did Grocery Outlet decide to move?”

“We had a lot of issues with that building over there,” Hal said. “When they built that building, the equipment was already 20 years old. They kind of used a lot of old equipment. Now we’ve been there for 15 years, so some of that equipment is going on 25 to 35 years old.” The Harbor location used to be Price N Pride, basically McKay’s, according to Lori Panter.

“It was going to be a big undertaking to revamp that store,” Hal said. “So they had to make a decision whether to make investments into that or take the opportunity to build a new store. They felt if they built a new store, it could be here for 30 years. So the decision was made to make the investment and build a new store with all brand new equipment. There’s no used equipment in here — everything’s brand new.”

When a location right in the center of town came available at 5th Street and Highway 101, Grocery Outlet decided that would be a better location that fits their new location strategies over the last 5 to 10 years, Hal said. “They used to find places around the corner, cheap rent places. They’ve turned the corner now that they want to be more ‘main-to-main.’”

Grocery Outlet is a growing company. “They went from a hundred stores from when we started (2005) to over 350 stores on the West Coast,” Hal said. As the company has grown, it has allowed them to bring on new suppliers, so the offerings at the store continue to grow, with more organics and natural foods in the nosh section. Nosh stands for natural, organic, specialty and healthy.

The new store will have expanded produce, meat, beer and wine, and nosh sections, according to Hal. “Some of the categories that have shrunk to make that happen are in the nonfood area, health and beauty,” he said.

“It’s really just the general trend of the country,” Lori said. “People are eating more fresh, more produce. They’re cooking more and thinking about what they are eating. We want to expand those areas for the customers.”

The store’s new shelving allows more items to fit into the aisles. Instead of 2-tier racking, the store will have 3- and 4-tier racking. The additional tiers allow the store to display twice as many items in the same space. “The whole thing is the newer look of Grocery Outlet,” Hal said.

The store aisles appear wider, but the Panters both say they are the same width. The difference is that with the new shelving, they won’t have as many floor stacks in the aisles. They have also added an additional checkout stand, with six available now.

The produce section at the back of the store will have a new 12-foot section for just salad mixes, added to the existing 24-foot section, which will have additional produce. The meat department has expanded from a 12-foot case to a 16-foot case.

All of the products in the store are purchased by Grocery Outlet corporate, but the individual owners and operators of the stores do their own ordering from the warehouse. “We choose what to carry in the stores and how to display it,” Lori said.

Overall, the store looks very different. “We’re still Grocery Outlet,” Lori said. “We are still who we are, although the colors have changed. It’s just a fresher, newer store.”

Grocery Outlet opened its new location this morning, Jan. 30 at 9 a.m. The new store is located at 906 Chetco Avenue.