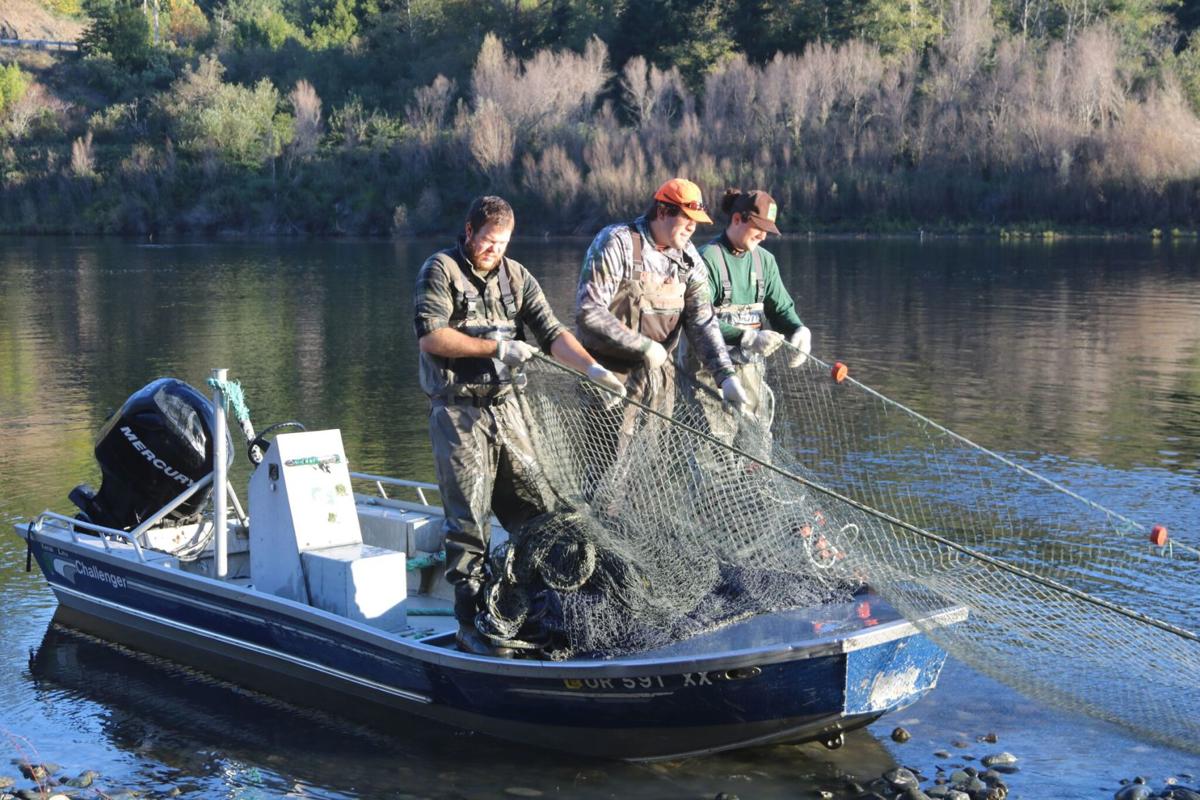 A heavy net is loaded back onto a boat in preparation for another round of 15 on the Rogue River. 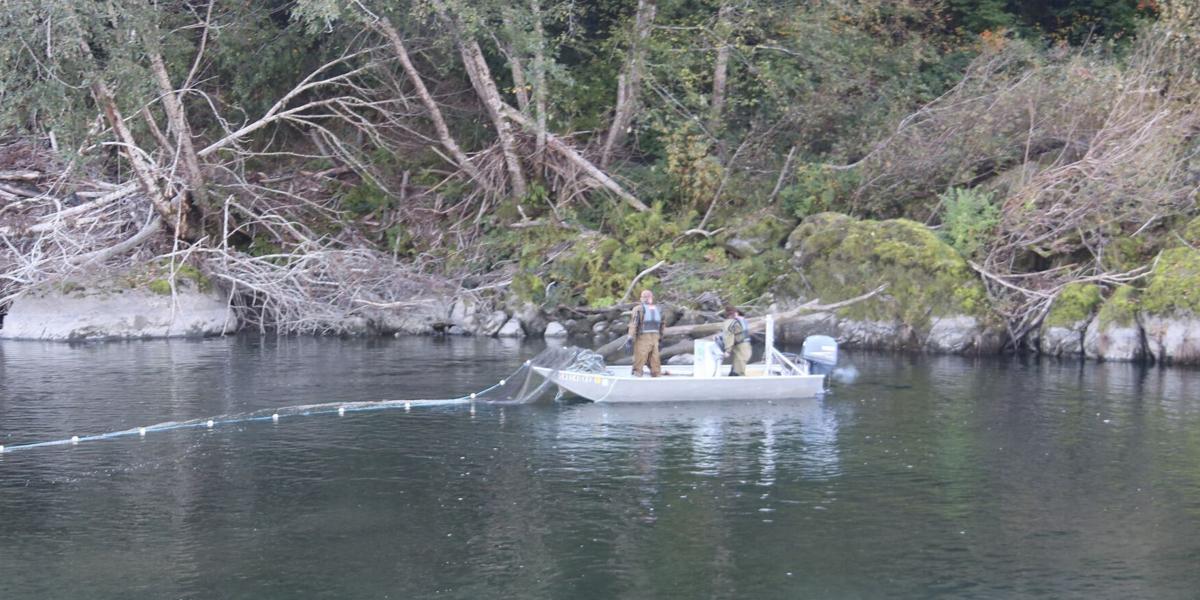 An Oregon Department of Fish and Wildlife boat crew sets a net on the Chetco River. 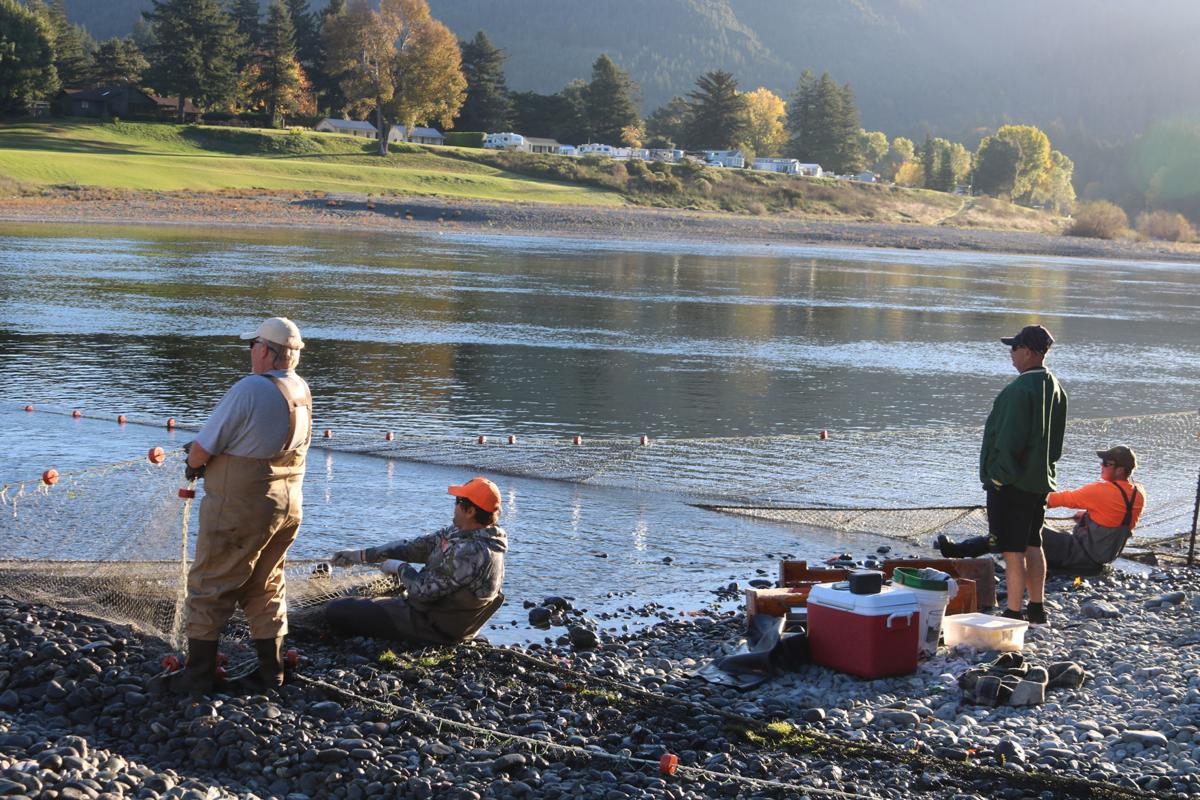 Hand-over-hand, the net is hauled in to reveal the catch in a seine of the Rogue River at Huntley Park. 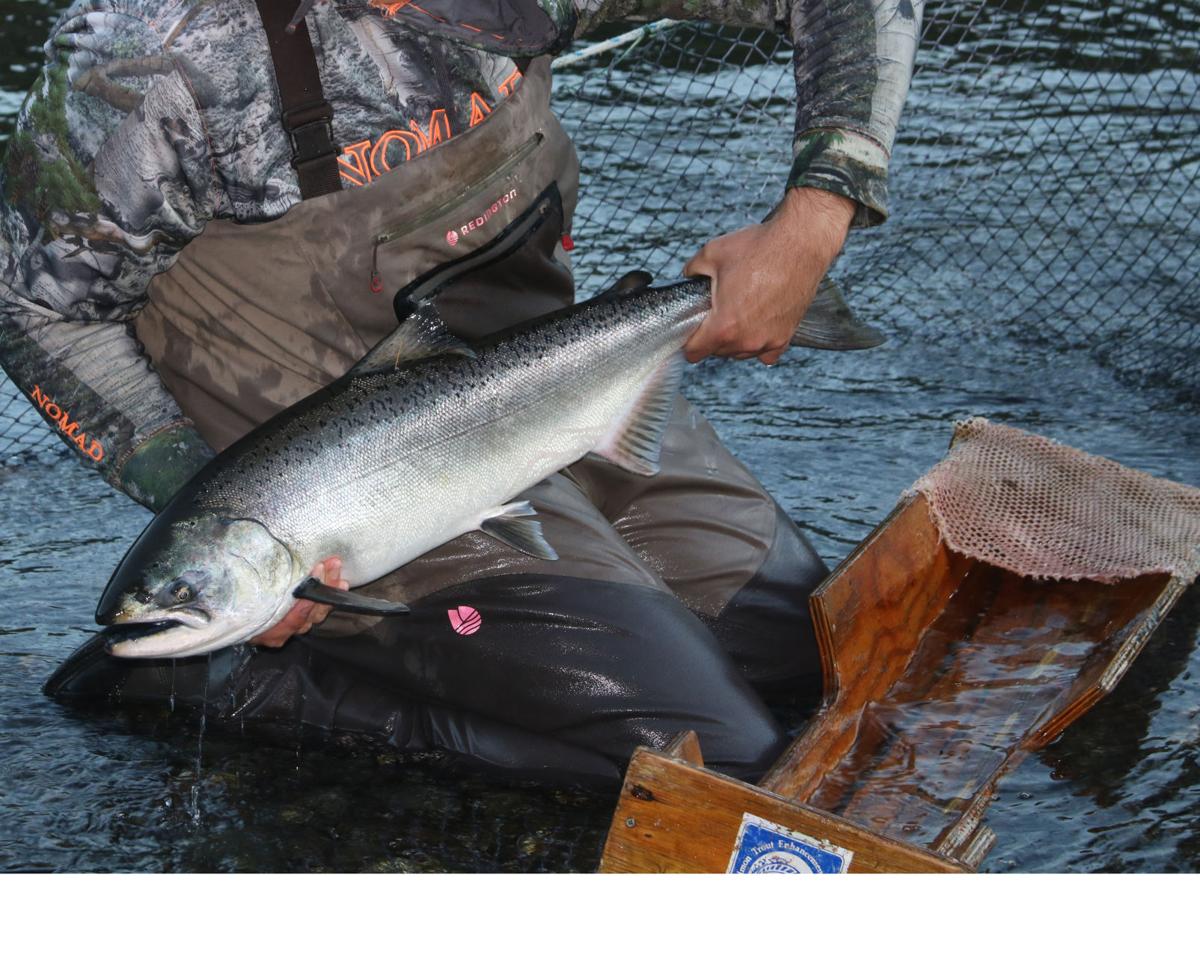 This gorgeous female native Chinook salmon was taken from the Rogue River to Indian Creek Hatchery to add her superior genetics to the next generation of hatchery spawn.

A heavy net is loaded back onto a boat in preparation for another round of 15 on the Rogue River.

An Oregon Department of Fish and Wildlife boat crew sets a net on the Chetco River.

Hand-over-hand, the net is hauled in to reveal the catch in a seine of the Rogue River at Huntley Park.

This gorgeous female native Chinook salmon was taken from the Rogue River to Indian Creek Hatchery to add her superior genetics to the next generation of hatchery spawn.

On a crisp fall morning, in the not-quite-light of pre-dawn, men in waders gathered to seine for fish at Huntley Park on the Rogue River, about 7 miles up Jerrys Flat Road out of Gold Beach.

Several of the men are from the Oregon Department of Fish and Wildlife (ODFW). Their companions are are a hardy group of volunteers, fishermen who belong to Curry Anadromous Fishermen.

They’re there to count fish … yet again.

They count the fish three times a week from mid-July through the end of October, as they have been doing since 1974, said Curry Anadromous Fishermen volunteer Roger Lindquist of Gold Beach. “They have a pretty good data set,” he said.

A pile of netting rests on the front cowling of a small skiff. The net is about 300 feet long and varies from 7 to 18 feet deep, with floats on the top and a thick, lead-core line on the bottom.

The boat backs out slowly into the current and heads upriver, where a line attached to the net is fastened to a piton in a mammoth rock near the top of the pool.

Slowly, the boat makes a big loop up and across the river and then downstream, letting the netting out as the craft circles the fishing hole and heads back to shore. There, a four-wheel-drive truck has backed into the water.

A 40-foot rope attached to the net is fastened to the truck’s tow hitch, and the truck races forward to tighten the net quickly. The volunteers grab that side of the net and remove the rope from the hitch.

The truck then backs up to the rock where the other end is tied off with another length of rope, and again races forward with the net attached to the tow ball, tightening the other side and closing the loop.

Then comes the physical labor of hauling in the net with hand-over-hand “humanpower” - without letting any of the fish escape. The net itself weighs about 300 pounds, wet (even more, with fish in it).

As the circle of the net is tightened, a fish can be seen darting and splashing across the surface. It’s a coho salmon - a federally protected species - so it’s gently lifted over the side of the net and released.

“In August, we had 80 fish in the net, including half-pounders,” said ODFW lower Rogue seining crew leader Andrew Wells. “The largest set I’ve personally seen was around 200 fish: 50 Chinook and a bunch of half-pounders.”

The men straighten out the netting and begin to fold it back onto the cowling of the boat, shaking out any sticks and rocks and preparing to seine the hole again.

The next net of fish this day yielded two coho and a big Chinook salmon. “Oh, she got me right in the knee,” said one of the ODFW crew. “I didn’t see anything and all of a sudden she smacked me.”

“A mini-rodeo,” a volunteer said, as the fish thrashed and splashed.

“I’m sick and tired of you slapping water in my face,” Wells said, as they measured and tagged the fish. Then she was loaded into a rubber sleeve, called a boot, and placed into a waiting, specialized fish transport truck.

She would become No. 42 of the salmon that have made the journey this year to Indian Creek Hatchery, which raises about 90,000 fish annually to be released at the mouth of Indian Creek in the Rogue River estuary.

The men gathered the net once again, loaded it onto the boat and repeated the process. They would do so 15 times this day, the same as all the other days this season and over the years dating back to 1977 - when they first standardized the process for how many pulls and the time of day they do them.

“We were seeing a pattern where the fish were moving more in the morning,” Wells said. “We start right at ‘legal daylight,’ start setting the net, and we do 15 sets. Work until we’re done, work up all the fish we’ve looked at. Coho, adult summer steelhead, half-pound summer steelhead, and fall Chinook salmon, as they make their migration upriver.

“The project is cemented in the Rogue Fall Chinook Management Plan adopted in 2013 by the Oregon Fish and Wildlife Commission,” Wells said. “The numbers that are generated every day get posted on the website.

“Every week, we do an expansion to basically estimate how many total fish in the four species we track. We are only out there for two to three minutes, and can only capture so many before we have to bring the net in.”

The numbers are plugged into a calculus formula, with brackets that account for flow, and the crew estimates the escapement of these specific freshwater fish that are going upriver. Monitoring them informs a variety of management decisions from year to year, Wells said.

While the numbers this year aren’t as good as last year for Chinook salmon, at roughly just over half, Wells says they are starting to see the 10-year average go up. “A couple of factors may be playing at that. Ocean conditions and dam removal in the main stem of the Rogue River could be influencing that. But we don’t really know until we get a little bit more data,” he said.

Meantime, the Chetco River was seined Oct. 29 at Social Security Bar for the purpose of capturing brood stock to travel to the Elk River Hatchery. A group of around 40 people, including Tim Buehler’s science class at Brookings-Harbor High School, showed up either to help or to watch.

Everyone wanted to see what fish the seining would find. Unfortunately, the fish had other plans that day, with only a handful of jack salmon and a cutthroat trout appearing.

While jack salmon do spawn, they were not needed for brood stock. So, no fish caught a ride to the hatchery.

Seining the river this year presented some challenges, given a large snag lodged at the top end of the hole. On the second and final run, the net caught on that snag. The ODFW’s Wells waded and then swam out to free the net.

Although the agency’s workers had come prepared, wearing dry-suit types of waders, it still looked almost like a polar swim in the chilly morning air.

While the numbers this year aren’t as good as last year for Chinook salmon, at roughly just over half, Wells says they are starting to see the 10-year average go up.

Do you primarily use streaming services when watching television?

How to review the state of the county