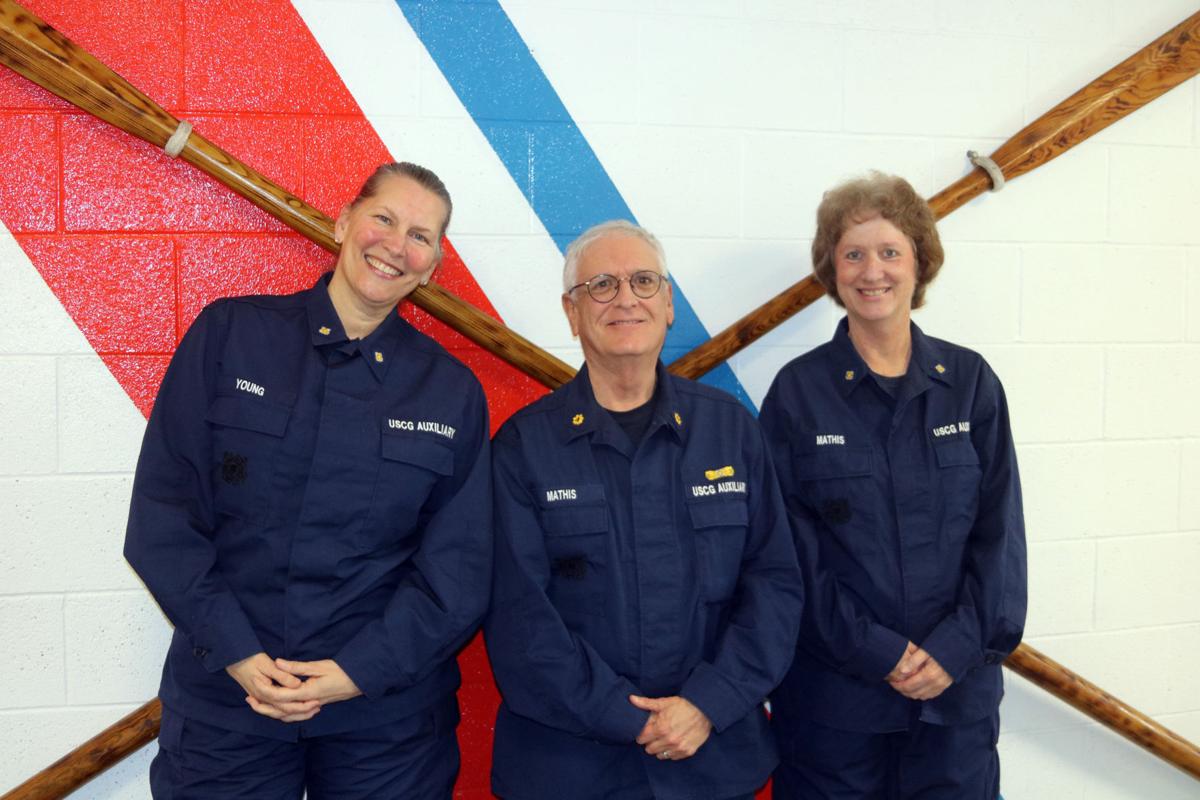 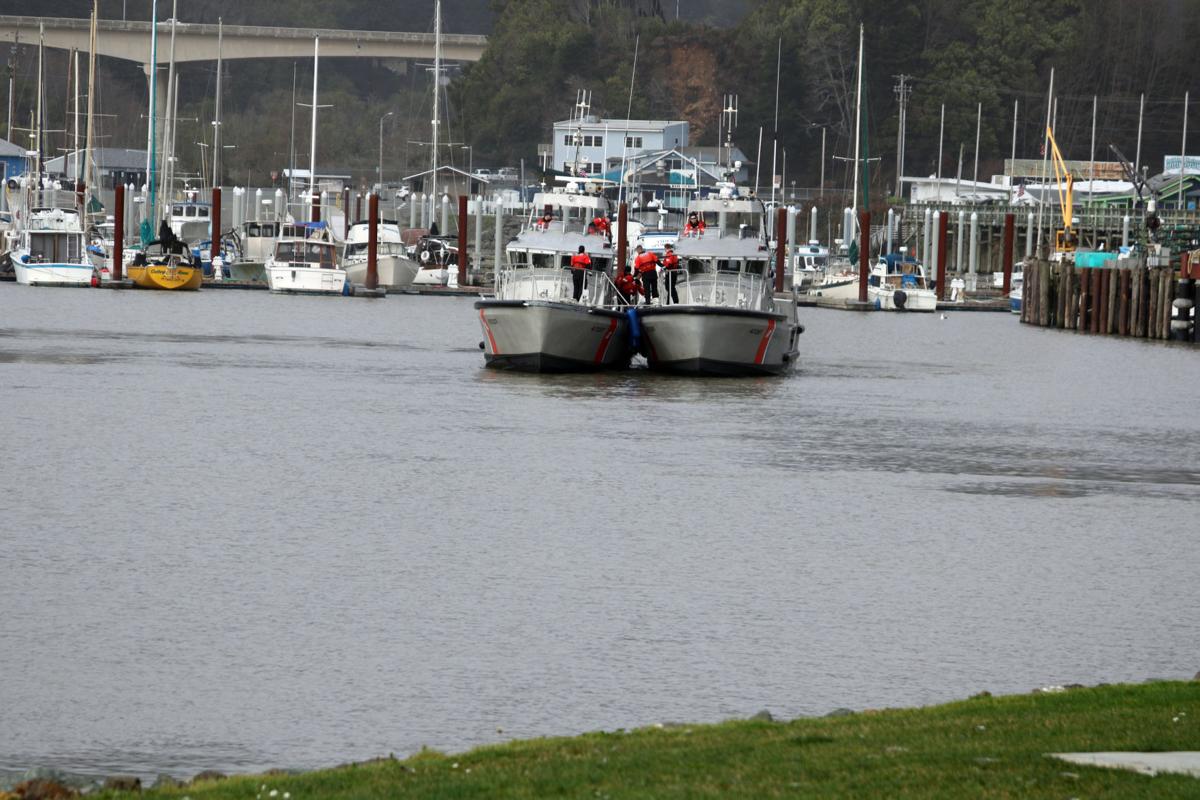 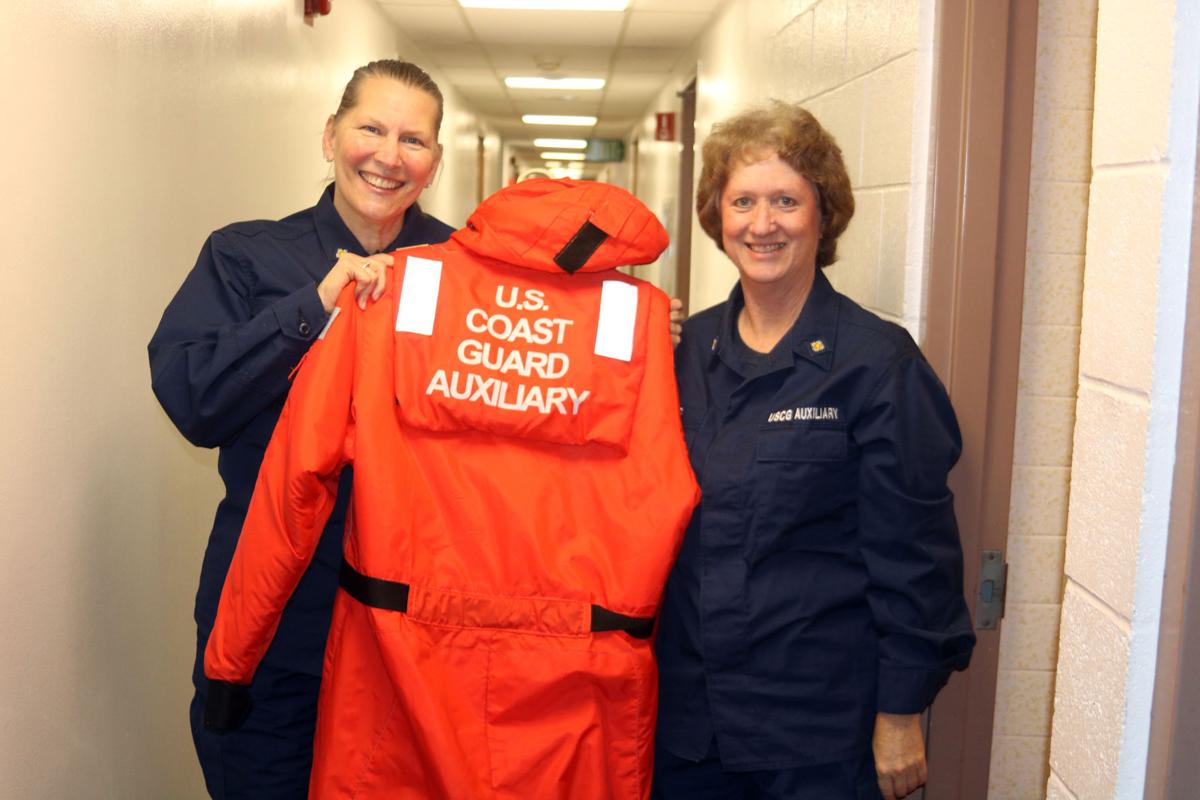 Misty Young (left) and Sue Mathis show the survival suits they wear whenever they are out on the boat. 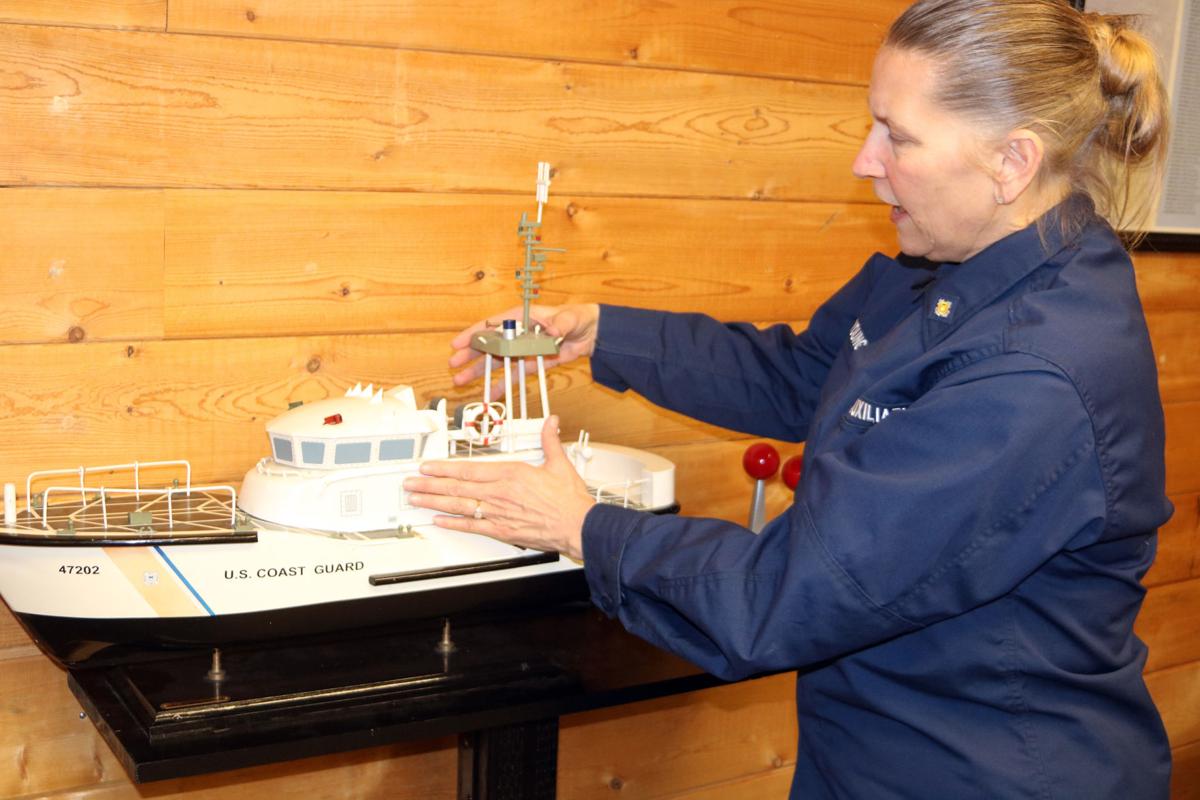 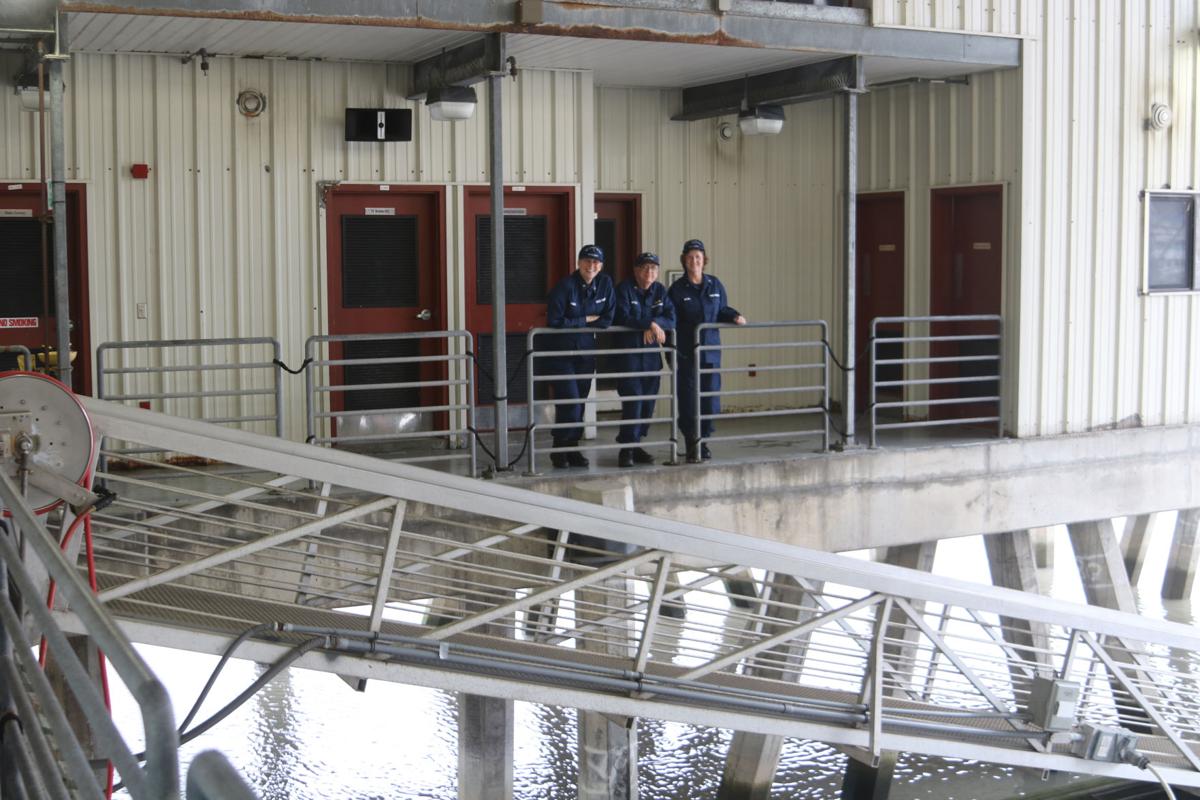 Misty Young (left to right), Steve Mathis and Sue Mathis are overlooking the Coast Guard berth in the boat house at the station.

U.S. Coast Guard members are hailed as heroes in local coastal communities. You’ve seen the stories in the news. They rescue crews from fishing boats and search for people who’ve fallen overboard. Helicopters fly in to rescue people stuck on cliffs, and those “Coasties” will even jump out of a helicopter to rescue someone in the water. But at the Port of Brookings Harbor, another group is stationed with them with the mission to quietly support their activities in every way that they can.

When you hear about the Coast Guard Auxiliary, you probably don’t know who these people are or what they do. To find out more, the Pilot tracked down several of the local Coast Guard Auxiliary volunteers: Sue Mathis, Flotilla 56 Commander; Steve Mathis, Division 5 Vice Commander of District 13; and Misty Young, public affairs. They met us outside the locked gates to the Brookings Harbor Coast Guard base. After entering the grounds, we proceeded to the main building, also locked, and signed in.

The Auxiliarists are in uniform, just like the facility’s newest Coast Guard trainee, who greeted us at the front door. The role of these volunteers, who live full-time in our community, is to support the Coast Guard in two areas. Their main focus, says Sue Mathis, is to provide education and outreach for recreational boating safety. They also provide support to active-duty shipmates serving in the U.S. Coast Guard. Approximately 40 active-duty U.S. Coast Guard members are stationed in Brookings.

The Mathis’ became involved with the Auxiliary after retiring to Brookings. According to Sue Mathis, Steve wanted to get an airplane, but decided on a boat instead because of the fog. Because he had never owned a boat before, he contacted the Auxiliary to learn how to operate it safely, and then soon became volunteers themselves.

“One of the main functions that we do is free vessel safety checks,” Sue Mathis said. “It’s a great way for the recreational boaters to allow us to help them boat safely. We have a check list that we go through and there’s no charge. As the Auxiliary, we’re not law enforcement so we don’t impose any fines. We help them make sure that they go out and come back safely.”

“If they are missing things, we let them know,” she said. “If you don’t have this or that and get boarded by the Coast Guard, it will result in a fine. I always tell recreational boaters that you want the old guys to check your boat because we’re not law enforcement.”

Sue Mathis recommends that along with your life jackets, you should also have whistles attached to them. “If you go overboard, you’re going to get tired of yelling, and if it’s on your lifejacket, you have it with you,” she said.

In addition, the Auxiliary will check whether your flares are good, your fire extinguisher works, and your lights and horn are working. “Almost every time a boat is not in compliance, either the flares are expired or the lights aren’t working — 95% of the time,” Sue Mathis said. “One of the biggest misconceptions with recreational boaters is, we’ll say, ‘Do your lights work?’ and they’ll say, ‘What do I need lights for? I’m going in the daylight.’ But there’s fog that can come in very quickly.”

“The lights aren’t for you, but for the other boats (to see you),” Steve Mathis said.

The Auxiliary performs free boat inspections at the Port of Brookings Harbor boat ramps from 10 a.m. to 1 p.m. on Saturdays from Memorial Day to Labor Day.

Sue Mathis says the work of the Auxilarists does show in the numbers. Fewer citations and injuries occur in this region because of their work.

In addition to inspections, the Auxiliary offers two different types of boater safety classes. The first class is recreational boating safety. “It provides you a lot of information, and the class gives you more information than just online, Sue Mathis said. “At the end of your class, you receive your boater safety card. It’s required in the State of Oregon that you have one. Everybody who drives a boat must have one.”

The other class they offer is a GPS and charts class. They show you how to use a GPS. “We have GPSs that each person in the class is able to use, learn how to operate, and how to make sure to record where you are, and set your waypoints so you can find your way back,” Mathis said.

“One of the things that attendees of these classes say is that they enjoy hearing from people that are actually out on the water, and they are hearing their stories,” said Young. “In addition to the classroom learning with the book, they get to hear all the fish stories and examples of recreational boater safety.”

“Our classes are coming up in April and May,” Sue Mathis said. The ’About Boating Safety’ class is scheduled for May 9, and costs $25. Two sections of ‘GPS for Mariners’ classes will be offered on April 18 and 19 and again on May 16 and 17. The class costs $45. Both boater safety classes are taught by local Auxiliarist Phil Range, Dave Kuehn and others.

“One of the things the Auxiliary does is go out with the Coast Guard,” said Steve Mathis, who is a coxswain with the Auxiliary. “We support them in maritime missions. We go out and tow boats in. If it’s a May Day or something, we go out and see what’s going on and see if they need assistance or whatever. We take care of that. We are their liaison, a lot of times, to the Coast Guard itself.”

While the boats the Auxiliary uses are privately owned, they need to meet a lot of requirements to be a Coast Guard Auxiliary facility. “You are a crew on that boat, just like you are a crew on a Coast Guard vessel,” he said. “There’s discipline involved and a tremendous amount of navigation, search and rescue, first aid and other training for operational qualification.” The boats are marked as Auxiliary, and fly the flags and carry the insignia when they are carrying out Coast Guard mission support.

“A coxswain is different and has a lot more responsibilities,” Mathis continued. “He’s got responsibility for the crew and the boat, and if he attaches to another boat, it’s his responsibility for that other boat, as well. So there’s detailed and comprehensive operations protcols — lots of good training, like just going out in rough weather to get confidence in managing a boat.”

When the Coast Guard needs to do training exercises, the Auxiliarists often go out with them to play “dead in the water,” for the crews to practice towing their boat in. They have their uniforms and survival suits on, just as regulated for the Coast Guard themselves.

In addition to Coast Guard surface support, the Auxiliary also conducts burials at sea (cremated remains) for former military or military spouses,” Sue Mathis said. “It’s a great way to honor those who have served our country.”

“In many cases we are a force mulitplier,” Steve Mathis said. “The total population of the Coast Guard is divided into three parts, One is the active Coast Guard, second is the Coast Guard Reserves, and third are us, the Auxiliary. And they take that into consideration, about funding and everything else. We are an integral part of the Coast Guard force itself.”

“We make up about one-third of that (force), so it’s really a much larger number than most people realize,” Sue Mathis said. There are currently 19 Auxiliary members in Flotilla 56.

The Auxiliary also provides classes for its members. “For someone who becomes a member of the Coast Guard Auxiliary, they have the opportunity for a massive amount of training,” Young said. “It’s a huge opportunity as a volunteer to get training for free in a whole bunch of different categories, for example safety exams, public affairs or boat crew.”

“We have a set of core and mandatory training that we all experience,” Young said. “Some of it is things you would think about when working in an organization. This is a federal facility. This is the U.S. Department of Homeland Security, Coast Guard facility. It is a federal base. For us to be able to participate, we have to understand and be able to augment and serve in a way that is meaningful and matches the level of training that the active duty side has had.

“So we have training on sexual harassment, workplace resilience. There’s safety standards, all kinds of stuff that we go through just to become basic core certified. There’s a basic training for Auxiliarists, and beyond the basic training are specialty trainings.” Those specialty courses include leadership courses, marine safety and environmental protection, food service, weather monitoring, incident command system training, helicopter operations training, and more.

“The Auxiliary is not a club,” said Steve Mathis. “It’s not an Elks or Masonic Lodge or fishing club. We are part of the military, and we’re proud to serve.”

“This is for people who want the opportunity to learn new skills, who want to contribute to the community, assist recreational boaters, want to learn coxswain and crew and serve on a boat for training — or maybe even serve in the kitchen,” Sue Mathis said. “We’re looking for people who want to make a difference, serve the community at whatever level they want to. There are lots of opportunities and the training is free.”

If you are inspired and want to serve your community with the Auxiliary, Sue Mathis encourages you to call her or the Coast Guard station and let them know, and she will set up an appointment. Sue Mathis serves as human resources for the Flotilla. After you attend a few meetings to learn more about the program, they will help you submit your application and then get you started on the training needed to serve. Applicants must be at least 17 years old and cannot have a criminal background. Disabilities are not a barrier.

Do you think there should be bans on people staying in hotels and motels during the coronavirus pandemic?

Cities along the coast in Oregon have put bans in place to stop people from coming from other areas and staying in their cities and possibly spreading the coronavirus.

Every Child and Oregon DHS launch My NeighbOR

Food service and volunteers gear up to deliver

Every Child and Oregon DHS launch My NeighbOR