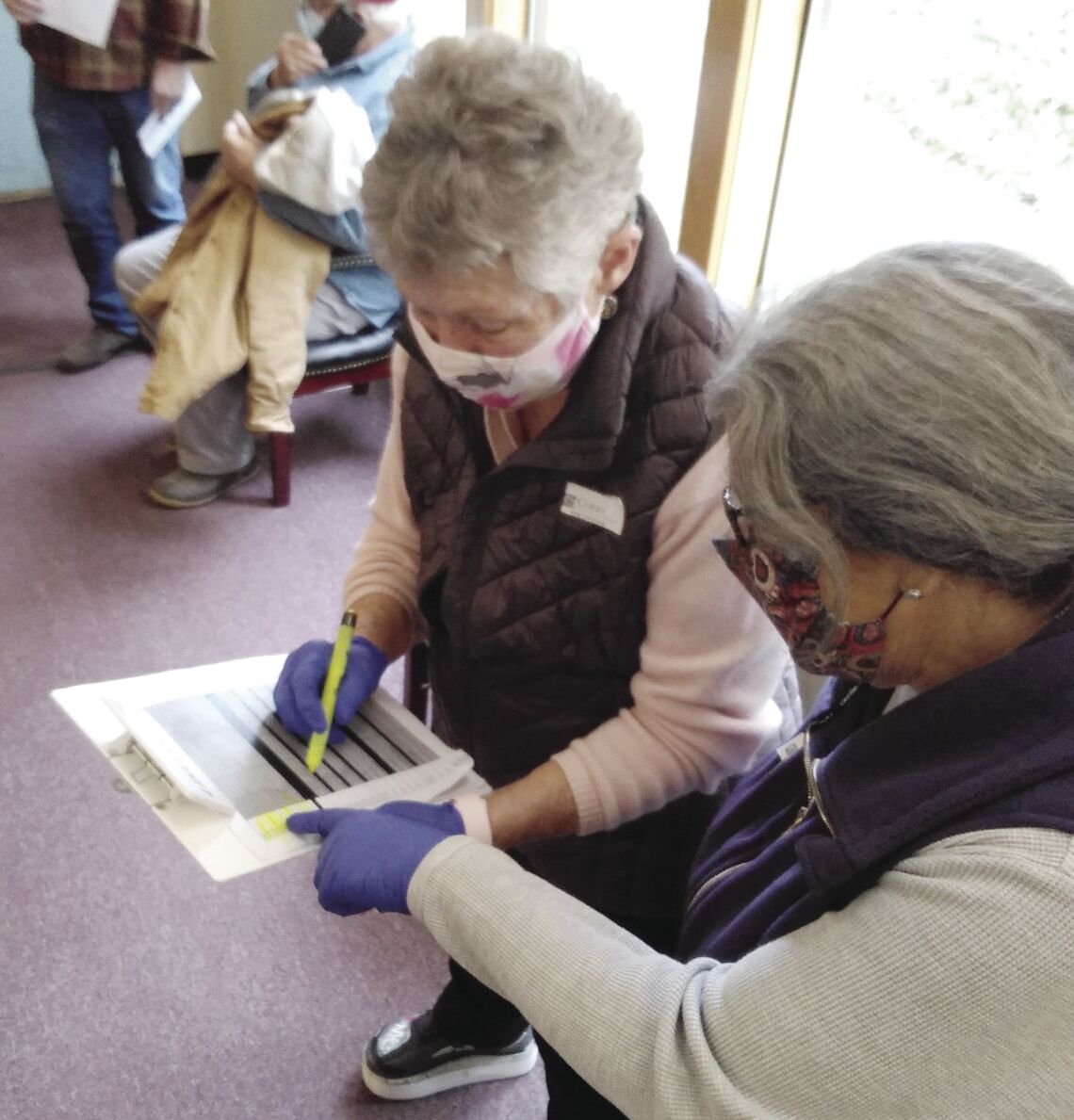 Carol Betush and Eleanor Foskett work to get people signed up for the COVID-19 vaccine. 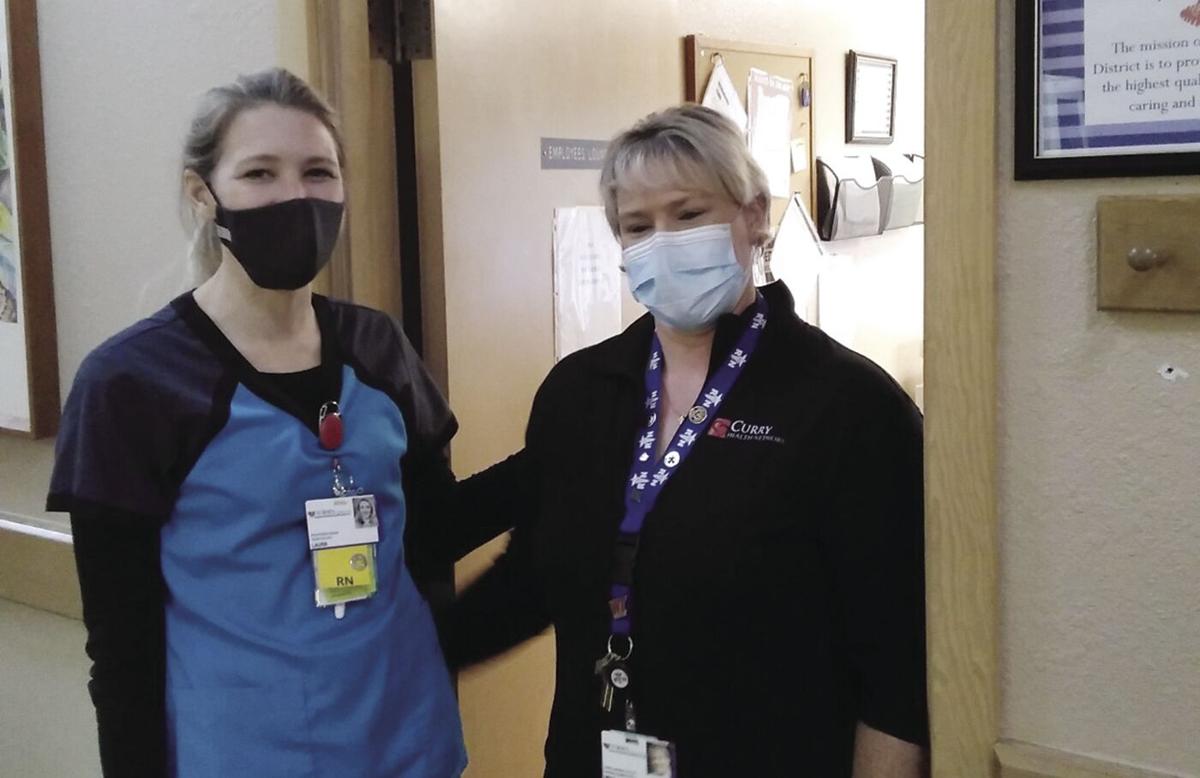 Carol Betush and Eleanor Foskett work to get people signed up for the COVID-19 vaccine.

As supplies of the COVID-19 vaccine slowly become more stable, Curry County’s hospital system is ramping up its vaccination effort.

As of Monday, data from the Oregon Health Authority showed just over 1,400 people in Curry County have received a COVID-19 vaccine, including just over 170 who’ve been fully vaccinated with the two-dose sequence.

Curry Health Network has been vaccinating health care workers and other Phase 1A populations since it received doses of the vaccine in December. But just last week, staff at the hospital took the first step of expanding vaccine access with several clinics across the county.

The clinics aren’t mass vaccination events, and appointments are required for the narrow group which is eligible to receive vaccines under state guidelines – but hospital CEO Ginny Williams says staff are doing all they can to get shots into arms.

Currently, individuals in Phase 1A and educational staff are eligible to receive vaccines. Williams said the hospital reached out to a number of organizations in health care settings early in the vaccine rollout to offer vaccination appointments for staff.

“For those that want it, we’re almost 100% complete with those folks,” Williams said.

Teachers and other educational staff – the next group after health care workers on the Oregon vaccination schedule – are well on their way to being completely vaccinated, too, with Williams projecting they’d be complete by the end of the week.

The hospital receives shipments of vaccine each week, and the goal is to use up that quantity by week’s end, maximizing efficiency with appointments scheduled online and a staff of volunteers which moves vaccine recipients from registration to post-shot observation in a matter of minutes.

So far, Williams said CHN has come close to that goal, usually with a small handful of each week’s doses still in vials by the end of the week.

But a fact she’s proud of?

“To date, we have not wasted one dose,” Williams said.

That takes planning: CHN’s vaccination clinics are currently scheduled to cycle through the network’s hospitals and clinics in Port Orford, Gold Beach and Brookings Friday through Monday, with pre-scheduled appointment times for each eligible individual.

But with only a specific number of appointments, there can end up being more doses at a clinic than patients, if someone doesn’t show up at their scheduled time.

Since COVID-19 vaccines expire relatively quickly once they’ve been taken out of freezers and mixed for administration, clinic staff have to act quickly to make sure those doses get used, not thrown away after they expire.

So CHN calls for backup: A waitlist of people in the area interested in getting a vaccine when their time comes. As clinic staff discover they have additional vaccine available at the end of a day, they reach out to those who’ve already signed up and offer them the impromptu doses.

Right now, that interest list is available for anyone 65 or older, and the signup is online at www.curryhealthnetwork.com/education.

Patients should bring their insurance cards when receiving the vaccine – the costs are covered by insurance (or by another program for those without insurance), but an insurance card is still necessary to bill the right place.

Williams said CHN is following state guidance for vaccine eligibility – meaning vaccines will be available for individuals 80 and up starting Feb. 8, with the eligibility age decreasing by five years each week after that until age 65, though CHN may have to take a slower timeline as the eligible population grows faster than available doses.

CHN is ready to keep expanding its vaccination clinics, but Williams said doses of the shots are the limiting factor in how much the network can do each week. Her staff estimates it could administer 360 doses a day at full capacity, but is only receiving about 300 a week from state health officials.

What’s more, another challenge is timing, since state officials announce on Thursdays how much vaccine they’ll be shipping the very next week. That doesn’t give Williams and her team too much time to plan, she said.

Still, she said CHN is making the best of the doses it gets. Williams attributes much of that to the network’s staff, as well as a cadre of volunteers supporting the system.

“It does take a concerted effort,” Williams said. “It requires you to have additional staffing.”

Janet Hoffman, the executive director of the Curry Health Foundation, manages those volunteers.

“We’re kind of just the ones that make sure everything flows right,” Hoffman said.

Hoffman’s volunteers staff the entryway of the CHN clinics, and guide people from registration to the lobby where they’ll get their shots. From there, they direct patients toward the second lobby.

“The second lobby is where our lobby monitors are asking for symptoms,” she said.

Volunteers are trained by the hospital on things they might encounter during the clinics, like the kinds of symptoms to watch out for after a shot is administered and how to navigate patient privacy laws.

They’re also required to be flexible, Hoffman said, in case CHN receives a different number of doses than was planned for and schedules have to change, since “what’s basically setting the schedule right now is when the vaccines come in.”

“We do have these very dedicated volunteers and they’re doing a great job,” she said.

At least one other organization in Curry County is distributing vaccines, too. AllCare Health is planning a vaccination event for Feb. 6 and 7, according to organizer Cameron McVay.

That event will deliver between 200 and 250 vaccines to people with intellectual or developmental disabilities, a group identified by state health authorities as necessary to vaccinate, according to McVay.

“The state had made it a priority,” McVay said. “We’re happy to focus on that population.”

McVay said many eligible caregivers of eligible individuals have been contacted and that, with vaccines in such high demand, AllCare’s future mass vaccination plans still haven’t been finalized.

For more information about eligibility for AllCare’s vaccination event, contact its Brookings office at 541-471-4106.

To sign up on Curry Health Network’s vaccine waitlist for those over 65, go to www.curryhealthnetwork.com/education. Sign-ups can also be done by emailing to covidvaccine@curryhealth.org or by calling 541-247-3119, though Williams warned that busy phone lines make going online the best option.