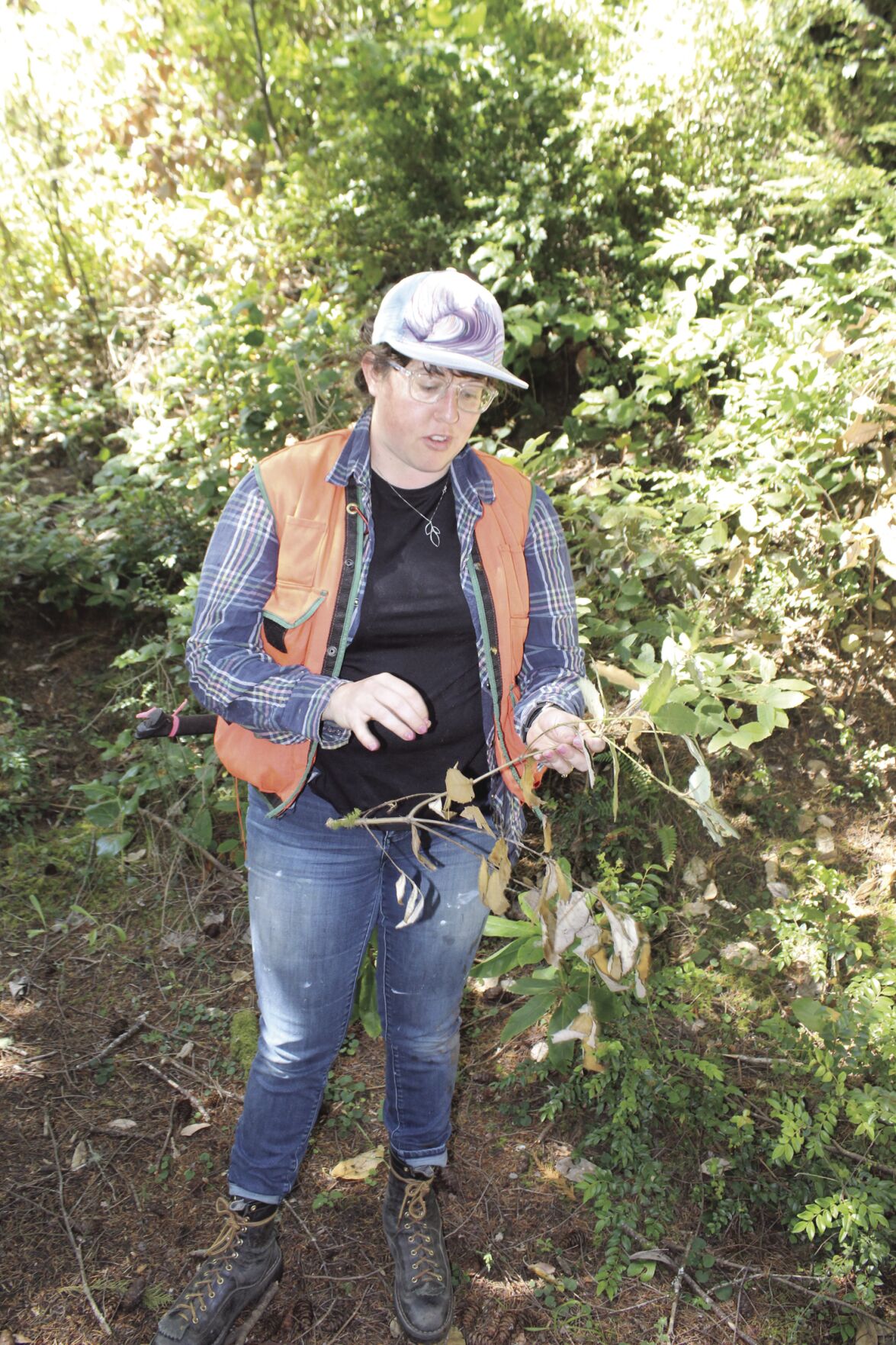 Sarah Navarro, a forest pathologist with the U.S. Forest Service, holds a piece of a tanoak tree that is dying from sudden oak death. 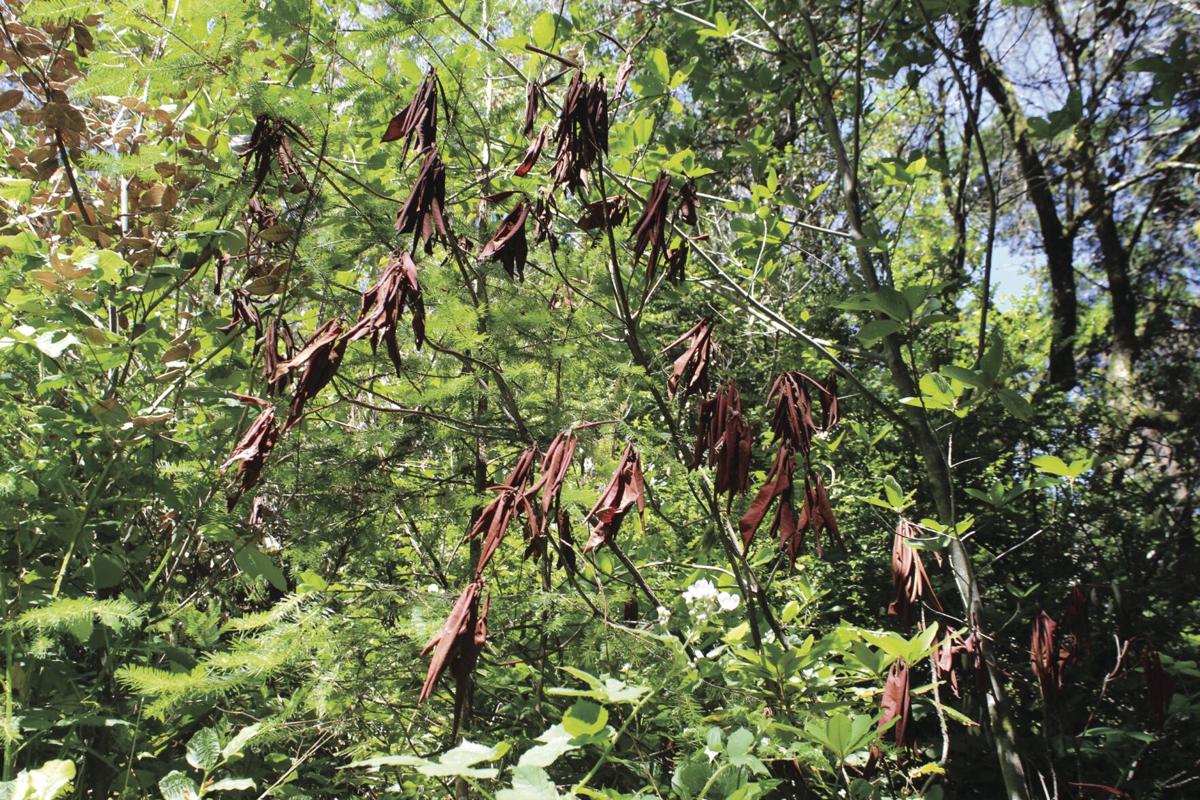 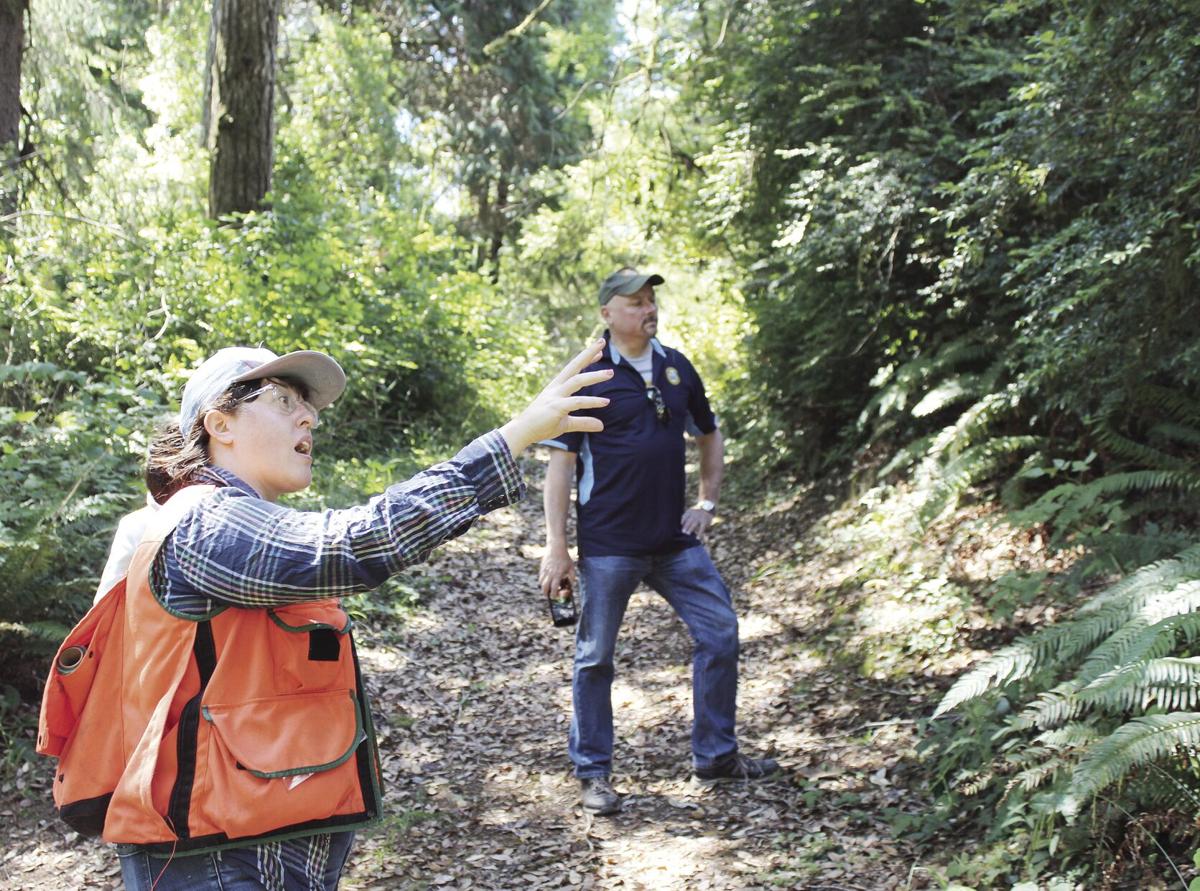 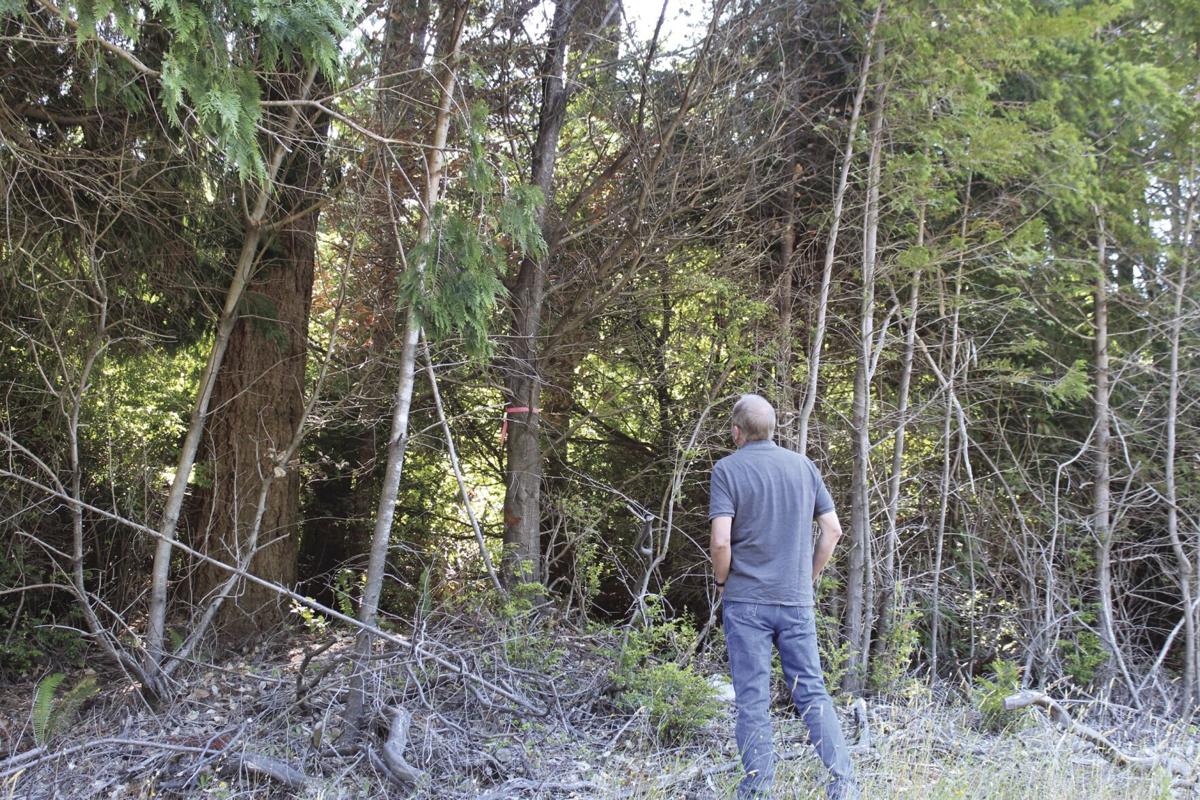 5 – Sudden oak death will cause leaves on tanoak trees to turn brown within three months. Over time, the leaves will fall off and the tree will fall over. 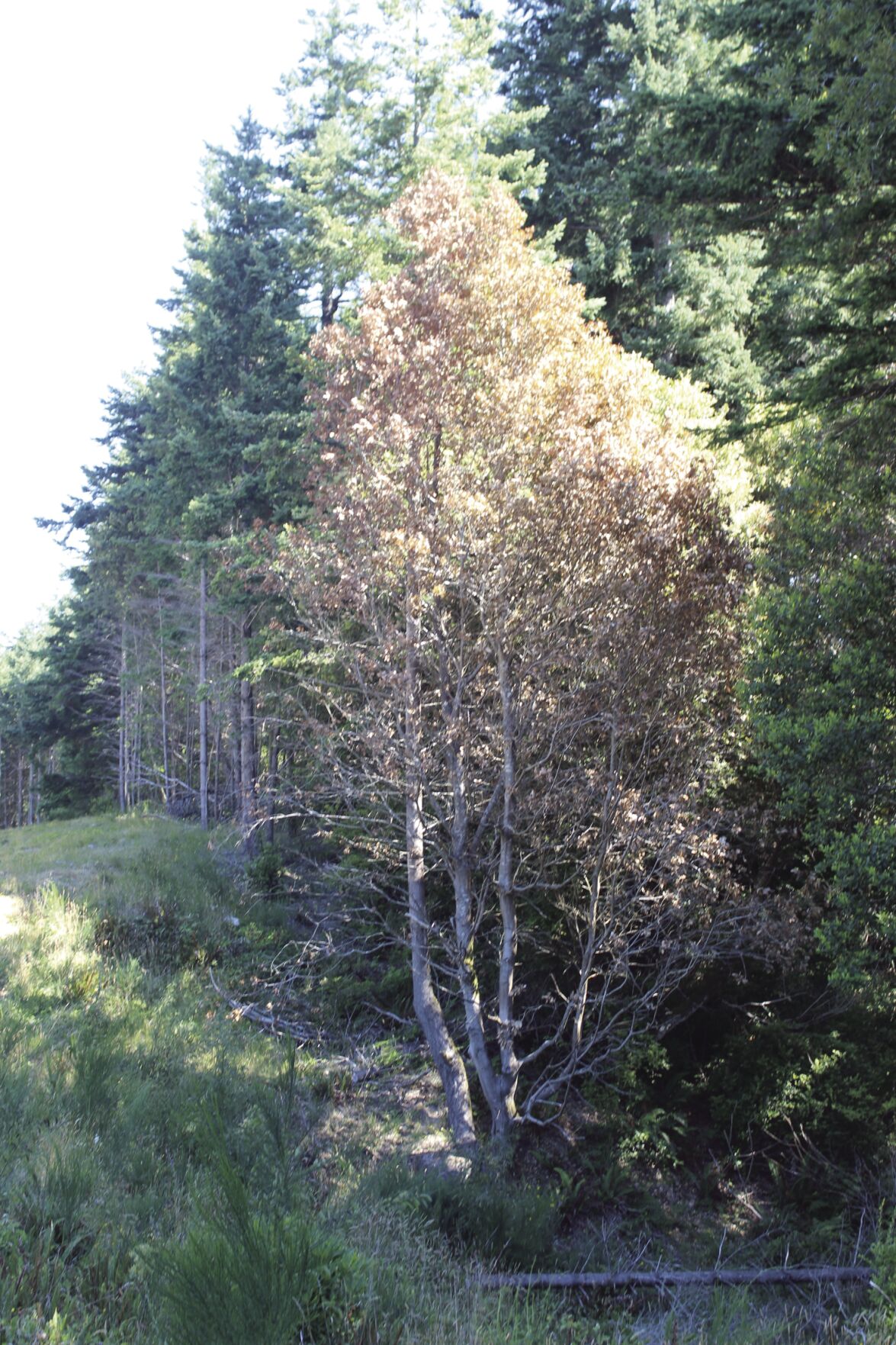 Sudden oak death will cause leaves on tanoak trees to turn brown within three months. Over time, the leaves will fall off and the tree will fall over.

Sarah Navarro, a forest pathologist with the U.S. Forest Service, holds a piece of a tanoak tree that is dying from sudden oak death.

5 – Sudden oak death will cause leaves on tanoak trees to turn brown within three months. Over time, the leaves will fall off and the tree will fall over.

Sudden oak death will cause leaves on tanoak trees to turn brown within three months. Over time, the leaves will fall off and the tree will fall over.

Sudden oak death is nothing new to residents of Curry County, but despite decades of work to keep the pathogen that kills tanoak trees isolated, it appears to be moving.

Earlier this year, a researcher with Oregon State University noticed tanoaks dying at a site on Highway 101 just north of Port Orford. When the trees were tested, they came back positive for sudden oak death.

Since then, the U.S. Forest Service, Oregon Department of Forestry and Oregon State University have been working to find other tanoak outbreaks in the Port Orford area. What they have found is troubling at least. Hundreds of trees and close to 400 acres have been verified as infected, leading to an emergency quarantine area around Port Orford.

Sarah Navarro, a forest pathologist with the U.S. Forest Service, has been leading the research in the area. On Monday, she led a tour of the infected area, showing what she has found and laying out plans to eradicate the pathogen.

While sudden oak death is a threat in both regions of the county, there is a difference. In the Brookings area, the trees are under attack from a variant called NA1. In Port Orford, a new variant called NA2, is responsible for the trees that are dying.

“This is the first time the NA2 variant has been found in the forest,” Navarro said. “They have been in nurseries since 2012, but the incidents in nurseries have been declining.”

The experts on the tour said it is possible the new variant came from the county transfer site, which sits just feet from the earliest outbreaks. While mostly home garbage is dumped at the site, it has accepted yard waste, including tree clippings for years.

While the research in Port Orford is new, Navarro said the outbreak is not. She said based on the damage seen on trees in the forest, it likely has been around for at least four years.

“It was most likely cooking in the area, and the reason we caught it was along the highway,” she said.

Navarro said the U.S. Forest Service hired a contractor, who flew the entire area last week to take high-definition photos of the forest. When those pictures are reviewed, it will give a greater idea how widespread the outbreak is.

“We still have a lot of looking to do in this area,” said Randy Wiese with the Oregon Department of Forestry.

The new outbreak is 21 miles north of the quarantine area near Brookings and only 17 miles from the Coos County border. Sudden oak death has also been found in Del Norte County across the California border. It appears to be moving north, likely following the wind patterns.

When trees are infected, the first sign is leaves begin to die and turn reddish-brown. In time, the entire tanoak will die.

“They’ll turn that reddish color in about three months,” Wiese said. “They’ll have it for up to four years. Eventually, they’ll go leafless and fall over.”

While 127 different tree species can carry sudden oak death, the tanoaks and rhododendron are impacted the most.

The only way to treat an outbreak is to cut down and burn infected trees. Generally, all tanoaks and rhododendron trees near an outbreak are also destroyed. Property owners can safely cut down their own tanoaks and use the wood for burning.

Navarro said there is concern the spread could continue moving north. SOD is a mold-like pathogen. Right now, there are no spores because it takes moisture to reproduce. But after rain, SOD can make new spores, which are carried by wind to areas not impacted.

“We know natural spread can be up to five to six miles, and we know tanoaks go into Coos County,” Navarro said.

To determine how widespread the impact is, forest pathologists like Navarro hike through the forests, mostly on private land. They look for signs on SOD on trees and cut chunks out of the trees that are sent to Oregon State University to be tested.

The Asian market, where most local timber is sold, will not allow imports if SOD is in the region.

State Rep. David Brock Smith has been working on SOD issues since he become a Curry County commissioner is 2013. He said the future of Oregon’s South Coast is on the line if SOD can’t be stopped.

“If we can’t get a handle on this stuff, it’s going to have long-term impacts on the industry,” Brock Smith said. “Thanks to all the good work of everyone here, I have been able to move forward to really elevate this and the need at the state. We have gotten $1.7 million every biennium. Sen. Merkley has gotten even more money.”

And the money is desperately needed. With the Port Orford site estimated at 388 acres, and a cost to treat and destroy infected trees averaging $5,000 an acre, the full $1.7 million from the state will be needed just to slow the spread near Port Orford.

One thing the researchers would like to get is an air-curtain incinerator. With burning in the deep forest challenging and threatening due to wildfire danger, the incinerator could be used to safely burn nearby. The equipment would also limit smoke and other particulates from entering the air.

“If you need anything, I’ll call the governor and say this is what we want to do,” Brock Smith told Navarro.

With SOD moving across Curry and Del Norte counties and threatening Coos County, Navarro said the key to finding and stopping the pathogen is property owners. In the Port Orford area, SOD has likely been present for at least four years, but it was only located when it infected trees along Highway 101.

Navarro said property owners can keep an eye on their trees. If they notice tanoaks or rhododendron with leaves turning brown, they should contact the Oregon Department of Forestry, which can determine if SOD is present.

Norma Kline with Oregon State University Forestry and Natural Resources Extension in Coos and Curry counties plans to provide information sessions about the disease to the public this summer in Port Orford. This will help local residents identify symptoms of sudden oak death so they can report any signs of it on their property.