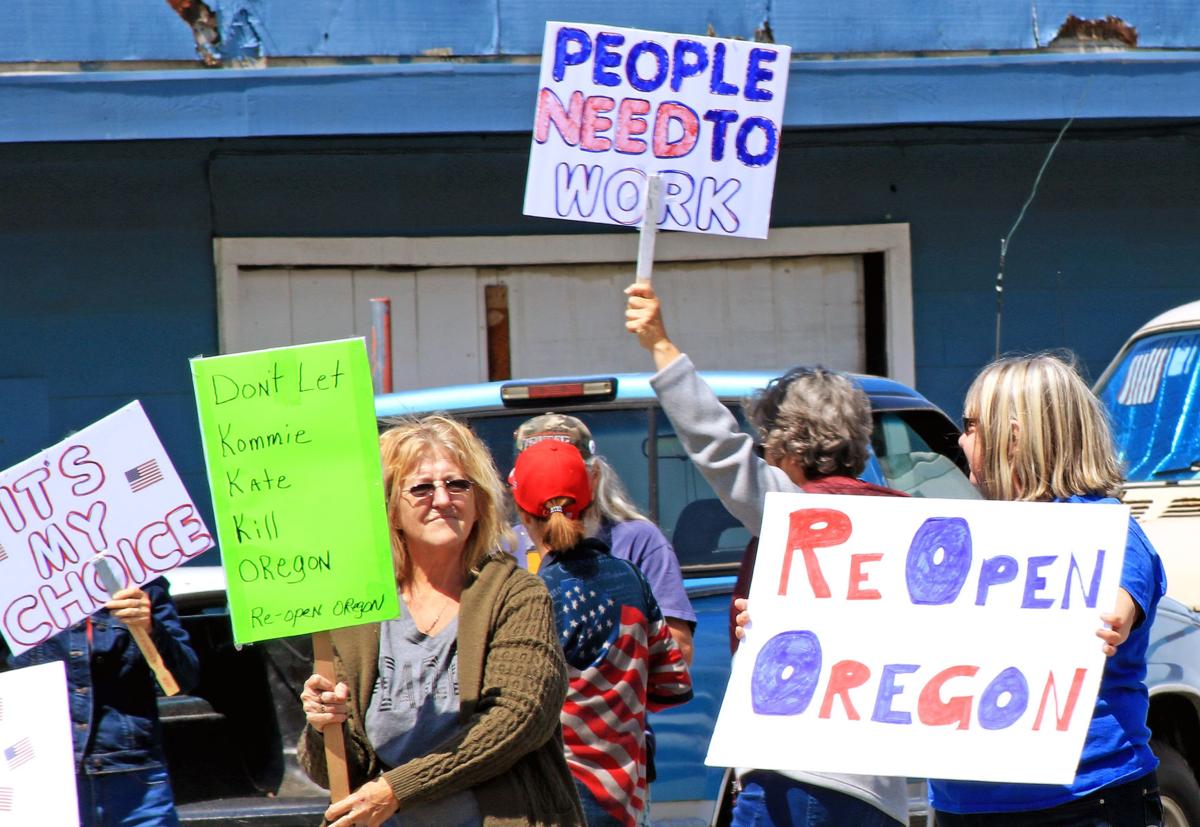 More than 50 people rally to reopen Oregon in Brookings on Sunday. 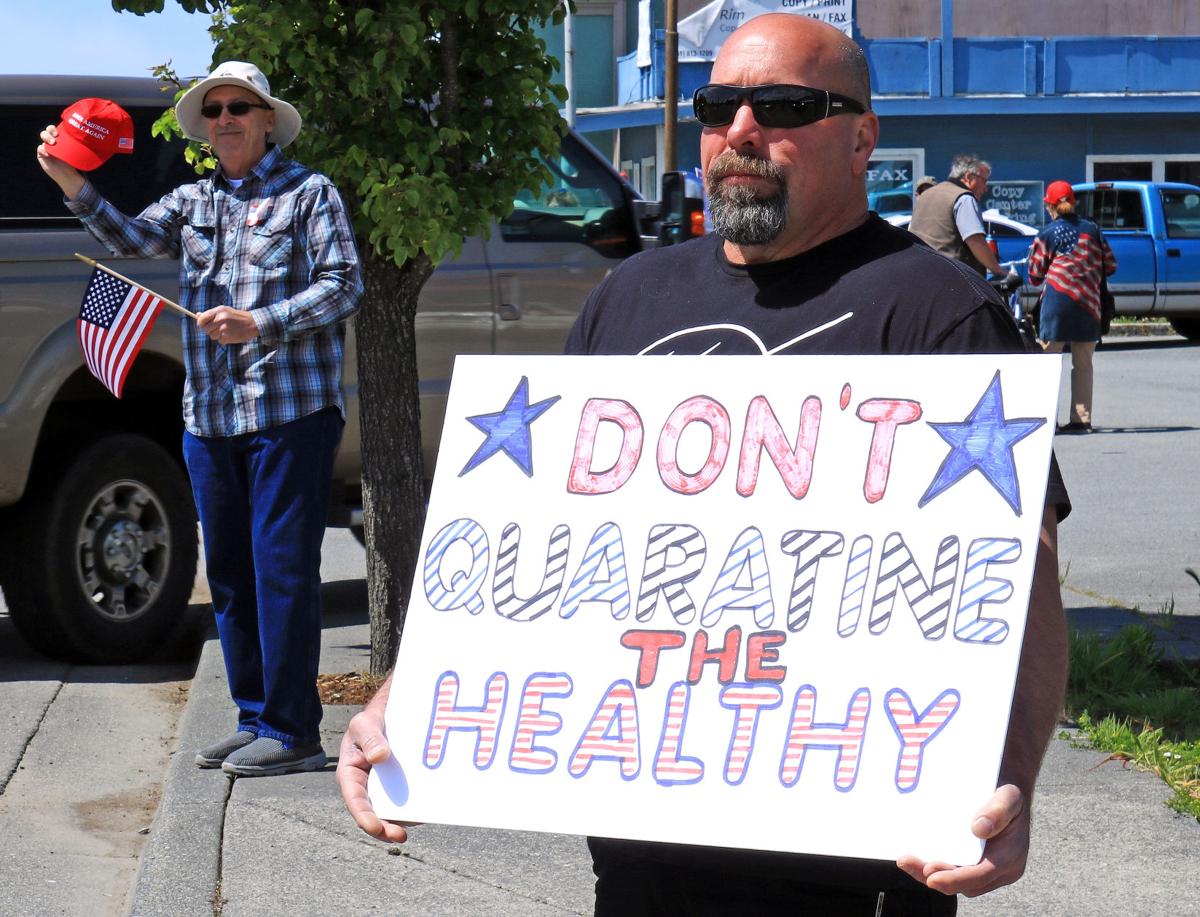 A reopen Oregon rally was held Sunday in front of Goldilocks Antiques and Coast Auto Center in Brookings. 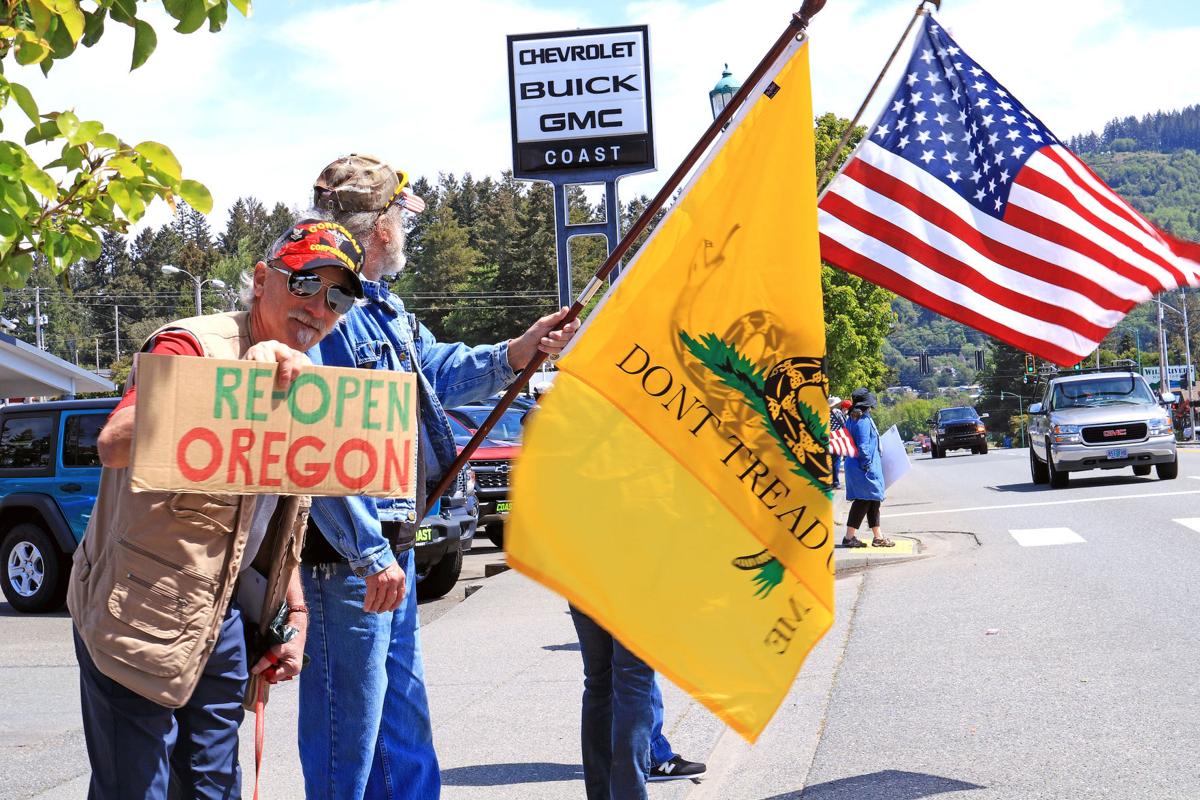 People held signs and flags during the reopen Oregon rally in Brookings on Sunday.

More than 50 people rally to reopen Oregon in Brookings on Sunday.

A reopen Oregon rally was held Sunday in front of Goldilocks Antiques and Coast Auto Center in Brookings.

People held signs and flags during the reopen Oregon rally in Brookings on Sunday.

More than 50 people rallied to reopen Oregon in Brookings on Sunday.

The state has been mostly shut down since Gov. Kate Brown issued stay-home orders in March due to novel coronavirus concerns. Reopen rallies were held throughout the state this weekend, most occurring during a drizzly Saturday.

“We need to open Oregon, especially Curry County,” said local organizer Dianna Blazo on Sunday in Brookings. “We want our county to open. People want to work. They don’t want the government handouts. They want to get to work. If people are that worried about it they don’t have to come out shopping, send someone else. But for those of us that want to work, open it up.”

There were plenty of people in agreement judging by the honking, thumbs-up and applauding coming from the cars and trucks that passed in front of the group lined along Highway 101 in front of Goldilocks Antiques and its next-door neighbor to the south Coast Auto Center.

This reporter did not see any negative response to the crowd from passersby during the hour-long rally geared toward easing COVID-19 restrictions.

To date, Curry County has had four confirmed COVID-19 cases and zero deaths. All four have recovered. It's been more than a week since the last confirmed case. Curry Health Network can do rapid testing, drive-up testing and antibody testing and said it has over a month's supply of personal protective equipment.

“This is for everybody,” Blazo said. “I know it’s not just Republicans that want this. We want everybody to be able to go to work. It’s sad that we are not being allowed.”

A day earlier, a dozen people rallied in front of the Curry County Courthouse, while the largest protest was held at the Capitol in Salem.

On Sunday, attendees in Brookings waved U.S. flags and a “Don’t Tread on Me” flag and had signs with slogans like “Reopen Oregon,” “Don’t Quarantine the Healthy,” and “Everyone is Essential.”

Since Gov. Brown’s stay-home orders and social distancing were put in place businesses deemed non-essential were closed. Those that were allowed to operate have done so under heavy restrictions. People fear many businesses will never recover.

“What I believe is that the state did not need to be shut down,” said rally attendee Dora Costa. “I think it’s more important that people work and that people practice good social distancing and all of that but you don’t need to make people stay home and stay away from work to accomplish that. It’s doing more harm. My heart is broken for the small businesses that are struggling so badly right now.”

During a news conference Friday, Gov. Brown said Oregon could start opening up as early as May 15. The decision to reopen the state resides with the governor.

“If they can shut it down immediately. They can open it immediately,” she said.

Blazo was pleased with the amount of support the rally received.

“Amazingly well. Amazingly well,” Blazo said. “We were a little nervous because of the rain yesterday. We have had a great turnout. We are absolutely thrilled to see this kind of turnout.”

Fewer restrictions as Curry approved for move to 'Phase II'

Curry County should reopen all businesses, and those who are afraid can stay home. Let those of us that are NOT afraid go back to work and get our towns back on their feet. Governor Brown is following the dictates of a couple of other governors, instead of listening to the people. It's time to vote... VOTE HER OUT, along with her buddies who seem to want to go along with the demosocialists.

Two of the three responses involved “political references “, which tell me that the motivation for concerns have nothing to do with human safety!! It’s obviously motivated totally by political concerts!! Politics have nothing to do with human safety, unfortunately the current administration is only concerned with social division.Seems to me that the same old Fox News watching morons are up to their same old BS!!!

My heart goes out to the owners of small businesses in our town but instead of holding rallies to undermine our elected officials and ignoring the health and scientists advice I have been supporting them whenever I can. My biggest fear is I will unknowingly infect someone with this deadly virus. I for one am willing to wait. The people involved in the Brookings rally said they were doing it for us. What it

showed was their total disregard for their neighbors safety by ignoring the social distancing and lack of face masks.

I completely agree with you, nangar43. These people don't care one iota about public health.

Same here... Trust the science, trust those educated in the fields the rest of us are not. Not trusting them has led to far more sick and far more death than should have ever taken place. The longer people want to ignore the responsibility they have to their fellow citizens and gather like this the longer its going to take to get back to work. We all have to make difficult sacrifices, but in the end, if you're dead you can't go back to work.

These gatherings are not the majority , the majority are just doing what was asked and staying home until restrictions are lifted.

Fewer restrictions as Curry approved for move to 'Phase II'