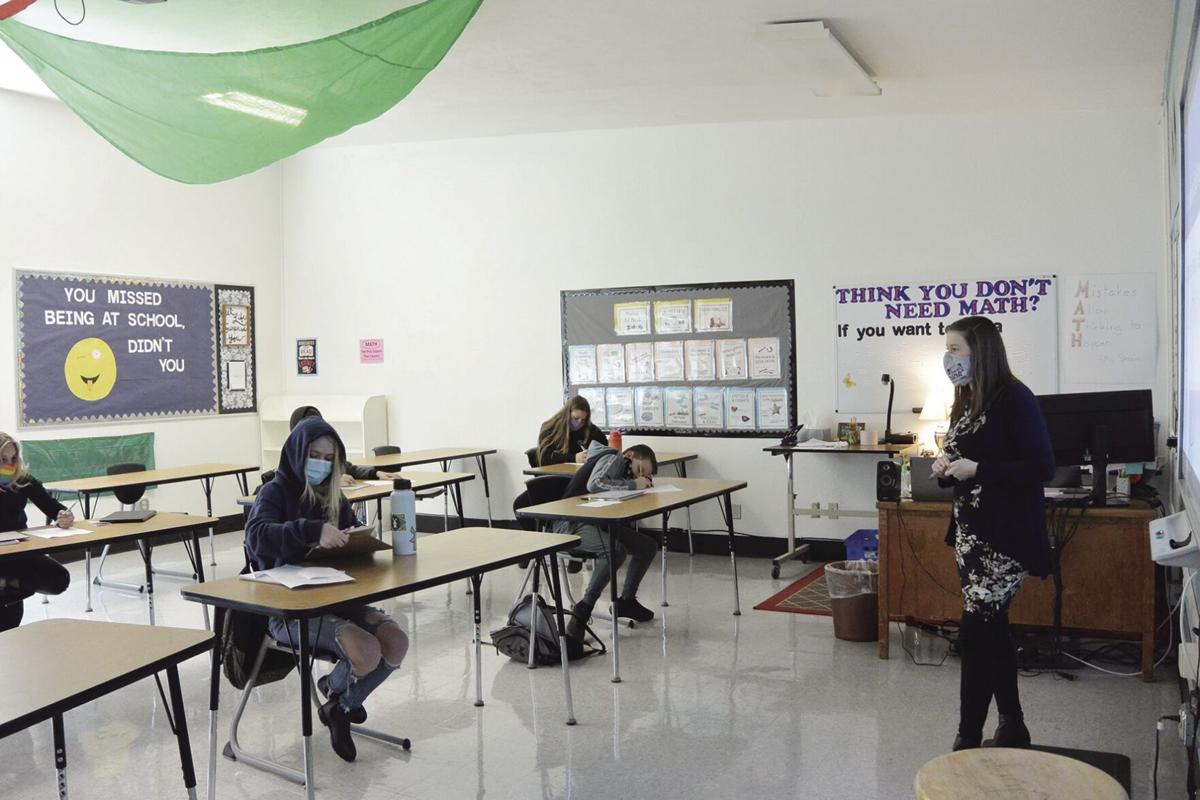 Sixth grade math teacher Megan Strain teaches an AM cohort class at Azalea Middle School on Thursday, Jan. 7. It was the hybrid sixth graders first day back to in-person face-to-face classes since a pause and shift to distance learning that started on Nov. 30. 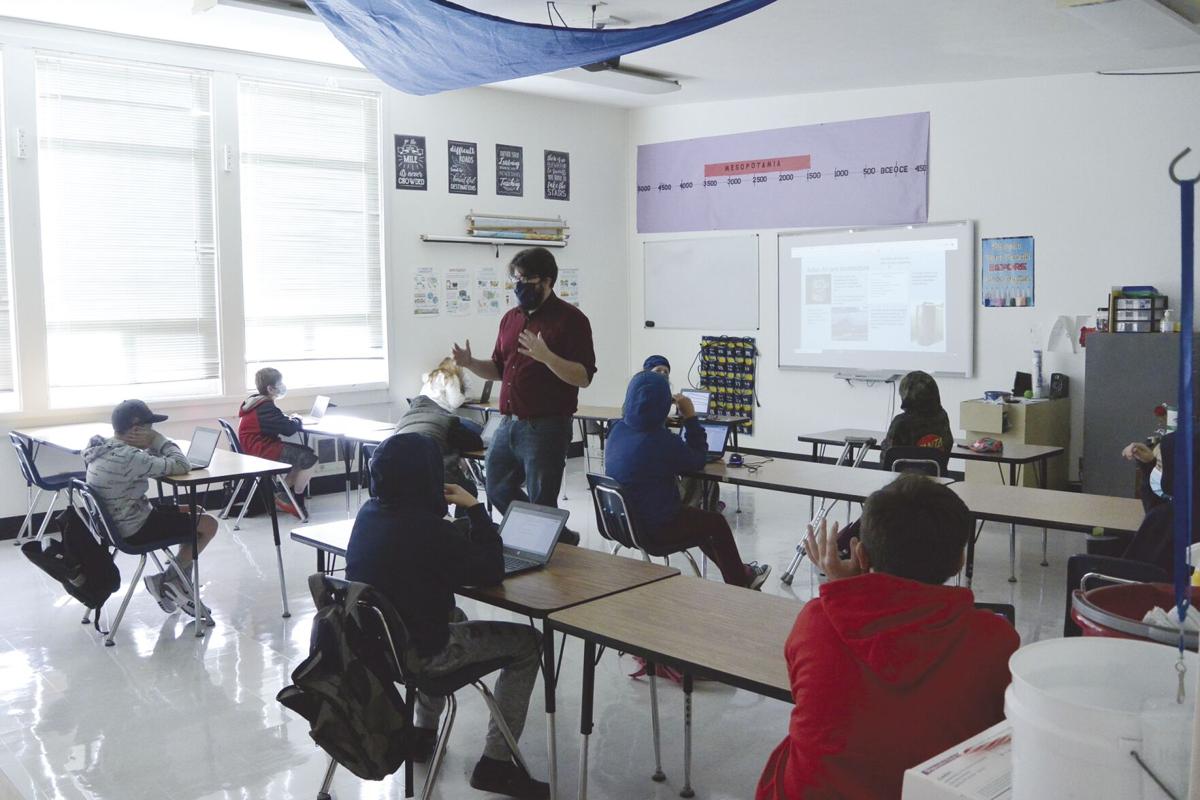 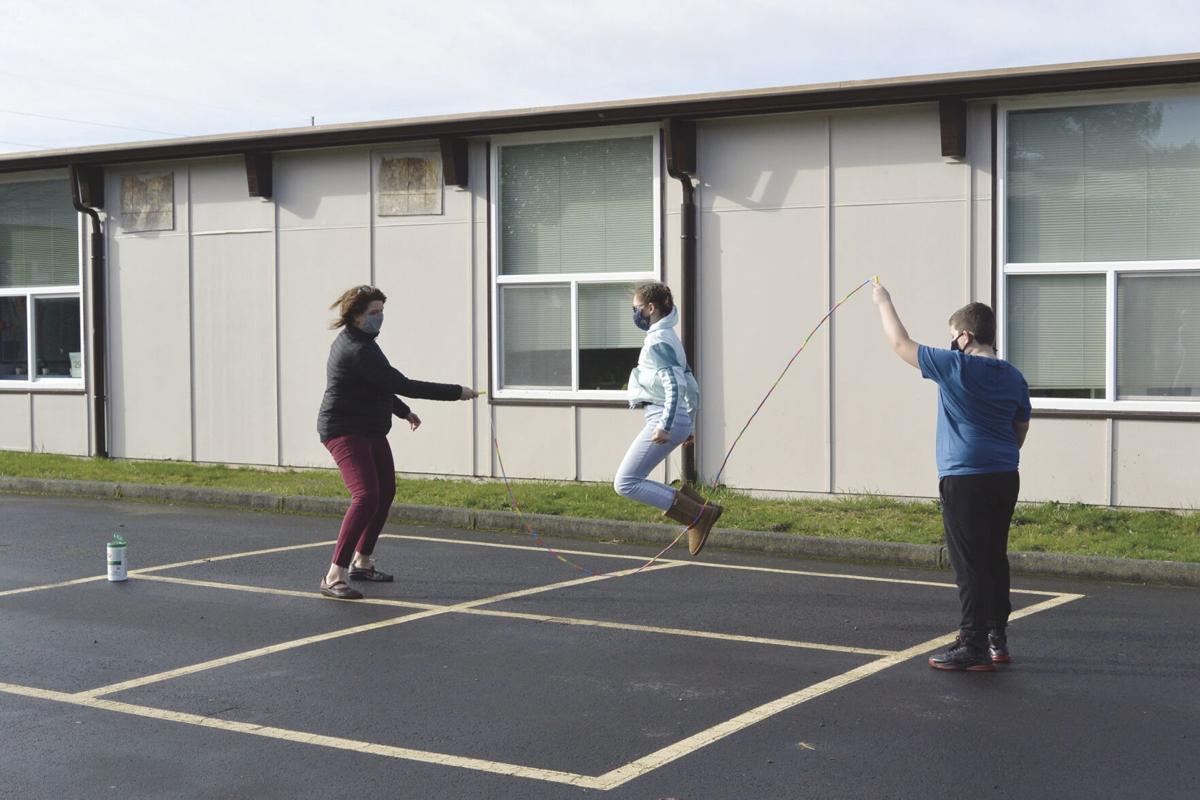 Fifth grade teacher Kerrie Phillips (at left) enjoys a moment of sunshine with her AM cohort students at the end of their first half day back on campus Thursday, Jan. 7, since a pause and shift to distance learning that started on Nov. 30.

Sixth grade math teacher Megan Strain teaches an AM cohort class at Azalea Middle School on Thursday, Jan. 7. It was the hybrid sixth graders first day back to in-person face-to-face classes since a pause and shift to distance learning that started on Nov. 30.

Fifth grade teacher Kerrie Phillips (at left) enjoys a moment of sunshine with her AM cohort students at the end of their first half day back on campus Thursday, Jan. 7, since a pause and shift to distance learning that started on Nov. 30.

Students in Brookings are finally back in the classroom – well, most of them.

Since Jan. 4, the Brookings-Harbor School District had been phasing in a return for students who’ve opted in to face-to-face classes. By Jan. 14, all of those students are scheduled to be in school buildings for at least a few hours a day.

So far, the return has been going smoothly, said Superintendent David Marshall.

The changes were made possible by loosened requirements from state health and education authorities. Just two days before Christmas, Oregon Gov. Kate Brown announced that the four-tier risk framework for reopening schools that had been imposed in late October was to become only advisory, not mandatory.

At the time, Marshall was a little surprised by the announcement, which meant his district had more responsibility in deciding what form of school would be the safest for its students.

“This one was just sort of dropped on everyone,” Marshall said.

Earlier in December, the district had moved all students back to online classes for the few weeks before winter break due to rising case counts in the county and uncertainty about what future state requirements would allow.

But now with future options more in the hands of local officials, and case counts declining, Marshall said district leaders felt getting as many students as possible back into classrooms would be the most beneficial option.

Now, Marshall said the district is keeping an eye on case counts locally and is better able to make decisions based on what’s going on in the district, not in Curry County as a whole. The goal with the slow phase-in is to avoid having to jostle students and teachers between online and in-person classes.

“We’re doing everything we can to avoid that,” Marshall said. “That is emotionally exhausting for staff and students.”

Still, in-person classes don’t look the same as they did in the past.

For one thing, only half of all students attend at a time, switching off between morning and afternoon cohorts. There’s a whole slew of procedures still required by the state, including mask-wearing policies, sanitation practices and space limitations.

What’s more, class on Wednesdays is no more – instead, the day is used by small groups meeting for hands-on activities like shop classes.

Another key difference from school years of the past?

“Boy, they are really psyched to be in school,” Marshall said of the students.

For many of them, months of learning through online assignments and video sessions have been a challenge. For some, in-person school was more stable than their home lives, forcing them to get creative – some have done schoolwork in their closets or other quiet corners of their homes, he said.

“Will there be a system-wide impact? Yeah,” Marshall said, noting that distance learning has been hardest for families with the least stability at home. “For this year, you’re not going to see the growth you would in a normal year.”

So, a return to in-person classes is a welcome change for many students – but not all. Some families have opted to remain with online school for the year, finding their students thrive more with that learning style.

Given the success some students have seen, that option will likely remain even after the pandemic is over.

“We’ve definitely made a lot of gains in distance learning,” Marshall said. “It really has informed and will continue to inform the conversation of how we can best meet the needs of our students.”

For now though, Marshall is hoping to keep school buildings open for the students who want to be in them. Had the county’s case numbers been slightly higher in the previous several weeks, the district may not have reopened all the classes it did.

“Thanksgiving week was a rough one,” Marshall said of the increased case counts which came from the holiday.

Since cases still have the potential to rise in the community and in schools, Marshall said the future of in-person classes isn’t set in stone either.

Homeschooling is superior. Homeschooled kids are better off anyway.