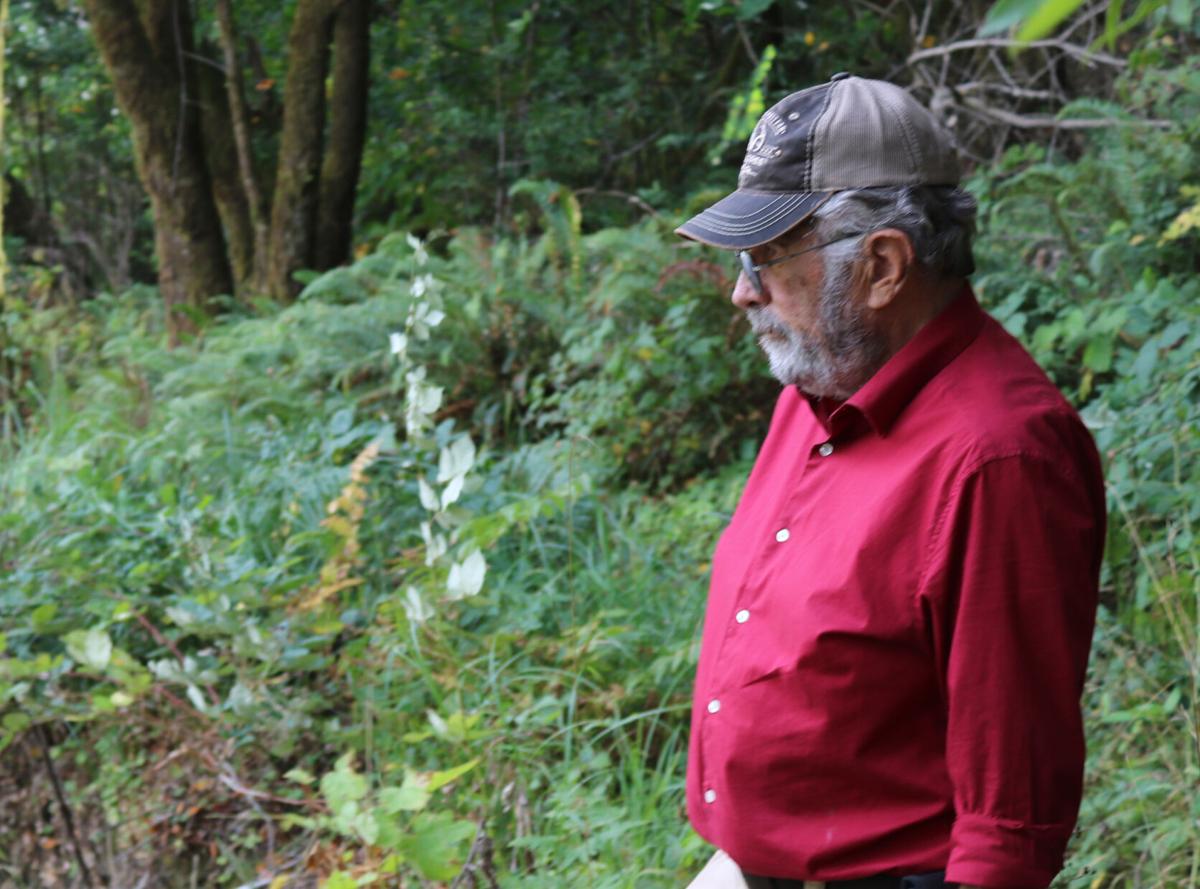 Bill Vogel ponders the loss of his favorite hike, the River View Trail in Loeb Park. 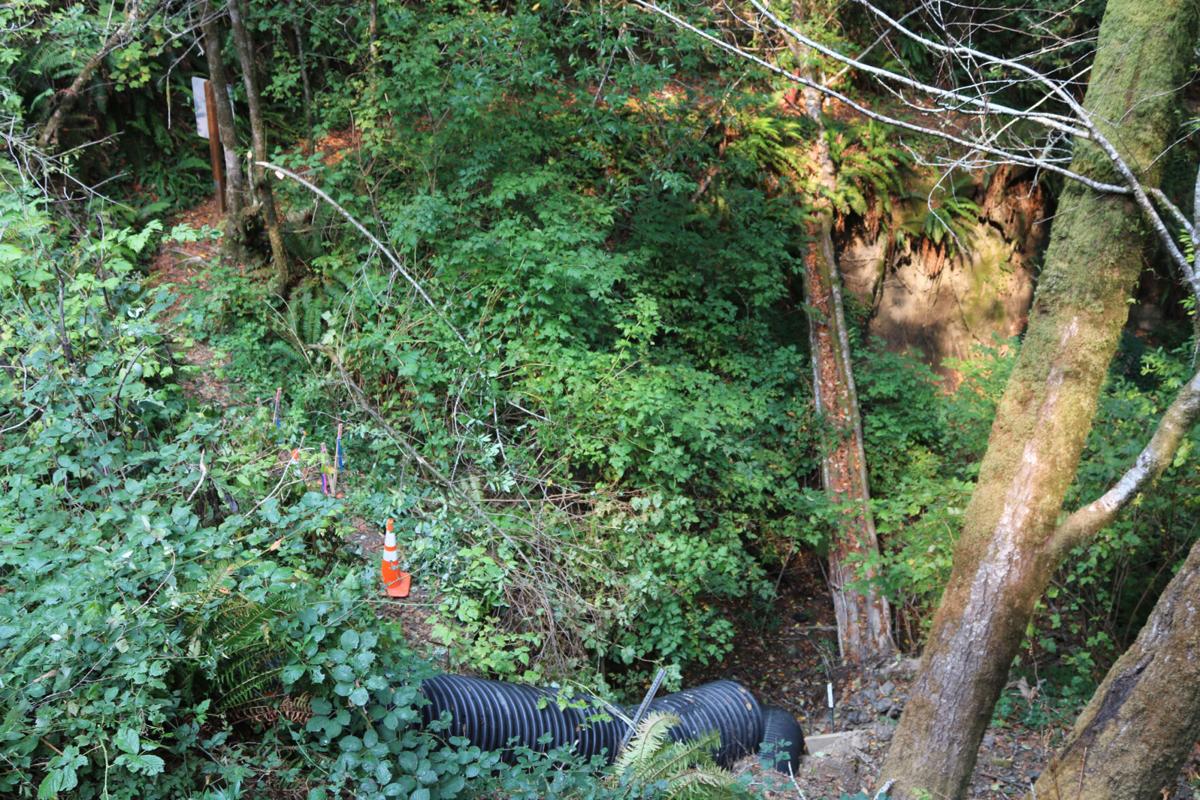 A county road culvert washed out the footbridge over a creek on the trail, but other damage may keep the trail closed even after the county replaces the culvert with a trail-friendly crossing. 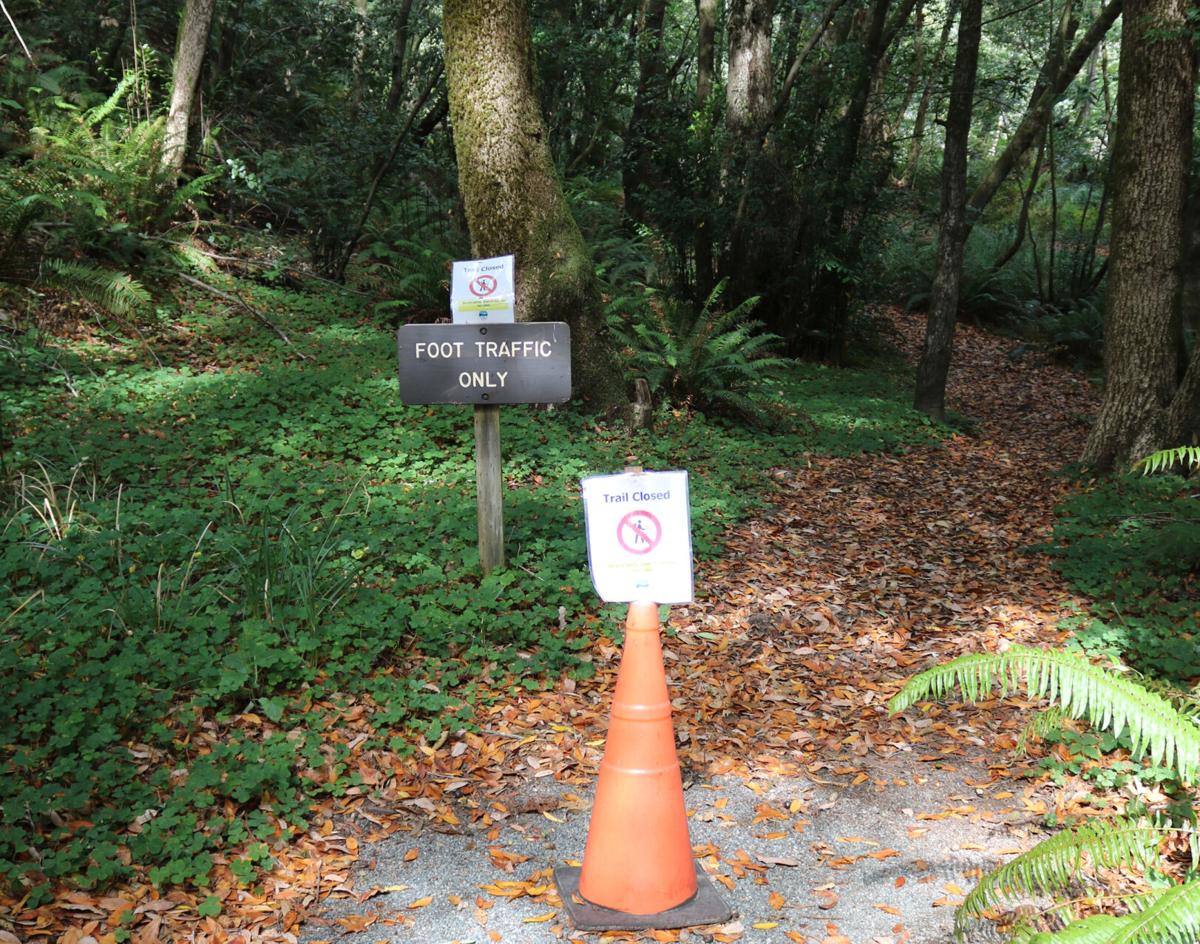 A thick layer of leaves obscures the path on the closed River View Trail at Loeb Park.

Bill Vogel is worried that Oregon State Parks wants to permanently close the River View Nature Trail at Loeb Park, one of his favorite hikes.

“They want to close this trail,” Vogel said. “They want it to go. It’s a pain to maintain, but we need a place to exercise,” he said. The Brookings resident, who is 78 years old, has helped maintain the trail over the past 20 years as a volunteer and uses it as a principal resource for personal exercise.

The scenic trail takes off from Loeb Park, located about 10 miles up the North Bank Chetco River Rd., and follows the Chetco River for a little over a mile through groves of giant, 200-year-old myrtlewood trees, lush ferns, small creeks and river views. The trail ends near the Redwood Nature Trail Loop, which makes for a good workout with its elevation gains and length when added to the River View Trail’s out and back distance, according to Vogel. The 320-acre park where both trails are located was acquired by the State in 1948 from Alfred A. Loeb to preserve the myrtlewood grove for public recreation.

One of the small creeks along the trail caused a major problem resulting in the trail’s closure in early January, according to Dani Padilla, Park Manager at Harris Beach State Park. “Heavy rain and high water on the Chetco caused significant damage along several sections of the trail,” she said. “A county road culvert failed and washed away the (foot) bridge, along with eroding the edge of the trail, making it completely impassible.”

Besides the culvert, two major landslides occurred east of where the culvert washed away. “Several large trees came down in the storm and caused root upheaval, which decreased the width of the trail down to less than one foot,” she said. The landslides have created a dangerous cliff edge along parts of the trail.

“We don’t know whether it’s even feasible to replace the trail or if other structures will be needed to shore it up. Basically the trees that were uprooted were what was holding the trail in place; now there’s nothing there. We need to assess the magnitude of the slide and geological challenges.” The trail traverses sections of sandy river loam.

The Curry County Roads Department has already awarded the bid to McLennan Excavation, Inc. of Brookings for replacing the county’s culvert that failed on the North Bank Road. The culvert work should be complete within the next week or two.

Curry County Roadmaster Richard Christensen assured that the replacement culvert work would be “trail friendly.” The culvert replacement will actually have a headwall that will allow trail users to walk across the top of it, according to Padilla.

Last January, Padilla had put in a request for funding for archaeologists and engineering to get the construction going on repairing the park trail, but with the loss of lottery revenue and having to close camping facilities that generate revenue due to COVID, those plans were put on hold. The Oregon Park system is not funded by taxes, but by camping and day-use fees, the Oregon Lottery, and a portion of state recreational vehicle registrations.

Sixteen seasonal positions were not hired this year and three ranger vacancies remain unfilled because of a freeze on hiring. State Parks and Recreation simply doesn’t have the staff to open up all their parks and maintain them at proper levels, Padilla explained.

State Parks already had a $22 million shortfall in the budget before the wildfires and wind storms hit up north, she said. “We really have to be cognizant now on how we spend our time and money.” Critical infrastructure needs, such as roads from the highway to even reach park lands, along with damage to power lines and sewer lines are considered bigger infrastructure needs than a recreational trail in southern Oregon.

Padilla doesn’t foresee her agency receiving any COVID relief funds from the state. However, they have applied for FEMA money to help pay for the infrastructure damage from fires and wind. Those funds reimburse expenses. Until then, State Parks won’t really know how the financial picture will end up.

“To be honest, I don’t think we will be able to have anybody out to look at that trail for the next two years,” she said. “But we definitely want to restore the trail. Getting rid of the trail is not part of the plan at all.”

To learn more about the Oregon State Parks’ challenges and how you can help, visit https://bit.ly/33DCK2Z.