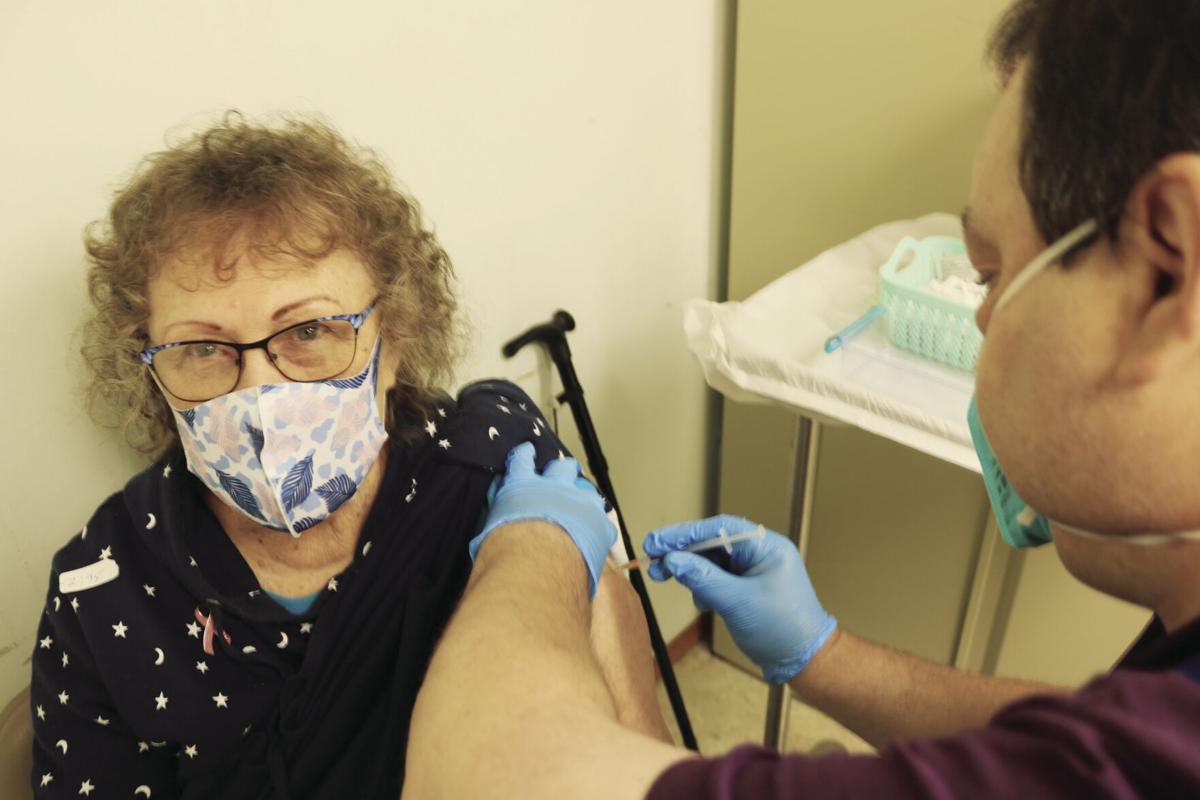 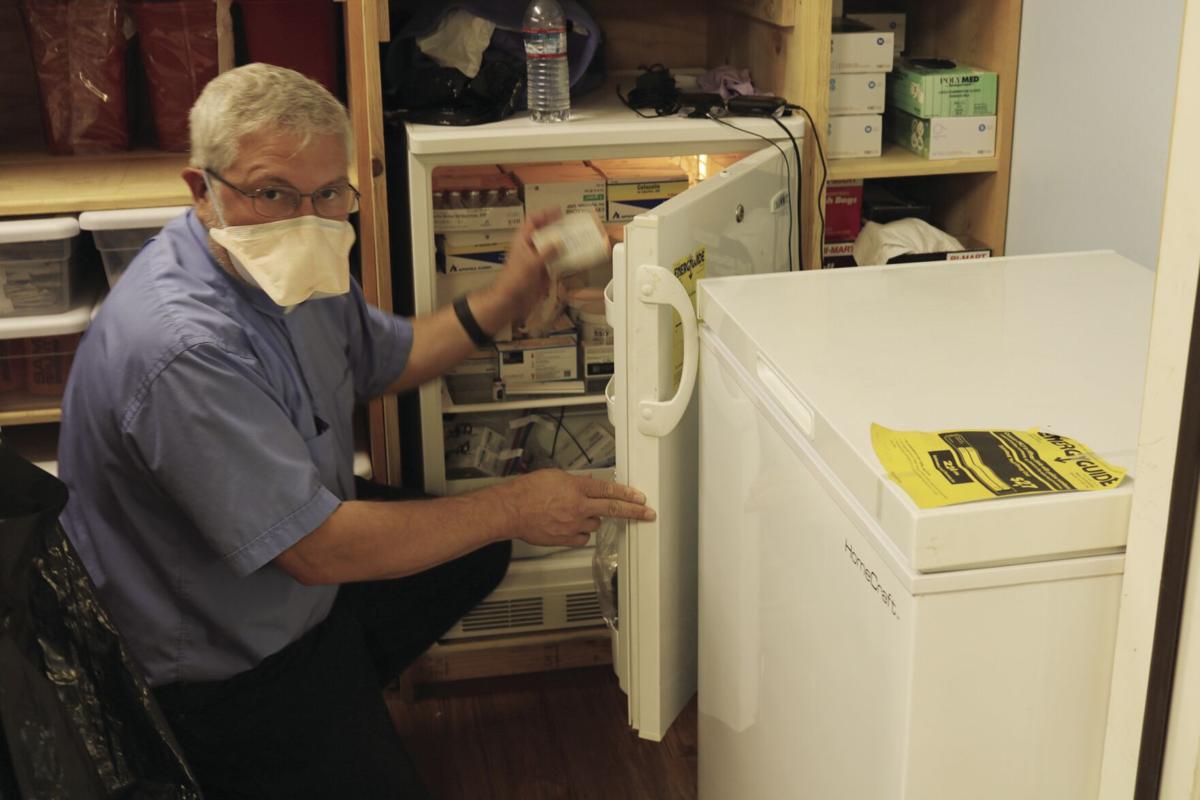 Father Bernie Lindley of St. Tim's pulls a box of vaccines from the refrigerator.

Father Bernie Lindley of St. Tim's pulls a box of vaccines from the refrigerator.

It’s Saturday afternoon, and members and volunteers of St. Timothy’s Episcopal Church are huddled at a picnic bench under a stately tree, steaming plates of ribs and calzone before them. Joining them is Diana Akiyama, the R.T. Rev., Bishop of the Episcopal Diocese of Oregon.

It’s been at least a year since Akiyama has been to St. Tim’s, but she made the six-hour trek from Portland to show support to one of the 70 congregations she oversees.

“Welcome!” shouts Father Bernie Lindley, the pastor of St. Tim’s who, for better or worse, is well known in the Brookings community. They all look up, including Bishop Akiyama.

Lindley quickly unfolds his legs from under the wooden table and strolls across the grass while simultaneously explaining that it’s a slower Saturday than usual. Plus, it’s only 12:30 pm - the start of the day for people to arrive to gain access to the many services the church provides.

For all this unfettered comradeship, however, not everyone in the community is pleased that St. Tim’s has hot food available to those who want it. Or, at least some wish it wasn’t every day.

On Oct. 5, the Brooking’s Planning Commission narrowly voted in a 3-2 vote to recommend to the city council that the city revise its municipal land development code in such a way that “benevolent meal services” be required to obtain a conditional use permit, as well as limit food services to three hours a day, two times a week.

Had Commissioner Cody Coons not abstained from voting due to his membership at one of the churches mentioned in the staff report, a potential tie vote could have created a tenuous recommendation from the seven-member advisory board due to a one-seat vacancy.

The matter will now go before the city council on October 25 for a final decision.

“I am not willing to express any opinion on this issue other than what I have already spoken in the public record,” stated Brookings Mayor Ron Hedenskog, following an inquiry on how he might vote at that meeting.

Hedenskog’s carefully-worded email response may have provided a glimpse, however, when he added “Bernie Lindley, vicar of St. Timothy, has threatened the city, twice, with litigation if we continue to pursue the matter,” Hedenskog added. “So, pending litigation, I have no comment outside of the public record.”

Other members of the council did not respond to emailed requests for comment.

Lindley, in fact, did threaten to sue during the planning commission meeting.

“The whole point behind this is to have a prepared meal for people every day,” Lindley said to the commission. “We are talking about folks who don’t have the capability to make their own meals. They live in a car, or they live in the bushes somewhere. They don’t have a refrigerator or stove, and even if they get food at the food bank, they can't prepare it anyway.”

Lindley added that pre-pandemic other churches in the community - Star of the Sea Catholic Church, Trinity Lutheran, Smith River United Methodist and Brookings Presbyterian - each pitched in to feed hungry Brookings residents or transients passing through. Currently, St. Tim’s, located at 401 Fir St., next to Azalea Park, provides food to the community six days a week.

“The only church that maintained a presence in the soup kitchen ministries, which we call community kitchens, was Trinity Lutheran Church,” said Lindley, referring to the year 2021.

Whether churches will reignite their kitchen pilot lights as the pandemic wanes, however, appeared to be a matter of debate.

According to Brookings Public Works Director Tony Baron, two other churches expressed interest in picking up some of the slack, thus taking the bulk of providing food to the community off St. Tim’s plate.

“We met with Star of the Sea and Presbyterian and they indicated they would cover two days,” Baron said. “Every church at the workshop had the opportunity to set these parameters. Two days seemed to be the norm with the three we spoke with.”

Lindley, however, expressed doubt that other churches would serve food any time soon.

“Other churches aren’t going to come forward,” he said. “We found that out in the course of the last 11 years. We would be compelled to continue to feed all four days, and as this went forward, we would quickly be in violation of this new city ordinance and if we’re fined, we would file a lawsuit against the city of Brookings.”

City staff was quick to point out, however, that the CUP requirement is not prescriptive, but rather a way to clean up the code to allow churches to serve meals two days a week because municipal codes now define what churches are doing as being “restaurants” - an activity currently prohibited in residential zones.

“The perception is that we are trying to close these kitchens down, which is not true,” Baron said.

Still feeling the sting of Lindley’s lawsuit comment, Commissioner Anthony Bond responded by saying “We’re being told ‘Hey, it’s my way or we’re going to court,’” Bond said. “That’s the second time you’ve (Lindley) said it. I personally don’t take threats lightly. I think that’s ridiculous and childish. If you’re not willing to work with the city, that’s too bad. That’s your loss.”

Commissioner Bond, Skip Watwood, and Clayton Malmberg then voted in favor of adding the definition of Benevolent Meal Services to the Brookings Municipal Code, as well as an added term that requires a CUP.

Four days after the planning commission vote, the little red church of St. Tim’s - which at first glance resembles an old barn or schoolhouse - continued with its services.

A couple from Brookings arrived to undergo a COVID test. One of them wore a mask adorned with cartoonish male genitalia, which either escaped the notice of Bishop Akiyama, or she was too polite to mention it as she gently swirled each nostril five times after he had removed it. The woman with him said they were both vaccinated and not feeling sick but had recently traveled and wanted to be sure they don’t expose others to the virus.

Another Brookings resident who had a fever also showed up, but he tested negative.

“Yesterday we tested 40 people, and two of them tested positive, including a 2-year-old child,” said Lindley.

In another area of the church, a Styrofoam sign attached to the door of a small health room advertised St. Tim’s official clinic status of the Oregon Health Authority. A designation made possible with an initial $230,000 grant, which was later bumped up by another $175,000 due to high demand for COVID tests and vaccines at the church.

According to Lindley, St. Tim’s has injected over 1,400 people, rapid-tested 3,500 (which includes tests given prior to vaccinations), and 575 people have learned they are positive for Covid as of July 27.

That, Lindley said, is when their wrap-around services truly come to light, including providing meal services.

While those devoted to St. Tim’s remained resolute to the ministry’s significance, police dispatch call statistics have painted a less rosy picture.

During the workshop held in June, it was noted that St. Tim’s experienced a “significant increase in calls for service through dispatch of the Brookings Police Department,” particularly when compared to other churches in the city.

In 2020, there were 154 calls for service to St. Tim’s - well above Star of the Sea Catholic church, which logged 24 requests for service. Trinity Lutheran, Seventh Day Adventist and Brookings Presbyterian logged 20, 19 and 13 dispatch calls, respectively.

The increased calls for police service, in addition to other concerns, spawned a petition signed by 29 neighbors. The petition requested from city hall that churches have limitations when it comes to benevolent meal services, with the hope that those receiving meals won’t trickle into nearby parks and other public spaces.

Tina Peters, who wrote a letter to the city during the summer workshop talks, said she is afraid to go to nearby Azalea Park, as is her daughter who she said once faced a transient’s strike of a whip while walking along a park path.

There are people coming out of the bushes, sleeping in sleeping bags and walking up to us to see if we have coins or food,” Peters stated.

“We are very sympathetic to people who feel threatened or concerned that their property has been trespassed,” responded Bishop Akiyama last weekend. “But, I don’t understand any public body - city, county, state - that does not want to take care of its people.”

It's one thing to help the local citizens but when druggies and low life's hear about free meals they will travel to find them. "If you build it they will come". We feel sorry for the folks that can't get ahead in this world and there are way too many. But when you have help wanted signs everywhere and people standing out if front with "anything helps" signs it should be obvious what's going on...