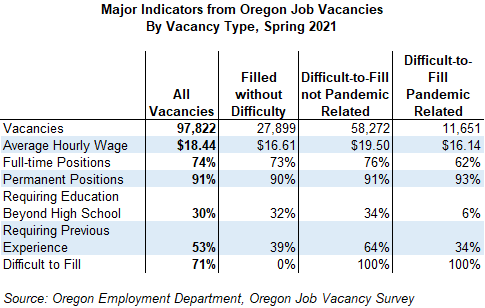 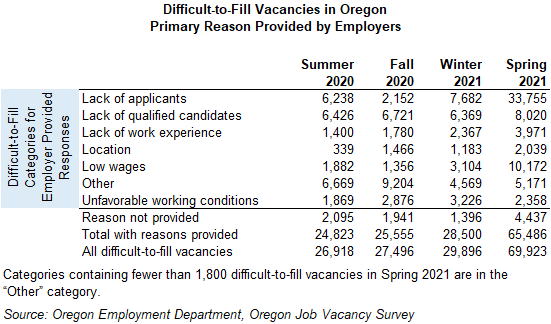 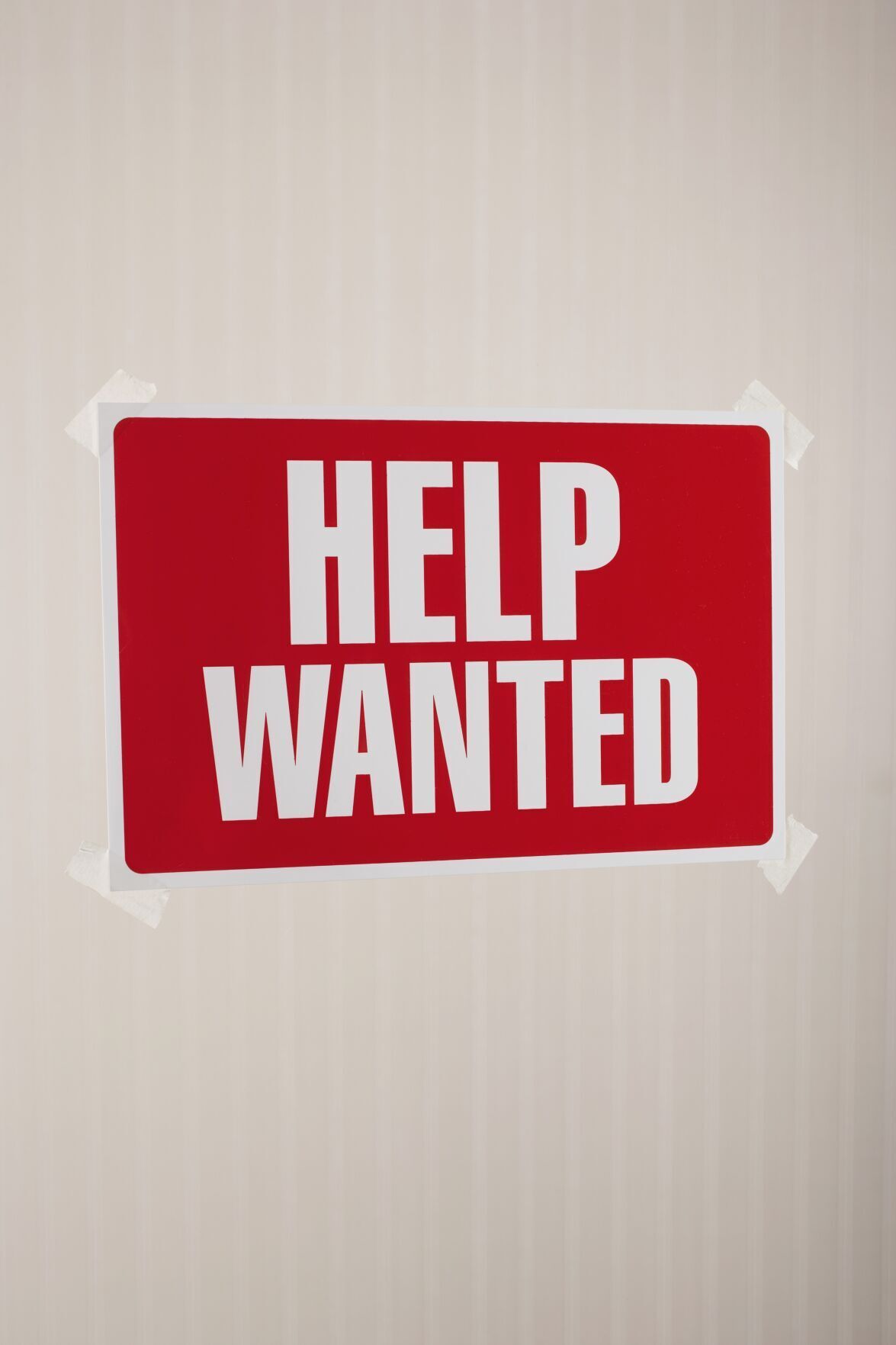 During the past four quarters, the top difficulty filling a vacancy employers gave was either a lack of applicants (summer 2020 and winter 2021) or a lack of qualified candidates (fall 2020 and spring 2021). 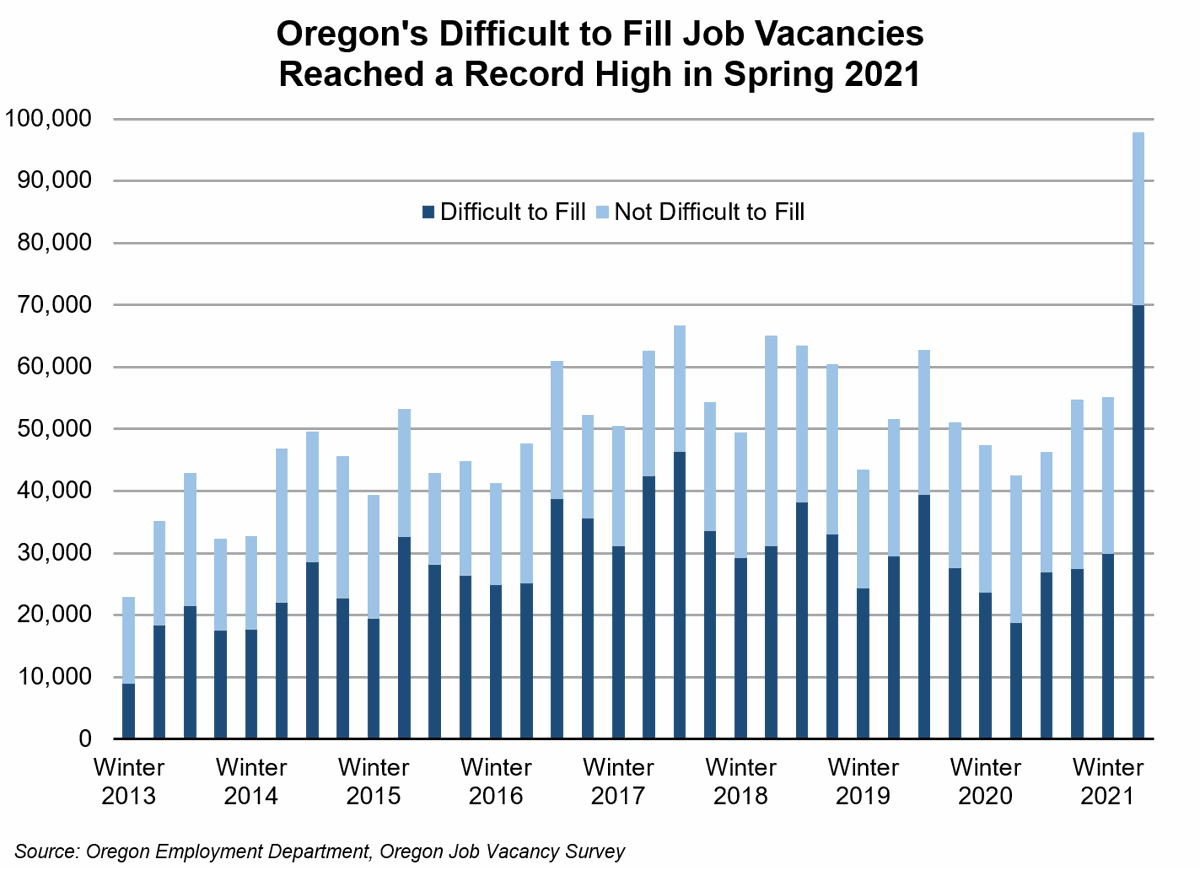 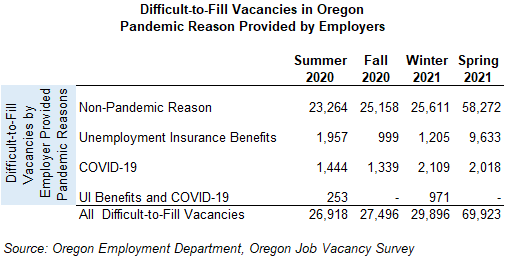 From the extreme job losses in March and April 2020 to the strong job growth of 2021, Oregon’s economy has rapidly changed over the past 17 months.

Between changing numbers of COVID-19 cases and pandemic-related government restrictions, Oregonians have been dealing with many unprecedented experiences. Oregon’s businesses are experiencing change too, and their hiring practices are no exception.

Each quarter, the Oregon Employment Department surveys private employers from all industries and areas of the state to ask about the job vacancies they are actively trying to fill. This unique survey offers us direct insight into how employers are feeling about hiring during this time. The survey is designed to identify employers’ vacancies, which ones they have a difficult time filling, and to get a business perspective on why these jobs may be going unfilled.

Why are Job Vacancies Difficult to Fill?

For each difficult-to-fill vacancy, employers are asked for open-ended responses about their primary challenge filling the opening. Responses are then categorized into 12 common reasons for difficulty. During the past four quarters, the top difficulty filling a vacancy employers gave was either a lack of applicants (summer 2020 and winter 2021) or a lack of qualified candidates (fall 2020 and spring 2021). These were the same top categories given by employers during the pre-pandemic period of 2019.

In a typical quarter, the 12 difficult-to-fill reasons work well to categorize the responses from employers. But these have not been typical quarters. With the pandemic and corresponding government interventions, employers began citing new pandemic-related reasons causing their vacancies to be difficult to fill. Pandemic reasons can be sorted into the traditional categories seen in the above chart, but to get a better look at what employers were saying about the pandemic and its effect on hiring, we created a customized categorization of reasons specific to the pandemic. The four new buckets are non-pandemic reason, unemployment insurance (UI) benefits, COVID-19, or both UI benefits and COVID-19 being cited.

Businesses were clearly saying that unemployment insurance benefits were increasingly making it difficult to fill their job vacancies over time. A closer look at the survey responses can show if differences in the types of job openings were contributing to the hard to fill nature.

In spring 2021, the typical job vacancy was a full-time, permanent position, regardless of whether or not the vacancy was difficult to fill, or whether or not the difficult-to-fill status was related to the pandemic. However, there were other differences that stuck out between the groups. Job vacancies that were not difficult to fill had a lower average hourly wage ($16.61) than those considered difficult to fill for a non-pandemic reason, which had a significantly higher average hourly wage of $19.50 and were more likely to require previous experience.

Because the job vacancies filled without difficulty and the difficult-to-fill for pandemic reasons look similar by wage and other indicators, the next step is to look for industry and occupation differences in the categories.

So there are not many differences between these vacancy types based on industry, occupation, or the major indicators. It seems like the sheer volume of hiring taking place right now has the biggest impact. As COVID-19 vaccines became widely available, pandemic-restrictions on business capacity and social distancing, and mask mandates relaxed, consumers began to consume more goods and services. This led to businesses needing to hire more workers at the same time as every other business in town.

During the pre-pandemic expansion, employers were saying very similar things about why their vacancies were difficult to fill, a lack of applicants or lack of qualified candidates. The phrase “no one wants to work anymore” was already a common reason given for why vacancies were difficult to fill. Now, with lack of applicants and lack of qualified candidates still being a major factor in hiring difficulties, the reason has expanded to become “no one wants to work anymore… because of high unemployment insurance benefits.”

Are High Unemployment Insurance Benefits Acting as a Disincentive for Working?

The federal Unemployment Insurance expansions will end on September 4, 2021. We will not know the full effect of ending these programs until months later. However, 26 states chose to decline federal assistance for their residents months ahead of the end date, because they believed the enhanced benefits were keeping the unemployed from looking for work. In the months since these states prematurely ended the benefits, researchers have been able to study the effects on employment.

Twenty-six states withdrew from the federal assistance in June and July 2021, ahead of September 4th. Most cut off all federal benefits, but some only ended the extra $300 weekly payment. A new paper authored by economists at Columbia University, Harvard University, the University of Massachusetts Amherst, and the University of Toronto found that unemployment insurance benefits aren’t playing a big role in hiring challenges. States that ended federal benefits early did see larger job gains among the unemployed as compared to those that didn’t end benefits early. However, only 1 in 8 unemployed individuals who were cut off from benefits had found a job by the first week of August. Most people who lost benefits were unable to find a job.

Because there were more people who lost benefits without any resulting job income, on average households cut their weekly spending by 20%. This resulted in those states seeing a $2 billion reduction in consumer spending from June through the first week of August. While the study found that cutting benefits had a marginal positive effect on employment, the larger effects were a reduction in quality of life for those who lost the federal benefits and did not find a job, most of whom were low-income.

The research really suggests that enhanced unemployment benefits are not a complete explanation for the hiring challenges employers are facing. Other reasons workers may not be returning to work could include the lack of adequate childcare or reasonable health concerns during a deadly pandemic. Workers may have relocated away from jobs or changed industries, and some workers may have retired early and don’t plan to return to work. The rise in the COVID Delta variant threatens the future of the recovery too, as COVID is still a major concern.

What can Employers do to Attract and Retain Workers?

As federal enhanced Unemployment Insurance benefits come to an end, employers may expect a sharp increase in job applications. Research indicates there will be some increase in employment from this, but there are still other barriers in place to people seeking employment.

An article by State Employment Economist Gail Krumenauer discusses in detail recruitment and retention in a tight labor market. She lays out a number of different ways employers have responded to tight labor market conditions. These include raising wages, adding benefits and perks, relaxing experience requirements, and ramping up recruitment intensity. Read more in the full article here.

Business: Recruiting and retention in a tight labor market

Oregon’s economy is continuing to recover and change rapidly.

Anna Johnson is a senior economic analyst with the Oregon Employment Department. She may be reached at 503-991-2110, or at anna.l.johnson@oregon.gov.