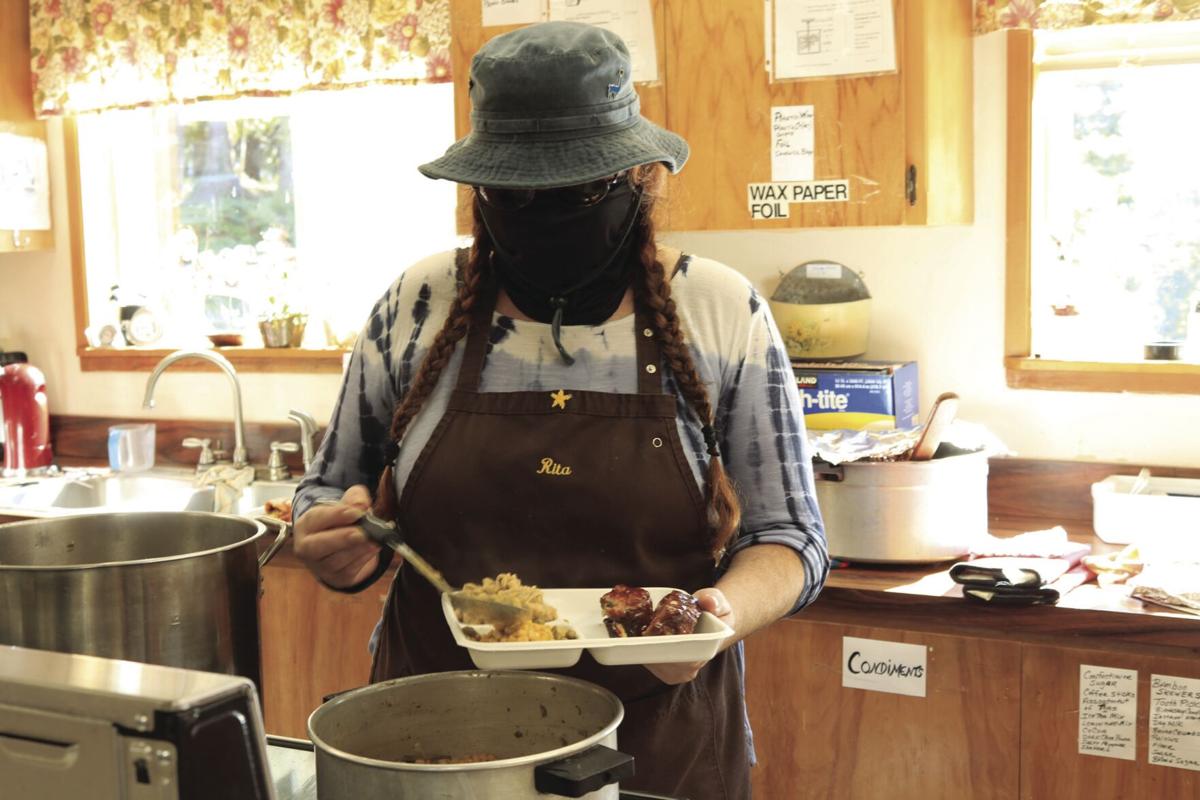 A volunteer at St. Timothy's Episcopal Church prepares a plate of food for a guest to the church's community kitchen. 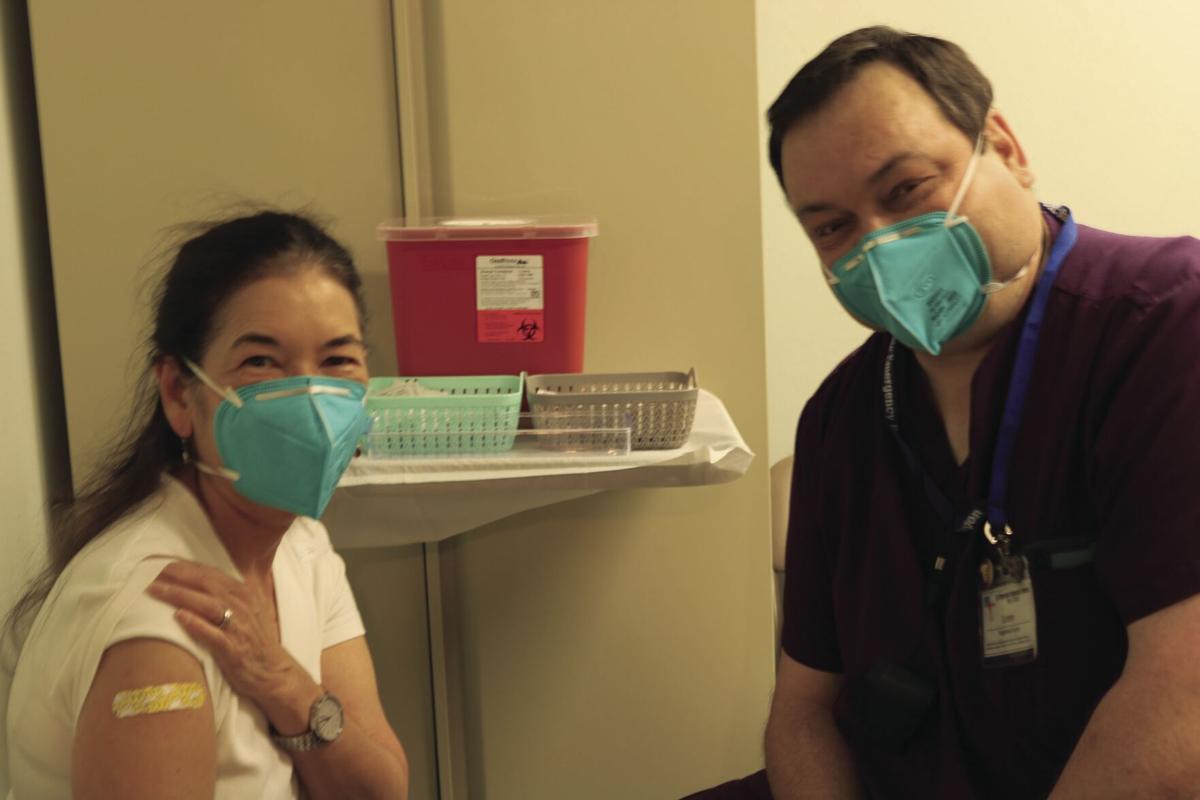 The R.T. Rev., Bishop of the Episcopal Diocese of Oregon, Diana Akiyama, receives her COVID vaccination from Loren Farmer. 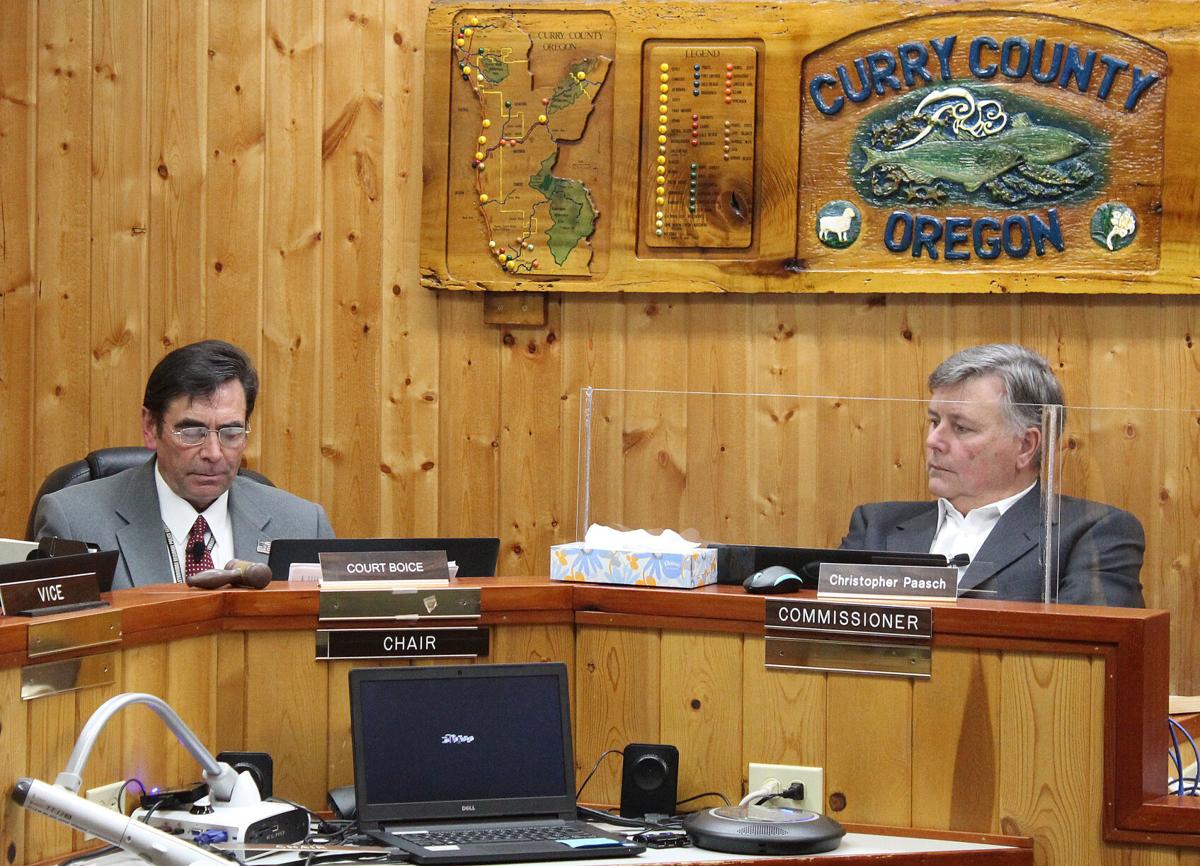 County Commissioners Court Boice, left, and Chris Paasch clashed frequently in 2021, but the duo still managed to work together. 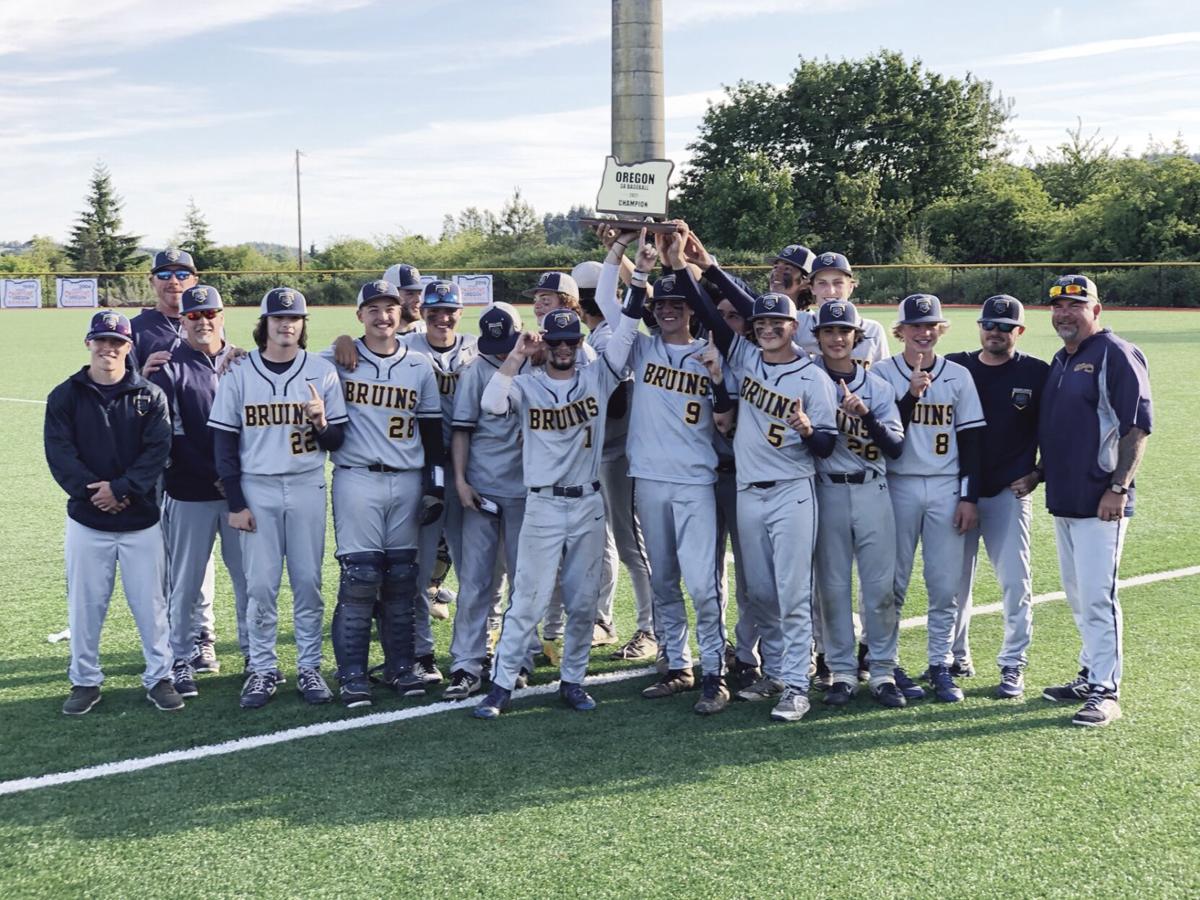 The Brookings-Harbor baseball team capped a 16-0 season with a state championship.

A volunteer at St. Timothy's Episcopal Church prepares a plate of food for a guest to the church's community kitchen.

The R.T. Rev., Bishop of the Episcopal Diocese of Oregon, Diana Akiyama, receives her COVID vaccination from Loren Farmer.

County Commissioners Court Boice, left, and Chris Paasch clashed frequently in 2021, but the duo still managed to work together.

The Brookings-Harbor baseball team capped a 16-0 season with a state championship.

A lot of news took place in 2021 as COVID continued to plague the community, county commissioners fought over almost every issue and Brookings even crowned a state champion.

But one story took hold in Brookings and refused to let go - a debate over whether nonprofits and churches should be able to feed the hungry without governmental interference.

Brookings made national news this year when benevolent kitchens run by community churches were told to limit those operations to two days a week and three hours or fewer per day. The controversy goes back nearly two years to when four of the churches that served charitable meals resulted in an increase of calls for police service. A petition citing safety concerns was also signed by 29 residents who live near St. Timothy’s Episcopal Church - which was serving meals from its kitchen four days a week. Fast forward to a June city-sponsored community workshop that was held to address those concerns, and the issue got more complicated when the Oregon Health Authority classified community kitchens as restaurants - a designation prohibited within residential neighborhoods. On Oct. 25, the council voted to modify the ordinance that prohibited churches from operating charitable kitchens, but those who opposed the move stated the ordinance was on the books but applied to traditional revenue-generating restaurants, and accused the city of placing unconstitutional restrictions on their right to minister and practice their faith. Nearly all of the Brookings benevolent kitchens have since applied for and obtained a conditional use permit, and the city council followed through on its promise to waive the $3,012 permitting fee for doing so. St. Tim’s, however, has not applied for the permit and continues to open its kitchen 4 days a week. Father Bernie Lindley with St. Tim’s has stated that constitutional protections afforded to religion, including ministering to those in need, prohibits municipalities from imposing restrictions on how often they operate. The ordinance isn’t scheduled to be enforced until at least January 26, but if St. Tim’s receives a violation notice, benevolent kitchens may continue to be Curry County’s top news story going into 2022, as Lindley has stated he is prepared to file a federal complaint in court.

COVID rates in Curry County trended below most regions of the state in 2021 - with 1,983 reported cases and 40 deaths - but rates failed to decline enough to lift indoor mask requirements. By the end of 2021,The Centers for Disease Control deemed residents of Curry County as facing a ‘substantial risk’ of contracting COVID, though surrounding counties fared worse and were designated as ‘high risk.’ Lincoln County is currently the only other coastline community that matches Curry’s risk level. Moving into 2022, the recent Omicron variant could push risk levels upward, and on Dec. 17, Oregon Gov. Kate Brown urged Oregonians to vaccinate against the virus of what she called “an Omicron-fueled surge of positivity rates.” According to the CDC, 55.4% of Curry County residents are fully vaccinated. Oregon Health Authority data also shows that between December 23-26, Curry County’s average daily rate of COVID-positive cases per 100,000 people was 8.9%, with a 7-day average of two cases of COVID each day. Available ICU beds in Curry currently sit at 8%, and 13% of non-ICU beds are open.

Moving into the new year, Oregonians may also face an indefinite indoor mask mandate, which would replace the current 180-day temporary rule that the state has operated under. The rule generally applies to all businesses in Oregon, and the OHA is proposing a civil penalty of $500 per person per day for non-compliance with the rule.

2021 started very well from Curry County Commissioner Court Boice. During the first meeting of the year, Boice was elected chairman of the board of commissioners.

But despite the start, Boice continued to stuggle to gain support in many of the policies he wanted to enact. On a regular basis, Boice and Commissioner Chris Paasch battled publicly over policy disagreements.

While Boice won many of the battles politically, the conflict took a toll. Midway through the year, Boice stepped down as chair after another dispute over parking spots that Boice felt should be opened to the public.

Commissioner John Herzog stepped in as chair while Boice continued to serve as commissioner.

During the middle of the COVID-19 pandemic, the Curry County Board of Commissioners caused a lot of controversy when the board voted to have the Oregon Health Authority take over public health duties in the county.

when the decision was made in April, Curry County had only one employee working in the public health authority, Sherrie Ward public health administrator, and the demands of the COVID-19 pandemic have made it difficult, if not impossible, to keep up.

The 2-1 vote was met with controversy.

"This is the worst decision this board will make," Commissioner Chris Paasch said after voting no.

In a critical review of the arresting officers and district court, on June 9 the Oregon Court of Appeals reversed a felony conviction of Jennifer Gayman - a 50-year-old disabled woman who was arrested by Brookings police officers in 2018 for eluding police on a mobility scooter. In November of 2018, two Brookings police issued a citation to Gayman for driving her scooter on the sidewalk and not wearing a helmet. Gayman was also told she could not drive her scooter home, as she still did not have a helmet. Gayman took her citation and drove off anyway, and police pursued her in a low-speed chase with sirens and lights and requested backup. Once Gayman arrived at her home, police arrested her inside her garage. Two and half years after her arrest, the state court of appeals reversed Gayman’s conviction with a June 9 ruling, stating that the scooter was a motor assisted wheelchair and not a motor vehicle. According to the ruling, a person must be operating a motor vehicle in order to be charged with eluding or fleeing a police officer. On Oct. 19, the Brookings City Council had to reallocate $25,500 in contingency funds to help pay for a 23 percent insurance cost increase for the 2021-2022 fiscal year due to the court's decision.

The Brookings-Harbor baseball team achieved something few ever do - perfection.

In the shortened spring season, Brookings-Harbor went 16-0 and cruised to the state championship with a, 11-2 victory over Yamhill Carlton.

The state title marked a school-first in baseball, and was only the team’s second overall appearance in a state final game — the first was in 1995

In April, Brookings Mayor Jake Pieper went on Facebook to announce hwe was stepping down as mayor.

Pieper's decision came after the city council criticized him for writing a letter in support of Project Turnkey.

In his resignation announcement, Pieper said he could not continue as mayor after losing the support of the council.

8 - Housing continues to be a major problem

A lack of inventory in the housing market impacted real estate prices, people's ability to accept jobs, and municipal approaches to dealing with the crisis. According to Multiple Listing Service numbers in October, sale prices of Curry County homes increased 5.2% in October compared to the year prior, in large part because very few homes are listed each month. In July, the Curry County Board of Commissioners began accepting applications for accessory dwelling units to increase year-round rental opportunities. In Brookings, the planning commission also changed its zoning language regarding workforce housing to clear existing restrictions for ADU development in residential zones, and approved two subdivisions: A 20-lot subdivision known as Seacrest Estates in the East Harris Heights neighborhood; a four-lot subdivision called Tide Pool Estates in the Dawson Tract area.

One day after its lease with the City of Brookings expired, Radio Station KCIW went dark on Nov. 1, then returned to the airwaves Dec. 5. KCIW went off the air after the Brookings City Council struck down a request for a 90-day extension to the radio group to use a city-owned radio communications tower. KCIW had installed and maintained a radio broadcast antenna on the city’s tower since 2014, but in 2019 that arrangement became conditional as city officials expressed disappointment with KCIW’s emergency broadcasting capabilities, as well as interest in working with another company that could bring in more revenue. KCIW broadcasts on FM 100.7.

10 - Treasurer a concern in Curry County

At the beginning of the year, finding a county treasurer seemed like a difficult task.

The problems began when Terry Hanscam, who won election to the seat, announced he would not take the seat. By the end of January, the board of commissioners appointed Douglas Baker to the job, but he also resigned with a few days.

A few days later, commissioners voted to hire David Barnes as treasurer. Barnes has kept the role since, but has not indicated if he intends to run for election.