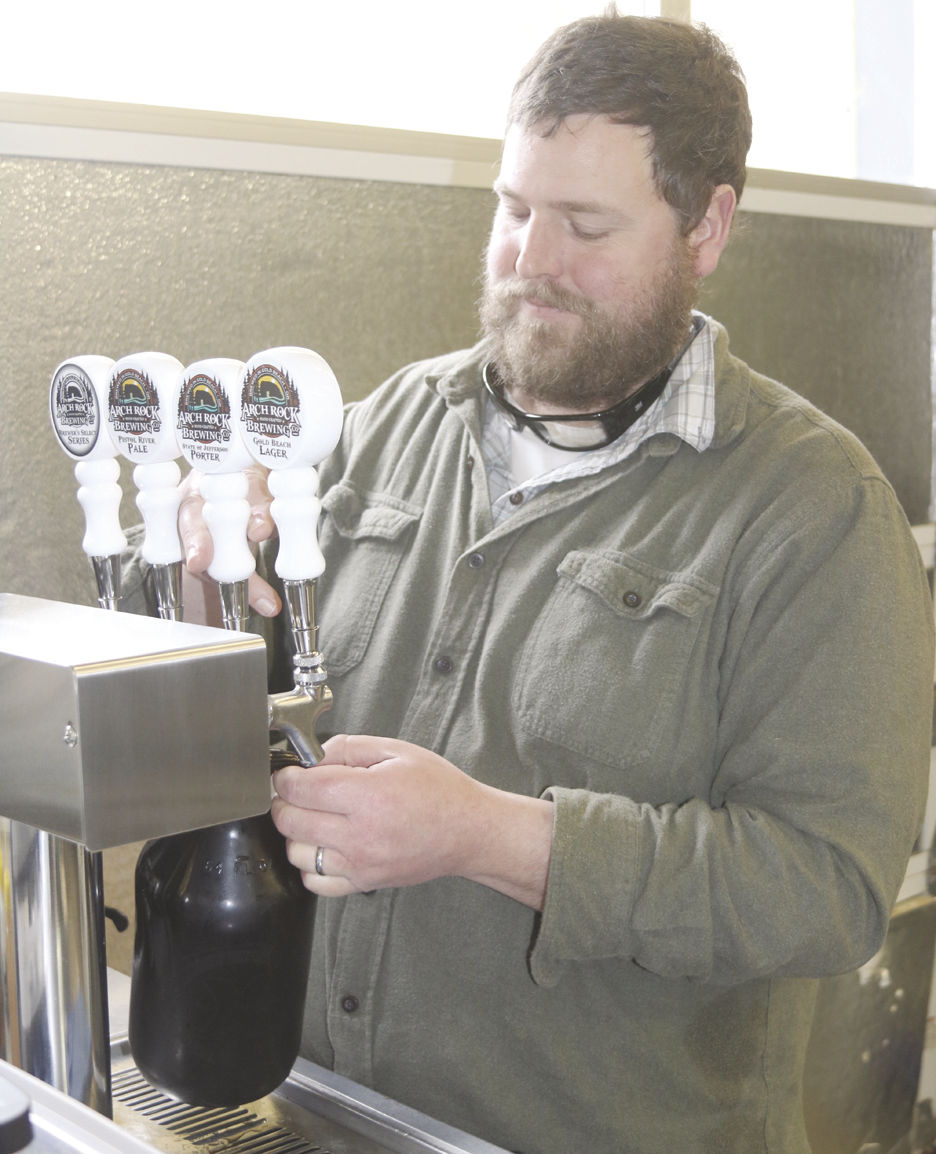 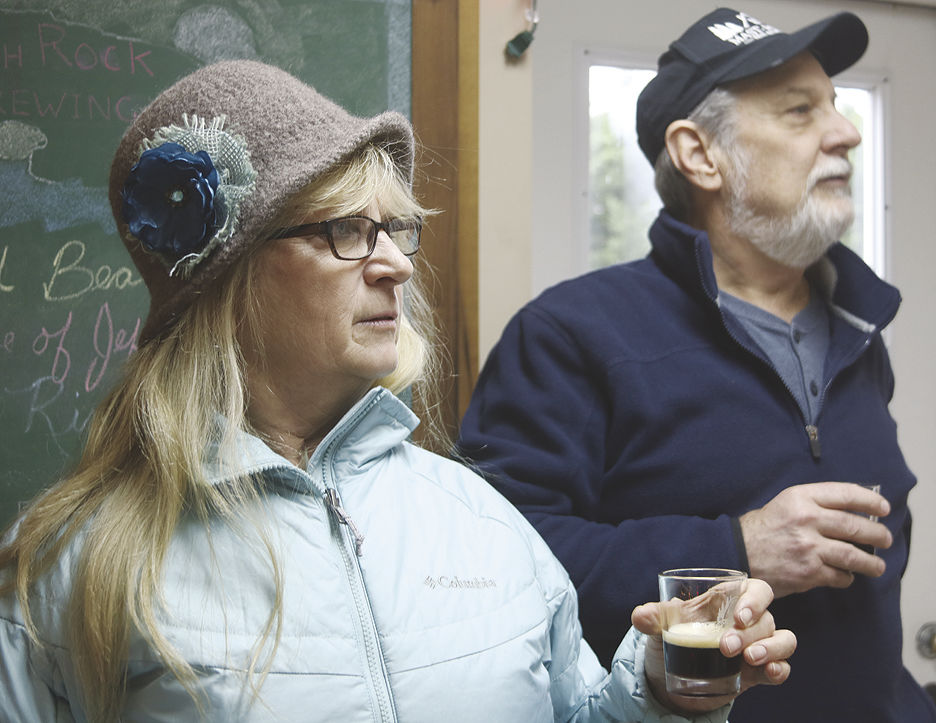 Randy Brazelton and Dianne Berry drove up from Brookings to refill their growlers at Arch Rock Brewing.

Randy Brazelton and Dianne Berry drove up from Brookings to refill their growlers at Arch Rock Brewing.

Looking around the miniature tasting room, you notice the awards lining the walls. Since opening in January 2013, Arch Rock Brewing Co. has landed 10 medals, half of them gold, and a championship award in the category of Very Small Brewing Company.

That might be why getting their growlers filled here on this soggy day is a high priority for the walk-in customers.

Come summertime, the tasting room crowd - sometimes numbering nearly a dozen people - spills into the taproom. Soon, a new tasting room just up the street will ease the overflow seen during even the worst of weather days.

Larry Brennan decided during a late-2000s decline in the construction industry that he needed a different occupation. At the time, there weren’t many breweries here on the coast. He placed an ad in ProBrewer magazine to find a professional brewmaster and hired James Smith.

Smith and wife Kristen arrived in 2012 from Victor, Idaho - the summer before Arch Rock opened - and began helping the Brennans convert their former cabinet shop into a 15-barrel brewhouse.

“It’s been a challenge, but fun,” said James Smith. “I did all the plumbing and tank installation, everything except the electrical.”

Two 30-barrel fermenters and a 30-barrel bright tank make up the bulk of the brewery’s equipment. The company is owned by the Brennans and the Smiths, who employ sales and distribution manager Gabe Hornsby, plus three others on a seasonal basis.

Smith has been brewing professionally since 2004. He and his wife both had been working at Grand Teton Brewing Co., with James the cellar manager and Kristen the quality control manager.

Before moving to Grand Teton to be with Kristen, James Smith had been the brewmaster for five years at Uinta Brewing in Salt Lake City.

Smith first learned the brewing craft in 1999 when he bought a brew kit for one of his friends. They both started making beers and experimenting.

Later, he worked for Art’s Brewing Supply in Salt Lake City, where he added to his knowledge of the industry, before being hired by Uinta.

The Gold Beach brewery offers three beers on a regular basis, and rotates a fourth beer on a single-batch basis - called a Brewer’s Select series - whenever tank space allows. “That’s when I get to play around as the brewer,” Smith said.

Those select brews include Apricot Saison and Trident Black IPA, both of which won bronze medals in 2017. (“It’s harder to get the fruity beers to clarify,” Smith said of the apricot.)

The specialty brew on this visit is He-Man Imperial Stout, which Smith describes as having “higher alcohol (9.5%) and being bigger all around” than the oatmeal stout he brewed last year.

In the regular lineup of brews is Gold Beach Lager, a German-style that’s light, crisp and refreshing. Pistol River Pale is more like an IPA than a pale ale. It’s described as hop-forward, but well balanced and less bitter.

State of Jefferson Porter is robust, with hints of aromas and flavors of chocolate and mocha. The porter was the first beer made at the brewery. It put them on the map with a gold medal that year and has earned additional medals over the years.

On this particular day, Randy Brazelton has driven up from Brookings through an “atmospheric river” to fill his growlers. “It’s been a couple of years now that I’ve been getting into the craft beers,” said Brazelton. “This is one of my favorites: not just the beer, but the people.”

Brazelton’s friend, Dianne Berry, is from Michigan. She volunteers at a beer fest there each year, so she’s a big brew fan. As for Arch Rock, “I love it,” said Berry. “The friendly, professional staff brings us back. We travel a long way to have this fine experience. This is a nice social hub.”

Meanwhile, Smith is answering questions about the brewing process while pouring samples for his guests. He compares the process to baking.

“Sugars come from the malted barley, and hops are added for flavor and bitterness. Hops are fairly new to the process, and have only been used for the last 400 to 500 years.”

“How do you come up with your different formulas?” asks Berry. “Do you make small batches to try them out?”

“I’ll do some product research. I’ll find a style I want to make and try some other beers in that style, and get an idea in my head of what I want it to taste like.

“I build the recipes out of percentages. Knowing the brewing system, that’s what helps and guides me for the hops ratios. The grain is kind of a two-part system for me. Grain works pretty good (for making small batches and scaling up), but hops don’t scale up.”

“What’s the difference between your lager and pale ale?” asks Berry.

“The lager uses a lager yeast and is fermented colder, at 50°F, and aged longer,” Smith said. “Ale ferments in the 60°F range. The fermenters are temperature-controlled.”

Elizabeth McKinney of Gold Beach drops by to refill her growlers. “I bought a growler from another brewer. Do I have to take it back to where I bought it to refill?” she asks.

The shop also offers “crowlers” for $7, which are aluminum cans with a custom-painted image by Brookings artist Spencer Reynolds. The cans are filled with any of the beers available.

“I love their beer,” said McKinney, who chose Pistol River Pale Ale for three of her growlers and the Gold Beach lager for another one.

McKinney presented her punch card, which grants a free refill after 10 punches.

The growlers will stay carbonated for about a week if unopened. If opened, Smith advises drinking them within three days.

After trying all of the beers and talking with the brewer about everything from beer making to hockey and art, Brazelton and Berry decide to fill their two growlers with the lager and the porter. The couple also buys a four-pack of crowlers for Berry to take back to Michigan.

For restaurants, bars and parties, the brewery’s beer is available in various-size kegs. Its top distibutor is right next door, at Hunter Creek Bar and Grill.

Arch Rock beers are widely available at bars and restaurants from Brookings to Lincoln City, and from Ashland to Roseburg, Eugene, Portland and Bend statewide, according to Hornsby. They’ve recently added certain locations in northern California along the I-5 corridor.

Hornsby has been with the company since October 2013: “The joke goes that Arch Rock opened and nine months later, I arrived.

“We’ve continued to grow production and distribution throughout the state, while maintaining a small, hard-working crew of friends much like family,” Hornsby said.

“We’ve dedicated our lives to our craft, as well as our community, annually helping local nonprofits, the city of Gold Beach and our county, as well as other nonprofit donations all over Oregon.

“We are continuing plans to move forward, with some fun ideas to keep our growth steady and down to earth by staying true to ourselves and our vision.”