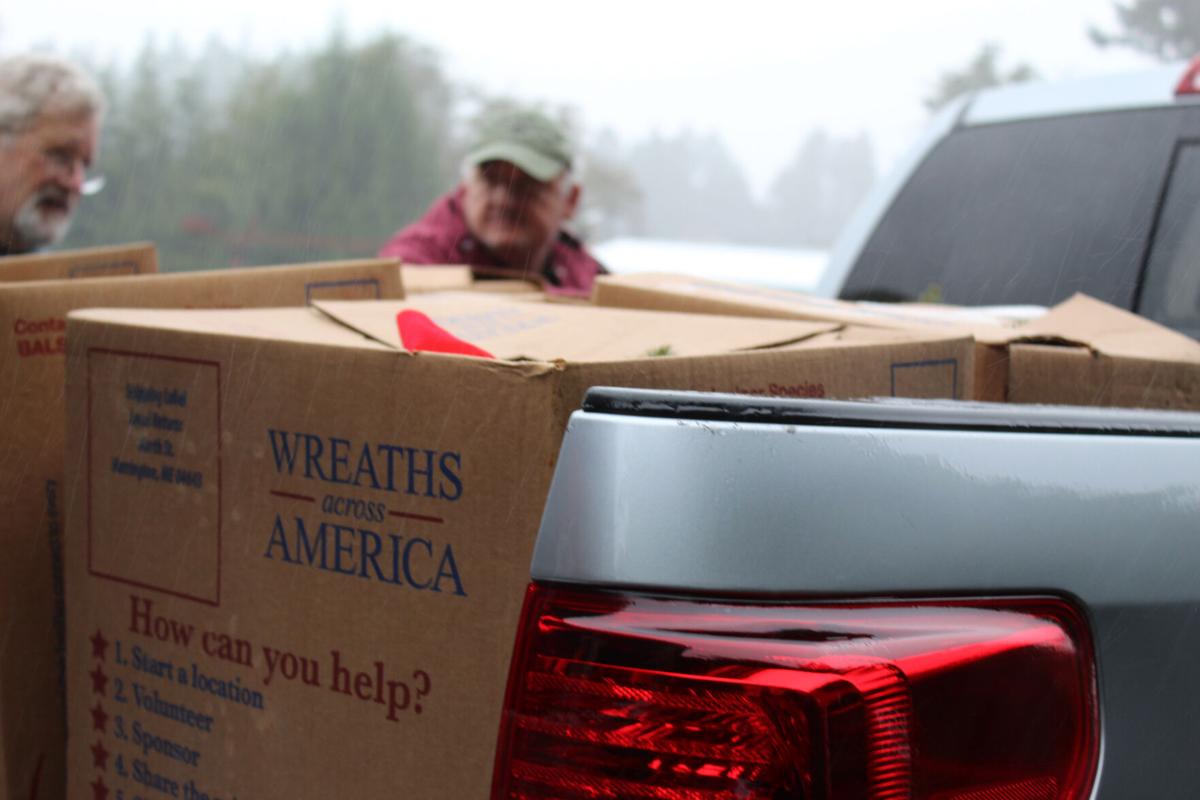 Volunteers in Brookings unloaded 39 boxes of memorial wreaths into pickups Tuesday to move to the W.J. Ward Memorial Cemetery for the city’s first Wreaths Across America Ceremony. 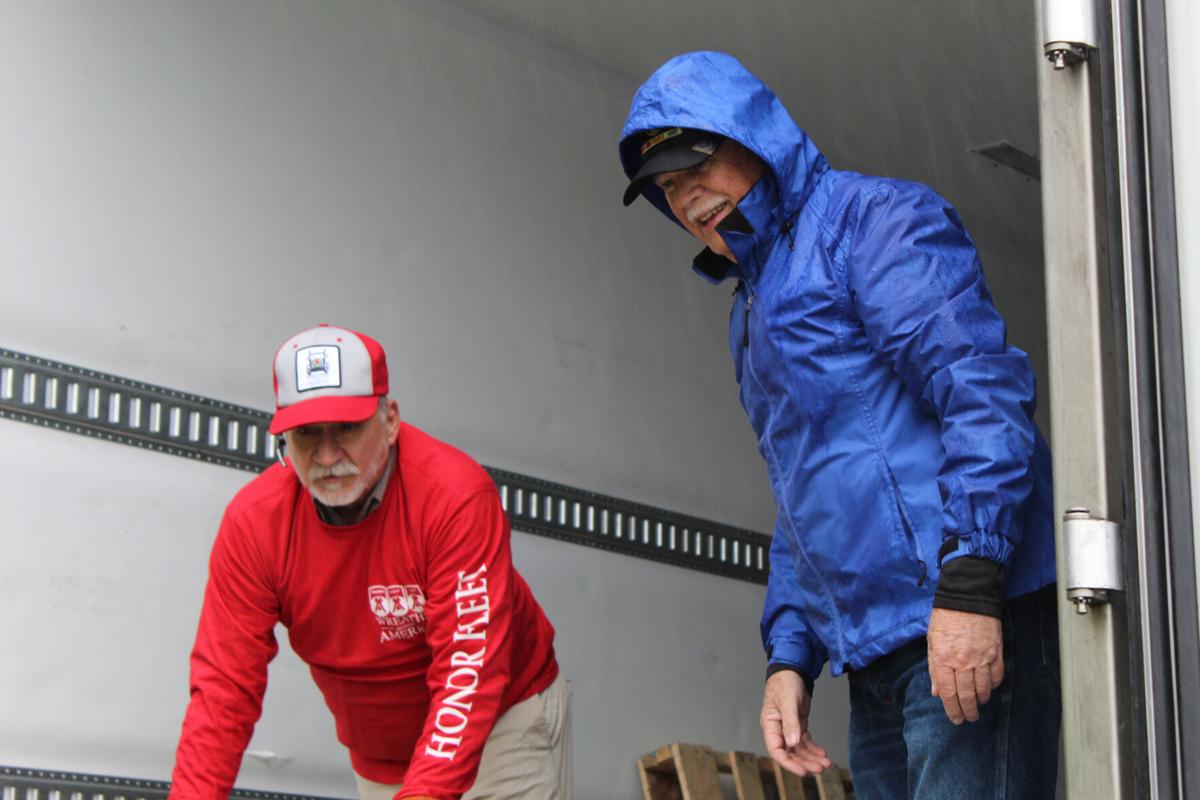 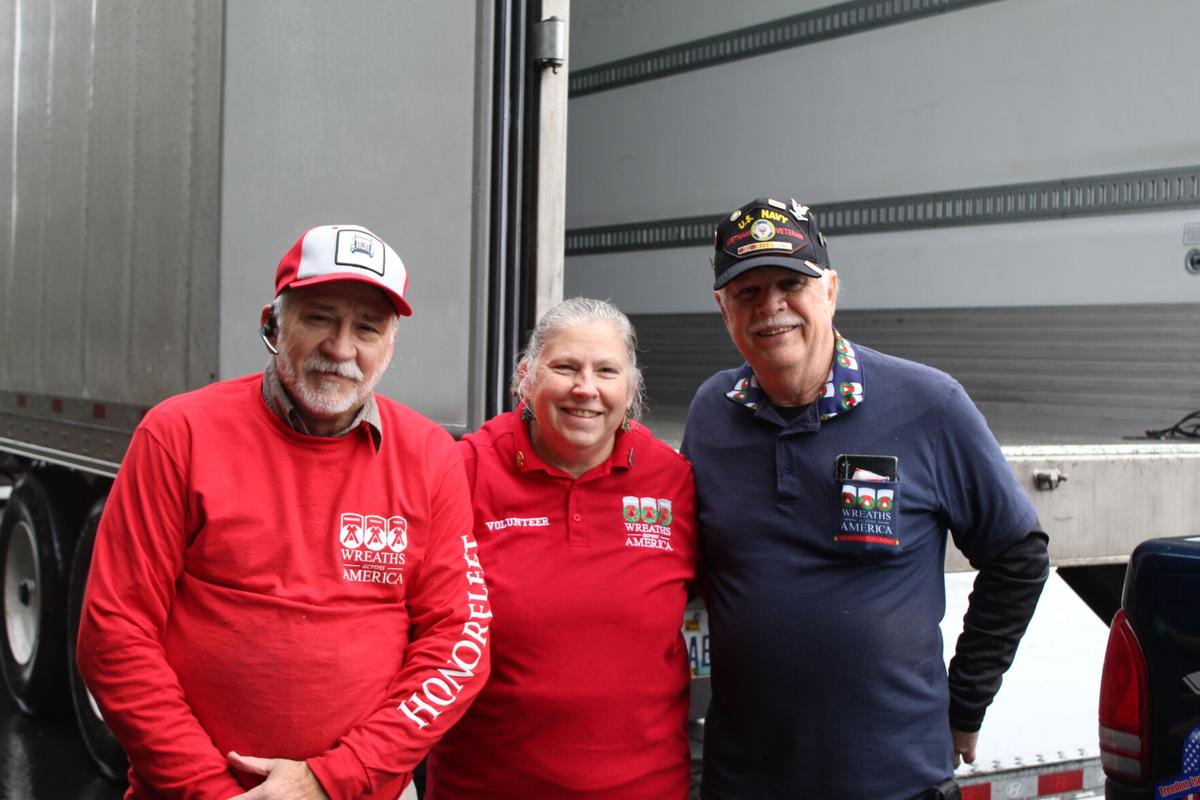 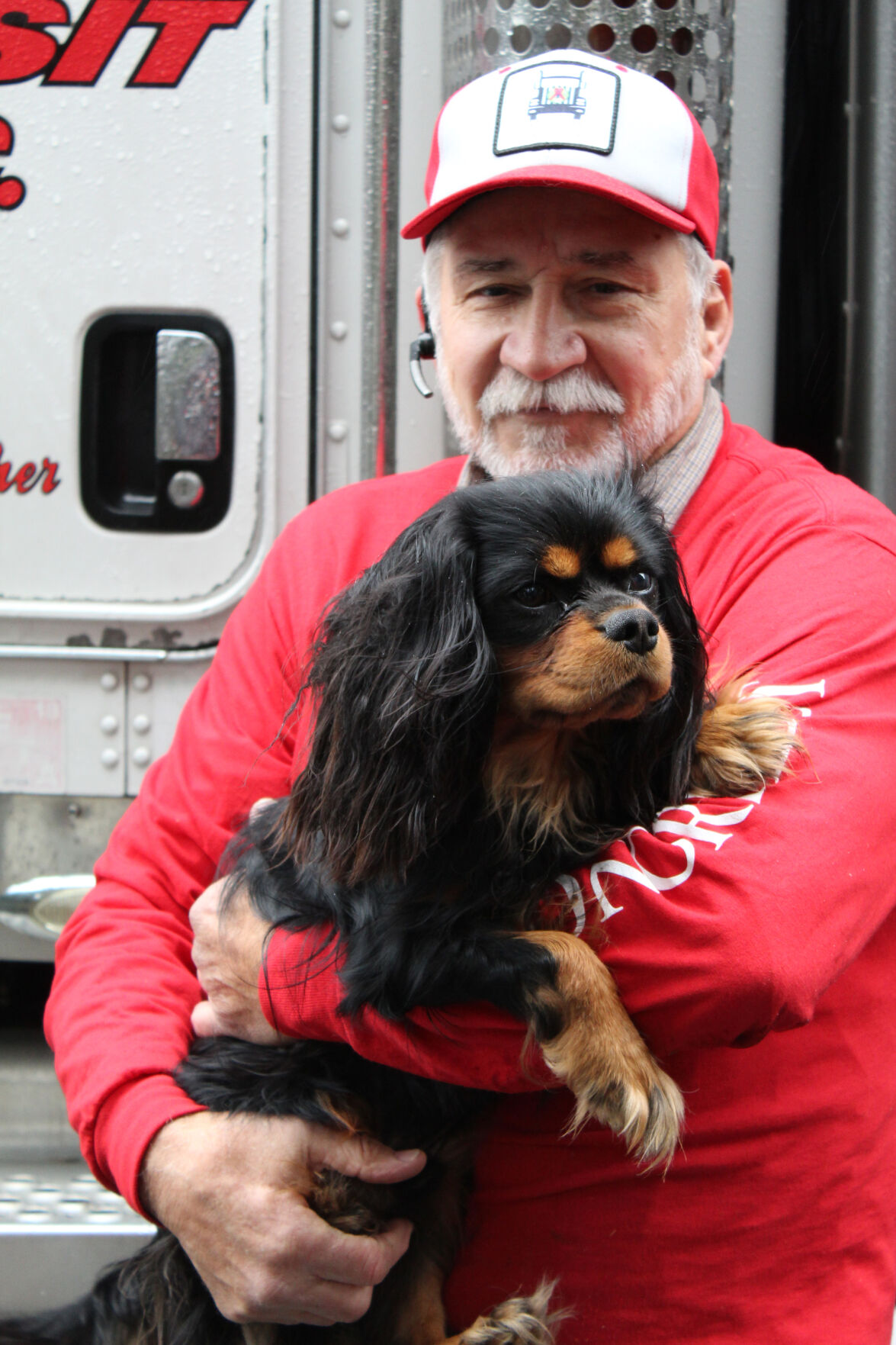 Robert Graves’ dog, Christopher Robin, joined him on his journey to deliver wreaths across western Washington and Oregon. Starting in Georgia, Graves traveled across the country and picked up half a truckload of wreaths in Fife, Washington.

Volunteers in Brookings unloaded 39 boxes of memorial wreaths into pickups Tuesday to move to the W.J. Ward Memorial Cemetery for the city’s first Wreaths Across America Ceremony.

Robert Graves’ dog, Christopher Robin, joined him on his journey to deliver wreaths across western Washington and Oregon. Starting in Georgia, Graves traveled across the country and picked up half a truckload of wreaths in Fife, Washington.

As a truck driver, Robert Graves has plenty of time to think about what it means to live in America.

He crisscrosses the country all the time, and this week was no exception. But this time, he — and his puppy, Christopher Robin, who joined him in the cab of his truck along the way — was volunteering his time to deliver boxes upon boxes of wreaths.

“America is a wonderful, mysterious place, if you take the time to contemplate it,” Graves said.

On a soggy Tuesday morning, Graves had come all the way from his home in Georgia to take part in a nationwide event that’s found a home in Brookings.

He and a small group of volunteers from the Brookings chapter of the Vietnam Veterans of America unloaded 39 boxes from a semi-trailer and into pick-up trucks to bring them to their final resting place, the W.J. Ward Memorial Cemetery.

The wreaths are a key component of the annual Wreaths Across America effort, a day intended to “remember, honor and teach” about veterans across the country with wreath-laying ceremonies scheduled in tandem with one at the Arlington National Cemetery in Virginia.

This year, Brookings is joining the list of over 2,000 cities holding similar ceremonies. Each year, the goal is to place a wreath as a symbol of honor on the headstone of every military veteran.

Don Bemis, a Vietnam War veteran, and Debbie Salzman organized the portion of the event to be held in Brookings.

“I want to honor veterans in the best way I can,” Bemis said.

The pair had been involved in the events while they lived in Carson City, Nevada. But when they moved to Brookings, they found that the city didn’t have its own version of the national event.

So, after a few years living in the area, they launched a local effort this year. With the help of volunteers from the Vietnam Veterans of America chapter, they got to work organizing sponsorships for wreaths and planning a local ceremony.

The reason he stays involved in the event is simple, Bemis said.

Graves, the truck driver, didn’t serve in the military, but some of his family has. He’s wanted to get involved with the event for several years, but hasn’t had the time and resources to do it until now.

“I knew about it by reading about it in trucking publications,” Graves said.

Since he’d first heard about driving for Wreaths Across America, he met other truck drivers who’d participated. One had a handful of wreath-shaped decals on the side of his truck, from each year he’d delivered wreaths.

Talking to that driver inspired him to sign up for a delivery route himself, Graves said. He had options of routes, between the northwest and Arizona.

He chose the route that began with a pickup in Fife, Washington. His first delivery of wreaths was to Lynden, Washington, just a stone’s throw from the Canadian border along Interstate 5. After his delivery in Brookings, he was headed to his last stop in Lakeview, east of Klamath Falls.

“This is my first year, but it won’t be my last,” Graves said. “It’s just amazing, the scope of this.”

At one stop in Ocean Park, Washington, Graves took a walk through a cemetery that will soon be filled with wreaths. With a bit of time in his schedule before his next delivery was due, he’d stopped to pay his respects to the veterans buried there.

He came across one gravesite that moved him to tears: That of a 19-year-old who was killed in the Vietnam War.

“The sacrifice that this represents…,” Graves said, adding that he’d been thinking of the families left behind by those casualties. “You just think about all the misery that all those markers represent.”

The local ceremony will take place at the cemetery at 9:00 a.m. Saturday, simultaneous with the ceremony in Arlington, Virginia. Wreaths will be laid on headstones following the ceremony.