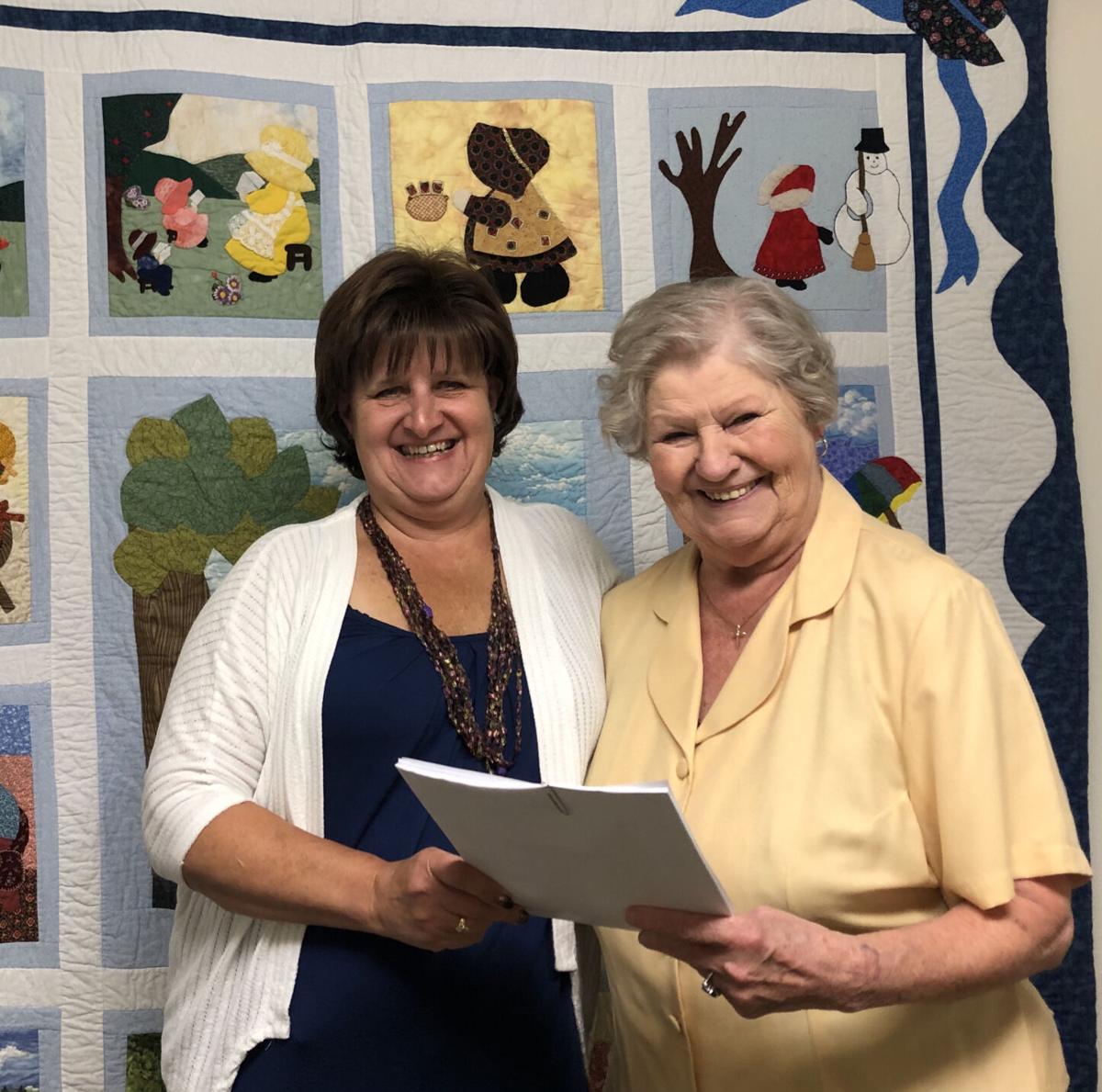 Executive Director Jackalene Antunes (left) and Jeri Honeycutt (right) after the title for Wally’s House was transferred to the nonprofit. 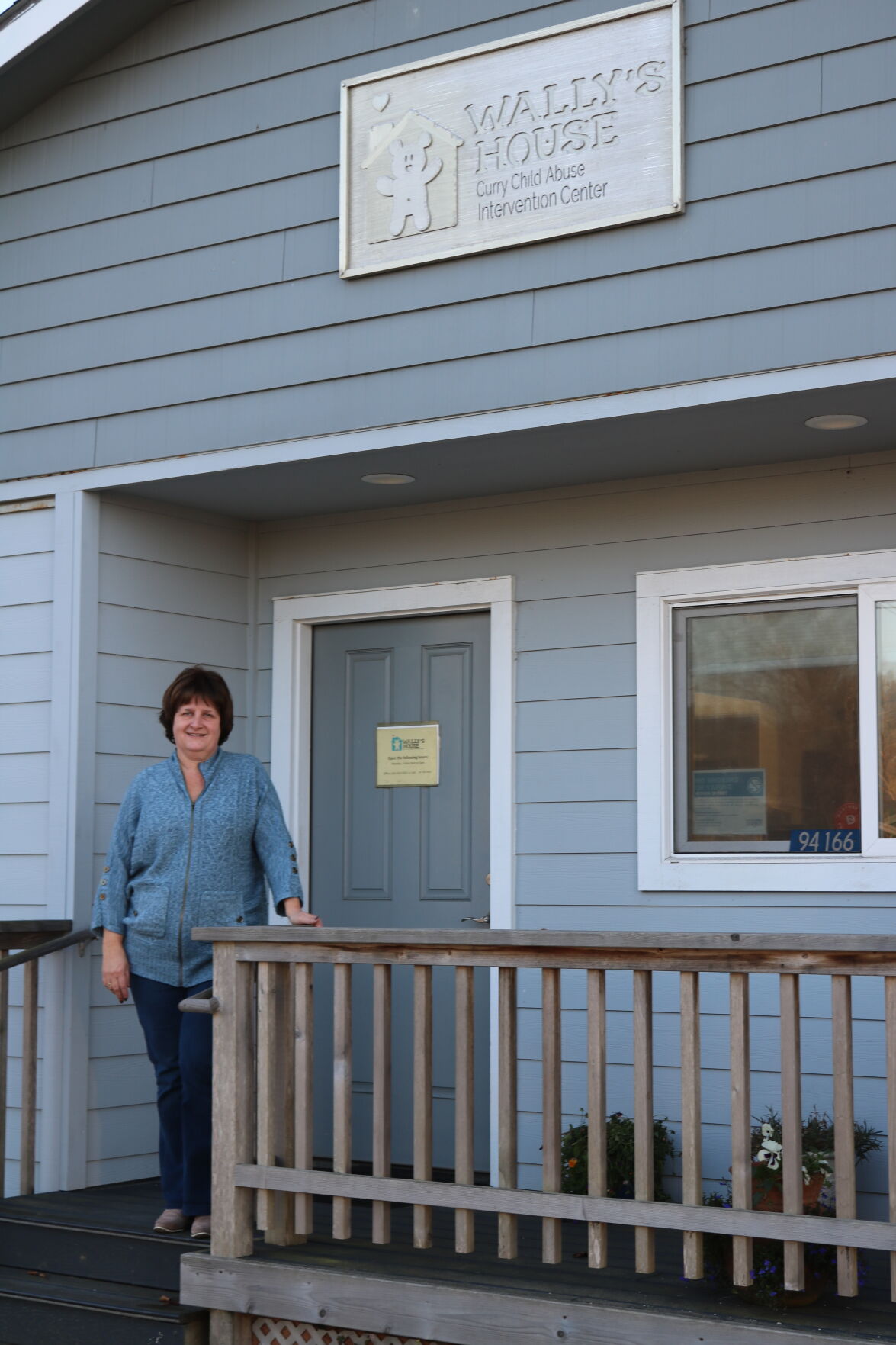 Executive Director Jackalene Antunes stands on the front porch of Wally’s House in Gold Beach, which serves as a Child Abuse Intervention Center for all of Curry County. 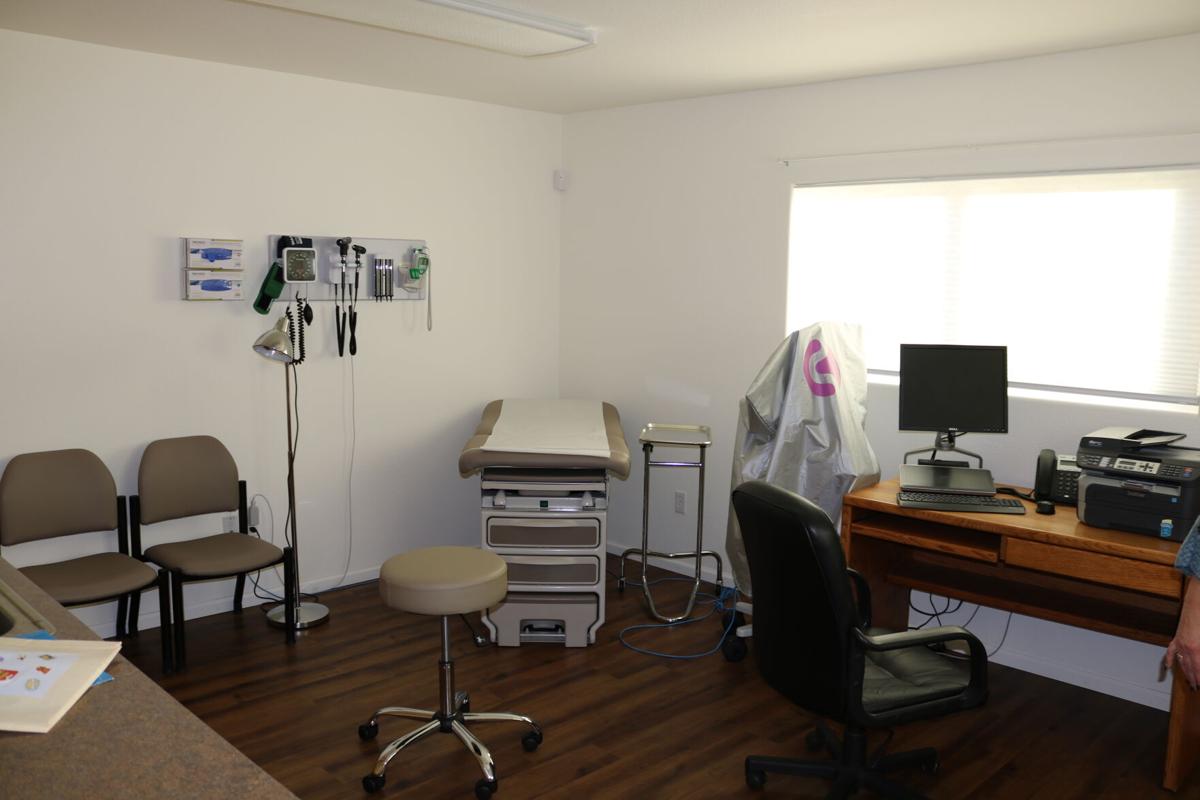 The medical exam room at Wally’s House makes it easy to provide all the services needed under one roof for child abuse intervention. 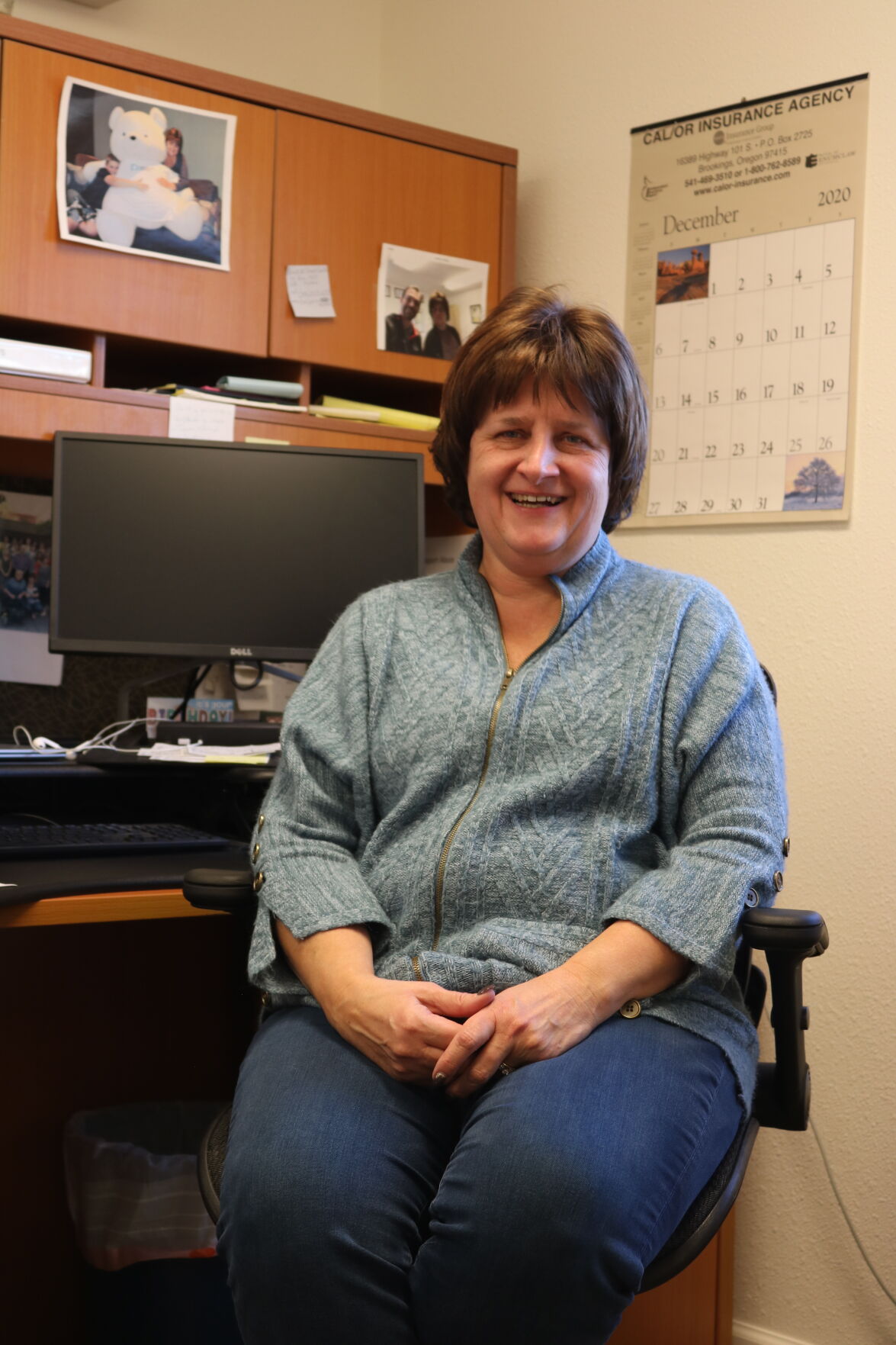 Executive Director Jackalene Antunes inspires confidence in children that an adult is listening and they can talk to her about anything.

Executive Director Jackalene Antunes (left) and Jeri Honeycutt (right) after the title for Wally’s House was transferred to the nonprofit.

Executive Director Jackalene Antunes stands on the front porch of Wally’s House in Gold Beach, which serves as a Child Abuse Intervention Center for all of Curry County.

The medical exam room at Wally’s House makes it easy to provide all the services needed under one roof for child abuse intervention.

Executive Director Jackalene Antunes inspires confidence in children that an adult is listening and they can talk to her about anything.

The Child Abuse Intervention Center for Curry County, Wally’s House, has been gifted full title to and independent ownership of its facility in Gold Beach.

Due to the generosity of benefactress Jeri Honeycutt, Wally’s House got its start as an independent 501(c)3 nonprofit organization in August 2016. Honeycutt donated the use of a single-family home in Gold Beach to serve as a facility focused on the reduction of trauma to children who had suffered abuse. It was named Wally’s House in remembrance of her loving husband, Wally Honeycutt.

No longer having to be shuffled from the basement of the courthouse to the sheriff’s department, to medical professionals and to social service representatives, children would instead find themselves in a quiet home-like atmosphere with comfortable furnishings, snacks and juice, books and toys. Thanks to state-of-the-art secure video recording, the children need tell their story only once, with any community partner interactions happening within the comfort of Wally’s House.

The services of the organization were first started by Barbara Eels and others as the nonprofit Curry Child Advocacy Team in the late ’90s to help with child abuse investigations. They eventually began operating out of three rooms in the basement of the courthouse with a director’s office, interview room and a meeting room. After Eels left, the organization was brought in under the district attorney’s office. Antunes explained many child advocacy centers around the state operate under district attorneys, juvenile departments, hospitals and as complete stand-alones and a medical model.

“We are not quite a medical model yet but we’ll get there,” said Executive Director Jackalene Antunes.

Antunes started with the county in 2014 as a half-time employee doing interviewing, grant writing and coordinating the multi-disciplinary team. She received training and became a forensic interviewer. Previously, she had worked in residential treatment centers in Texas with children who were termed “emotionally disturbed” back in the ’80s. They were children who had come from homes that were abusive.

She briefly worked in the Curry County Juvenile Detention Center and then took a job with Riley Creek School as their time-out detention room person where she acquired the title of “behavior specialist,” before returning to the juvenile department where she was laid off during funding cuts. She became a volunteer with Court Appointed Special Advocates and continued to advocate for children.

“When this came up, it was perfect,” she said. “I didn’t think it would turn into what it has, but it has kind of morphed into a county service.”

She went to directors’ trainings and meetings for the network, called Oregon Child Abuse Solutions.

“I saw other centers and I saw what a center was supposed to be,” she said.

During a Soroptimist’s trip, Jeri Honeycutt shared with Antunes she wanted to do something for the community, and one of those things was to create a child advocacy center. She bought the commercial property in December a few months after Wally died in summer 2014, and started to remodel the space by March 2015. By October 2015, they were moved in.

“It was a very smart thing,” Antunes said, “because I had someone who was sitting on a committee for the county some years later ask me, ‘Would it be a hardship on you if the county sold the building?’ I said, ‘Yeah it would be a huge hardship and they can’t because they don’t own the building.’”

The building was still owned by Honeycutt and the county paid a dollar a month for rent.

Antunes has been onboard from the beginning and has continued to guide the organization toward greater independence from county government. A little over a year ago, Wally’s House became a fully independent Child Abuse Intervention Center with no ties to the county and funded solely through grants and private donations. At the end of that first year of independence in 2020, Honeycutt, in recognition of the work of Antunes and the board, signed over the title of the building to Wally’s House.

The organization has grown with grants from Oregon Community Foundation and Collins Foundation. They provided the necessary bank funding to operate their Victims of Crime Act, which reimburses the center quarterly for services to victims. They also operate with a Child Abuse Multi-Disciplinary Intervention Fund that provides the training for the multi-disciplinary team of child advocate, forensic interviewer and medical examiner.

Wally’s House operates on about a $300,000 annual budget. They provide forensic interviewing services countywide for Port Orford Police, Brookings Police, Gold Beach Police, Curry County Sheriff’s Department, Oregon State Police and they have even assisted the FBI by providing use of their facility to FBI staff. The first year, Antunes conducted 17 interviews. A few years later, she had 54 cases. They average more than 40 cases each year. Antunes would like to grow further and add a therapist to the staff.

When someone has reported child abuse or if a child has injuries, either law enforcement or the Department of Human Services contacts Wally’s House. If a child has physical injuries that are hard to explain, they do what’s called a Karly’s Law exam. The law was named after a three-year-old Corvallis girl who died from abuse when allegations were not investigated.

“The training that I and other forensic interviewers have is through the Oregon Child Forensic Interviewing Training,” she said. Interviewers are awarded a nationally recognized certificate. “If it’s determined that something definitely happened, then law enforcement can go out and make an arrest, or DHS will work with the family to try to keep the child with the family if there isn’t a protective order or put the child in foster care if they can’t leave the child with the parent.”

Antunes gave The Pilot a tour of the facility. A separate doorway for families opens from outside to a cozy reception area that is outfitted with a child’s table, chairs and toys. The warm and comfortable atmosphere is by design to put children and families at ease, looking more like Grandma’s house. It’s a big improvement over the sterile, somewhat public facilities at the previous location in the courthouse.

When the family comes in, they fill out paperwork and meet the team. The child gets to see the whole building. They know who’s going to be watching, where all of the cameras are located, and where people are watching the interview.

“A successful interview for me is where I’ve created a rapport with the child and they feel like they can talk with me about anything, whether they have something to disclose or just know that an adult is listening to them and can tell me about their favorite doll,” she said.

The cameras feed the information to an observation room where law enforcement, DHS case workers and the district attorney can watch the interview to determine whose jurisdiction, if any, the case falls under.

Dr. Harris provides Karly’s Law medical exams on site in their medical room, with an adjoining bathroom where specimens can be collected and passed through. They have a special camera in the exam room that can detect subcutaneous injuries. The Church of Latter Day Saints donated equipment that provides UV sanitizing to equipment, electronics and keys. Other equipment sanitizes the entire room with UV for both the medical exam room and the interview room.

The facility has a board room for meetings. Custom tables from a furniture maker in Brookings were donated by Dr. Raymond Harris and his wife Karen to replace the folding white Costco tables and lawn chairs they started with after moving over from the County. Another business donated the oak chairs. Nearly everything in the building has been donated, from changing tables to office equipment and furniture.

Having the house has made a difference in the number of services they can provide.

“It was a fitting and generous gift to the organization and the children of Curry County,” Antunes said. “It is with deep gratitude and appreciation Wally’s House staff and Board wish to recognize Jeri’s understanding of what a Child Advocacy Center and its services should be. This knowledge has ensured every child in Curry County that requires specialized services provided at such facilities, will now have them.”