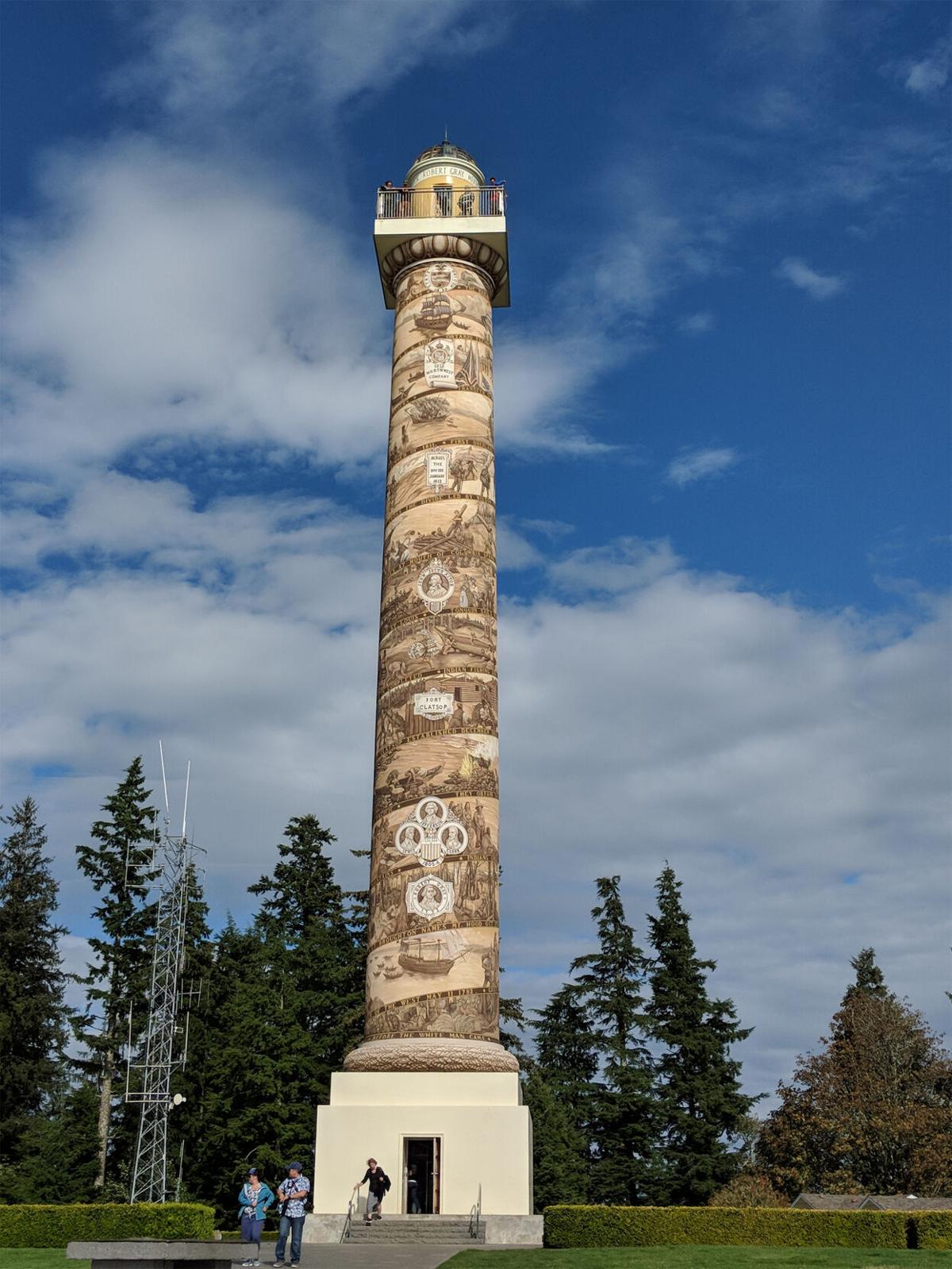 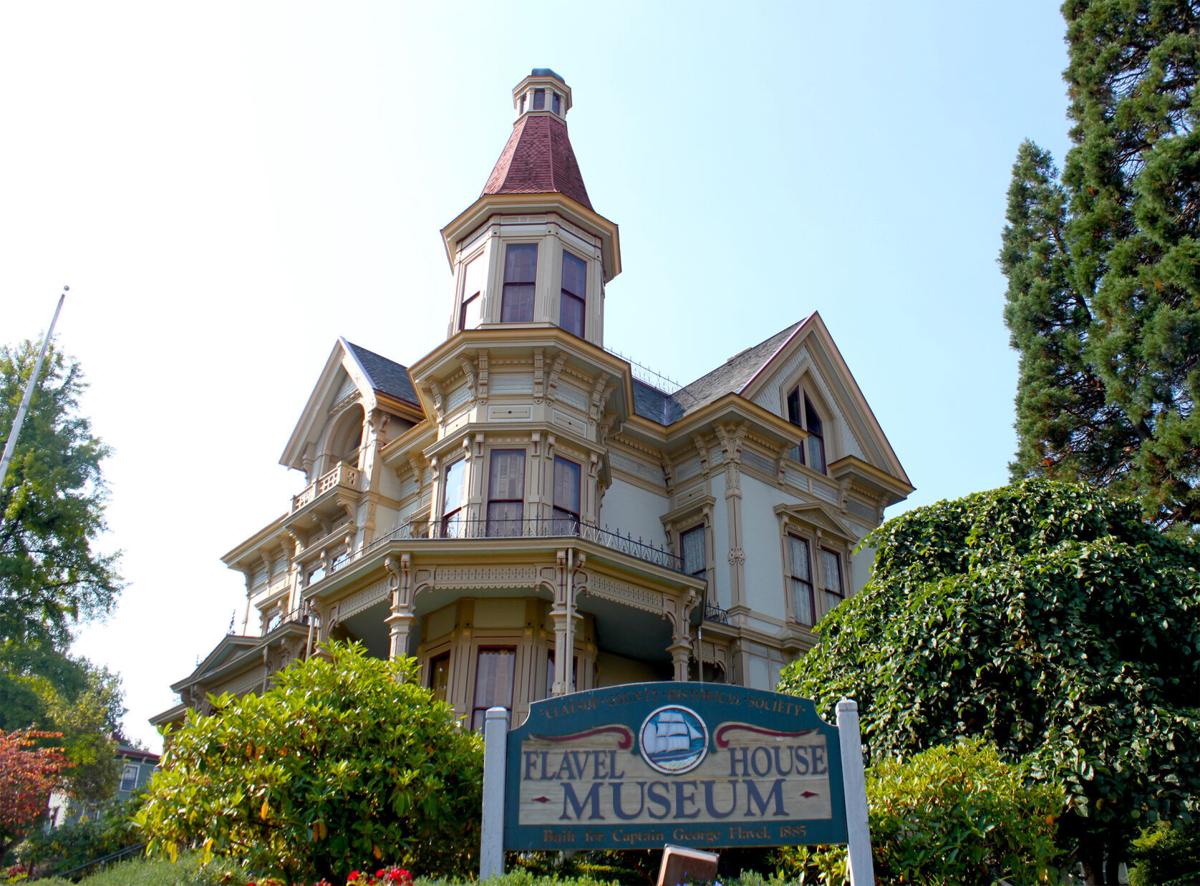 The Flavel House Museum in Astoria on a sunny day.

The city and environs of Astoria strike most visitors as the kind of place where pirate loot might be stashed away.

Certainly it seems to have struck Steven Spielberg that way, back in the early 1980s, when the legendary pirate-treasure film The Goonies was being shot.

But the town may actually have come by this impression honestly. There are still a few stories about hidden treasure in and around Astoria -- not counting the silver-screen “Goon Docks” story of “One-Eyed Willy.”

And who knows? One or two of them may actually be true.

This story is actually not a pirate-loot story. But it’s not much less compelling for all that, and it’s arguably more likely true than false -- although the chances that the treasure is still around and discoverable are vanishingly remote.

The story has its start in a rude cabin, now long gone, that lay near the base of Coxcomb Hill.

Coxcomb Hill today is arguably the most prominent feature of Astoria. Perched on its top is the Astoria Column, patterned after the Trajan Column in Rome, jutting 125 feet into the sky from atop the summit, painted in a spiral pattern with a sort of pictoral history of the city and the state.

Inside the column is a spiral staircase that you can climb, so that you can look out over the entire area from its top. The view is spectacular.

The column was built in 1926, financed by the Great Northern Railway and the heirs of John Jacob Astor.

The story of the Coxcomb Hill Cache takes place a few years before construction got started, though, in the early 1920s. At the time, the hill was thickly wooded and outside the pale of development.

An old man had lived a quiet, frugal life in this little shack for many years. But by the early 1920s he had gotten frail enough that he couldn’t really continue. Finally he fell ill and was taken to the hospital in terminal decline.

The county assumed, based on the man’s lifestyle, that he had no money to cover his hospitalization and anticipated burial expenses. The old man knew this, and it bothered him. So he pulled one of the nurses aside and assured her that he had plenty of money to cover his bill with. And, as it became increasingly clear to him that he was dying, he added some details: He had $10,000 stashed in a coffee can, hidden in a hollow stump 50 feet from his cabin. He’d hidden it away, because he did not trust banks.

(This was actually common in the 1920s. Many people had been ruined in the depression of 1893 by losing their deposits when banks collapsed, and never trusted a bank again. The old man would have been about the right age for this to have happened to him. Readers who remember “The Tower Treasure,” the first Hardy Boys novel (1927), may remember distrust of banks as being one of the details used to show the old, miserly, and curmudgeonly nature of character Hurd Applegate.)

The nurse passed the word along to the hospital administrators, who promptly sent a group out to find the hollow stump and retrieve the cash.

A more thorough search by a group led by the county sheriff followed, and again, drew a blank.

Over the years since, the story of the Coxcomb Hill Cache has gotten plenty of play in Astoria; and, the area being open to the public, thousands of locals have roamed the slope over the years in quest of the treasure.

Is it still there? Maybe.

It’s much more likely, though, as Ruby El Hult points out in her book, that one of the hospital staff members raced out to the scene ahead of the larger search party and snagged the can before they got there. Ten thousand dollars was, of course, a lot of money in 1923 or so -- just over $150,000 in modern coin -- but it’s not a large enough sum for its source to have been hard to conceal or explain, if someone did find it.

The second hidden-treasure story is much less likely to have any truth to it; but it’s a far more romantic yarn, involving a haunted house, a chest full of gold, and a character who had probably been called a pirate more than once by his business rivals.

This “pirate” was Capt. George Flavel, one of the most important mariners in Astoria’s history.

Flavel first came to Astoria in 1849 as skipper of a sailing brig. He must have liked the opportunity he saw, because he was back the next year, serving as pilot and first mate on a steamer, and promptly applied for and received the Columbia River’s first-ever bar-pilot license.

Moving quickly, Flavel amassed a small fleet -- tugboats and a pilot schooner -- and ruthlessly fended off attempts by other local swells to horn in on the bar-pilotage game. Left with an effective monopoly, he jacked up his rates as high as he could and started piling up profits.

(Interestingly, he was able to maintain this monopoly for at least 10 years. According to his widow, he did so by being so fearless and so competent that shippers considered him worth the premium.)

By 1858 he had made so much money from bar pilotage that he found his time was better used managing his many onshore investments; so he hired a pilot to run his bar-pilotage service and set about turning the money he had amassed into even more money.

By the early 1880s Flavel was extraordinarily rich, but getting well on in his years. And that is when he built the colossal Queen Anne-style mansion that bears his name.

The 11,600-square-foot mansion would be Flavel’s home from its completion in 1885 through his death in 1893, at the age of 69. His family continued living in the place for 40 more years, finally turning the property over to the county in 1933 as a museum, which is now run by the city of Astoria.

(By the way, Astoria has another Flavel House -- built in 1901 by Capt. George Flavel’s son, Capt. George Flavel Jr. (yes, he actually followed in his father’s footsteps and became a sea-captain too). This newer Flavel House, from outward appearance, looks like a much more likely place to find ghostly hauntings and hidden treasure; and there is quite a story connected with it. But it’s rather a long story, so we shall have to save that one for another time.)

According to the legend, during the last eight years of his life while living in his mansion, Capt. Flavel hid away a large stash of money somewhere in the old house. And after his death, supposedly the old captain’s ghost wanders around the upper floors of the house during stormy nights, watching over his stash of sovereigns.

To be blunt, the chances there’s any truth to this story at all are vanishingly slim. Flavel was a millionaire with a huge portfolio of investments; why would he hide gold in the woodwork around his house? Granted, he might have gone a little loopy in his old age, but he was only in his late 60s when he died, and I haven’t come across anything to suggest he had lost his marbles in the runup.

Family members and friends and business associates of the old skipper have also, over the years, laughed the legend to scorn. They say it would have been very out of character for Flavel to have done anything of the kind, and that none of them had or have ever heard even a whisper of a hidden cache of loot.

Although, of course, if there were anything to the story, they would be foolish to admit to it, wouldn’t they?

In any case, the curators of the Flavel House are not about to let a bunch of rampaging treasure-hunters into the place to scratch at the woodwork and thump on walls in quest of secret passages. So slim as are the chances of this one being true, even if it were real no one would be able to do anything about it.

Still, it’s a fun thing to think about while exploring the museum … especially if you’re lucky enough to be there on a blustery, stormy day.

Finn J.D. John teaches at Oregon State University and writes about odd tidbits of Oregon history. His book, Heroes and Rascals of Old Oregon, was recently published by Ouragan House Publishers. To contact him or suggest a topic: finn@offbeatoregon.com or 541-357-2222.

Offbeat Oregon: Not all fugitives hiding out in Oregon were running from the law

Sometime in 1915, a 40-year-old Black woman named Frankie Baker stepped off the train at Portland’s Union Station. She had come to stay; Orego…

Are ready for Daylight Savings Time to end on Nov. 7th? Remember we 'Fall' back an hour.

Sea otters could be returning to Oregon Coast

Sea otters could be returning to Oregon Coast